Anwar Ibrahim was furious at the very act of a ‘charm’ being placed under AAB’s table in UMNO Headquarters (where he, Anwar, unfortunately is no longer welcomed).

In Parliament he demanded to know (no, not why the charm was placed so near to AAB’s cawat) why it was found under Abdullah's desk and not that of his deputy Najib.

Oh BTW, I had a serious discussion on the ‘charm’ with a well-known saikong (Taoist priest) in my kampung, who then referred me to his muhibbah matey, my village bomoh – all these by mobile of course.

Pak Bomoh told me it was placed there by a certain someone to keep AAB wide awake, following criticisms he was zzzzzzzzzzzzzz during meetings.

Sounds like a good deal so I asked Pak Bomoh whether I could have one with an opposite effect, namely to help me sleep more soundly as I have been tossing and turning in bed.

The wily old man, who knows me since I was a toddler, told me (with a sly grin): “Cucu bukan Muslim ‘kan. Minum mabuk cukup lah.”

;-) The witch doctor is great! 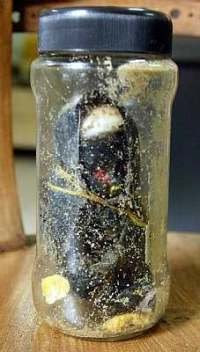 (1)Jinn in a Nescafé Bottle