The above was taken from Utusan Malaysia’s headlines. It says that Raja Munir Shah Raja Mustapha, the deputy head of UMNO Tanjung questioned the State’s government’s motive in having road signs bearing more than just one language – namely, in Jawi, Chinese and Tamil.

Four days ago, on 24 Oct, the State government announced that it has approved the City Council’s plan to have road signs in the three local languages for those roads identified on the heritage listing. The heritage program would only be carried out in Georgetown.

Raja Munir doubted that the purpose has been for tourism. He accused the DAP-led State government for playing on trivial but populist issues. What about something substantial for the people, he challenged Lim GE’s government!

Besides, he argued that romanised Bahasa, apart from being the official national language, can be easily read by anyone, so what’s the purpose for the current bullsh*t - okay, kaytee has spiced up the language (pun not intended) a bit.

He advised us not to be taken by DAP’s guile as its (DAP’s) primary objective is to disrupt the multiracial harmony. He demanded that the State government respects the national language.

Then his Youth Leader Jeffri Salim said that they (presumably the Youths) will protest against those multi-language signs and demand they be removed. He said basically the same stuff, that people must respect and be proud of the national language yadda yadda.
I hope he doesn't do anything silly, like vandalising the new road signs on heritage listed thoroughfares.
If I recall the purpose of the heritage names, it was more than just having road signs in, as an example, the Chinese language. The nearly 200-year old Chinese names for the roads would be put up as well.

For example, until I read the Star Online article on this recently I wasn’t aware that Gu Gan Tang (cattle’s pen) is Lebuh Muntri (Chulia Street). For years, my mum and aunties would be yakking away about this and that in Gu Gan Tang (pronounced Gu Garn Tarng) without me ever realizing it was Lebuh Muntri, a street I knew quite well. 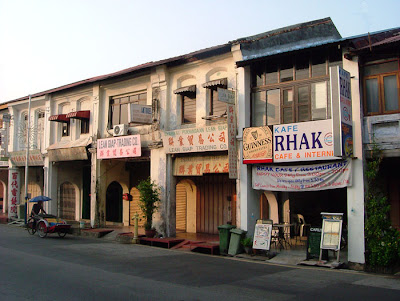 Lebuh Muntri (Chulia Street) or Gu Gan Tang
OK, I know places like Sin Kay or Campbell Street, which has the best Hainan chicken rice in Penang as well as the best gnow charp t'ng (beef tripe soup with radish, carrots and herbs) - also knew a sweetie there ;-) - but even today I do not know which road or lane is Snua T’au Kay, but which no doubt I had travelled zillions of times along it. 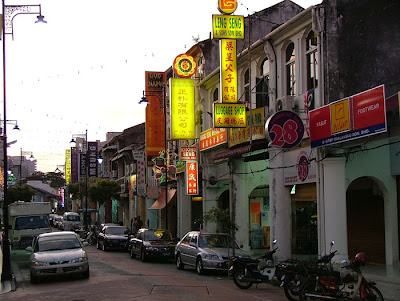 So the heritage names would be most welcome, without endangering the prime position of Bahasa Malaysia.

I advise UMNO Tanjung to cease and desist from driving a wedge between the people of Malaysia. Let’s look for commonalities rather than differences.

photos taken from http://penangpage.com/chuliast/ - thanks!