Lamis Andoni is an independent journalist who has been covering the Middle East for 20 years. She has reported for the Christian Science Monitor, the Financial Times and the main newspapers in Jordan. A professor at the Graduate School in UC Berkeley, she is also the Middle East consultant for al Jazeera.

She wrote the following article for al Jazeerra

********
US president George Bush's attempt, at the World Trade Economic Forum in Egypt, to ease Arab anger over his speech to the Knesset is too feeble and too late.

Bush had addressed the Israeli parliament, on Israel's 60th anniversary three days ago, saying the establishment of Israel had been "the redemption of an ancient promise given to Abraham and Moses and David - a homeland for the chosen people Eretz Yisrael".

By portraying the creation of Israel as a biblical fulfilment, he bestowed divine legitimacy on the process of its establishment and also cast the Palestinians' narrative, along with their rights, outside of the realm of history.

Not surprisingly, some right-wing Knesset members reacted by hailing Bush as being "more Zionist than Israeli prime minister Ehud Olmert".

From their viewpoint, while Olmert and other leaders are ready to cede parts of the 'promised land', Bush was vowing to support and preserve the Zionist dream.

'No honest broker'
Bush's words punctured a deep place in the Palestinian collective psyche on the day of remembrance of their own dispossession.

They also drew criticism that the US could not be realistically viewed as an 'honest broker' in the conflict between Israelis and Palestinians.

Bush's bias in favour of Israel is not new and did not come as a surprise to Arabs and Palestinians.

But it was his blatant denial of Palestinian history and his unquestioning endorsement of the Zionist vision and perspective that will resound for generations to come.

By exclusively acknowledging the Zionist narrative, and an extreme version at that, Bush has struck against the very essence of the Palestinians' struggle - the fight to reclaim their collective memory of that of their homeland.

It is this fight that preceded and fuelled the armed and political struggle that forged the contemporary Palestinian liberation movement.

It was, and remains the story of the Nakba, as Palestinians call the establishment of Israel, that is told and retold that form the basis of Palestinian memory.

Al Nakba - 'The Catastrophe', as the Palestinians refer to the loss of Palestine - was first used by Qonstantin Zreik, the eminent historian, and it resonated with Palestinians who felt the shattering blow of the calamity of loss and dispossession. 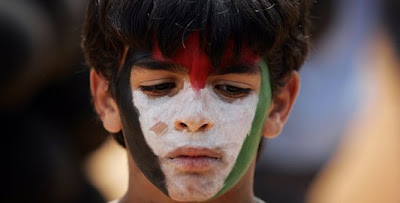 The creation of Israel meant a loss of life as they knew it as well as displacement and exile.

When Bush, the leader of the world's reigning superpower, denied the Palestinians their loss he was also denying them their past and their future.

By not acknowledging their past, he reduced his promise to support a Palestinian state to a conditional act of charity that Israel could bestow upon the Palestinians when and how it sees fit.

'Vacuous promises'
More significantly, his denial of Palestinian history rendered his promises vacuous - not least because Bush is about to finish his term in the White House, and his speech showed no intention of curbing Israeli expansion into the land where a state is supposed to be established.

In his promise to honour the Zionist dream, Bush omitted the reality of the Israeli occupation, as he pronounced all the Palestinian territories part of the promised Eretz of Israel.

However, far and beyond the politics of a failed negotiations process, Bush has committed a more serious blunder.

His words are likely to provide a powerful catalyst for a new generation of Palestinians already mobilized by a desire to reclaim their memory, history and perspective.

What Bush does not realise is that this new generation, from around the world, will view his words as an extension of a long and systematic Israeli effort to wipe out Palestinian memory.

Israel's destruction of more than 500 Palestinian villages inside Israel - many of which were renamed after being transformed into parks and recreational facilities - as well as the continued destruction of lands and their replacement with Jewish settlements in East Jerusalem and the West Bank, are all part of what Israeli historian Illan Pape has named an act of 'memory-cide'.

With his words, Bush was endorsing this 'memorycide' committed by Israel.

Cultural resistance
But Bush's words will face resistance; not armed resistance, but a resistance borne out of the Palestinians' rejection of these attempts to wipe out their memory.

Ironically, this new wave of cultural resistance is a direct outcome not of the long Israeli occupation but of the failed so-called Middle East 'peace process'.

It was the 1993 signing of the Oslo accords and the agreements that followed that drove home to many Palestinians a realisation that the process was not only providing cover to a gradual disintegration of Palestinian lands, and consequently Palestinian statehood, but the fragmentation of the Palestinian people as around two thirds of them were left out of the deals.

The 50th anniversary of the Nakba a decade ago triggered another wave, unprecedented in its scope, to revive, record and preserve Palestinian memory.

Names of vanished villages were recalled and embroidered into tapestries that were exhibited around the world.

By 2000, movements advocating the right of return for Palestinian refugees were sprouting from inside refugee camps across the Middle East to as far as Boston, Massachusetts, in the United States.

'Enforced forgetfulness'
The exclusion of Palestinians, embodied in the Oslo accords and the process that followed, prompted them to rediscover and reassert their version of their history.

The recording of oral history, writings, literature, songs, film, and arts in all forms and languages by Palestinians, including the sons and daughters of immigrants in America and Europe who barely speak Arabic, became acts of resistance against enforced forgetfulness.

But it was the failed negotiations at Camp David in the US in 2000 that provided the impetus for a widening awareness of the importance of Palestinians preserving their history and collective memory as a form of resistance to what was seen as attempts to make them give away their rights.

The so-called 'generous offer' by then-Israeli prime minister Yehud Barak, supported by Bill Clinton, the US president at the time, was a turning point.

When Barak proposed fragmented entities in the West Bank and the Gaza Strip, devoid of real sovereignty, in return for forsaking Palestinian national historic rights, it became clear to the Palestinians that it would be a battle for their consciousness that would determine their future.

At the meeting, President Clinton supported the Israeli perspective, one that effectively accepted an Israeli prerogative to determine the amount of territories it cedes to the Palestinians without giving them ultimate control over their border, the sky above and the water underneath their feet.

In other words, Israel was not proposing to withdraw from portions of occupied land but just making 'territorial concessions'.

The realisation was a blow to Palestinian aspirations to exercising-self determination.

Many realised that it was a result of a process that threatened to deny them their identity and history.

But Bush went farther in his insult than his predecessor ever did.

As he celebrated the creation of Israel, he simultaneously denied the Palestinians their past - and even their present.