I have to break an earlier promise to keep the Madeleine McCann posting in No 1 position on my blog, as the arrest of blogger Nathaniel Tan requires urgent publicity to marshal support for his immediate release.

For latest information, please see postings by Elizabeth Wong. Elizabeth has been so stressed and frustrated by the police bull and heels dragging on the dodgy detention of a citizen that she (most unusally) blessed all readers with colourful exopressions. Thank you Elizabeth for expressing our similar feelings along as well.

There is also a malaysiakini video clip (7 minutes).

KTemoc supports and calls for the immediate release of Nathaniel Tan. The police action has thus far been unjustified by normal standards of democratic process or even national security considerations, and thus represents yet another case of oppressive repression of free speech and draconian persecution and intimidation of law abiding citizens. 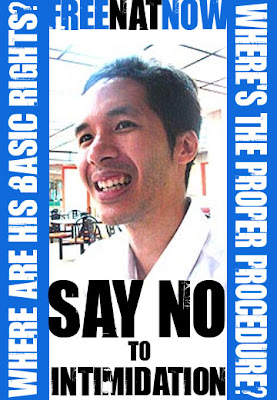 However, I slightly disagree with Elizabeth that we should lodge our outrage at the unjustified persecution of Nat with the IGP and not the PM.

I believe (I love conspiracy theories) this bull (painful for Nat and family) could possibly be a result of the current acrimonious IGP-Johari Baharum confrontation - OK, it's just a suspicion.

Anyway, based on my suspicions I doubt the IGP will move a bloody finger. Thus, I prefer to call upon the PM concurrently the 'Police' minister to instruct police to release citizen Nathaniel Tan immediately.

If dear AAB is in elegant non-listening, can at least someone on the 4th Floor please act on behalf of daddy. KJ had, while lodging a complaint against Tian Chua with the media watchdog recently, claimed he wasn't against free speech especially on the Internet. So, c'mon KJ, do something and show you aren't with the dark side all the time.