Well, Aussie Muslim ladies aren’t going to deny themselves one particular popular Aussie lifestyle, that of frolicking on the sunny beaches of Oz, but they still intend to maintain their Islamic dress codes.

So an ingenious designer, Mecca Laalaa, just a sweet 22, has created the the two-piece ‘burqini’, obviously a hybrid of burqa and bikini. 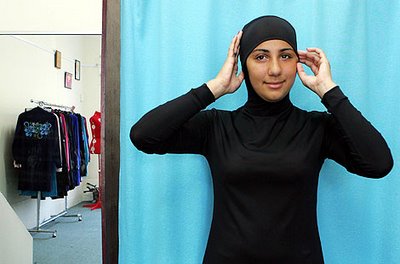 One immediate effect (and benefit) of the burqini is now reshaping the pattern of surf lifesaving, once monopolised by white Australians including wonderful bikini-ed damsels. The burqini uses lycra to present a unique cover-all swimming costume, so encouraging Muslim women to be on Australian beaches, even as lifeguards.

The NSW premier is supportive of the participation of Muslims as lifeguards, with a hope that racial tensions stemming from last year's race riots between ethnic Lebanese Australians and white Australian youths at Cronulla Beach in Sydney's south, would be diminished if not eliminated.

Laalaa said: "I am Australian so I always have the Australian life style, but now with the burqini it just allowed me to participate in it more. We used to always go to the beach, but now that I have the burqini I can actually swim."

Laalaa is one of 24 young Australians of Arab heritage who have recently signed up for a 10-week training course run by Surf Life Saving Australia aimed at widening the racial mix on beaches.

The full-length lycra suit with hijab head-covering is not too figure hugging to embarrass (damn it), but is tight enough (OooKay) to allow its wearer to swim freely.

Now, here’s a sensible and relevant sell for Islamic wisdom - burqini manufacturer Aheda Zanetti, who sells her burqinis for up to $A200, said: "We are also encouraged in Australia to cover up not due to modesty but for sun protection, so this is not just a modesty aspect swimming suit, it is also a protection against the sun, surf and sand."

She hopes the burqini would be adopted by non-Muslims as well, as a sensible protection against the dangers of overexposure leading to skin cancer. Probably Australians (and Kiwis) suffer most from skin cancer because of the damaged ozone layer over the South Pole.

The controversial Mufti of Australia, Sheik al Hilaly, who was alleged to have described scantily dressed women as 'exposed meat before prowling cats', has approved the design and its wearing.

But I hope he leaves the wearing of the burqini to the ladies and not take it upon himself to adorn one – it would be a terrifying sight that would definitely scare away the feline prowlers ;-)