Star reporter Priscilla Dielenberg wrote a great story, of Tan Tatt Ghee, the owner of Hai Boey Seafood Restaurant, coming across 118 Olive Ridley baby turtles making their way out of the sand at a beach near his shop in Teluk Kumbar here and then ensuring that those reptiles made it safely to sea. 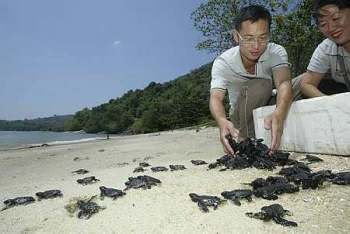 Priscilla quoted Tan stating that: “It would be very chek ark if any harm should come to these endangered creatures.”

It’s a great story and I salute Tan and family for their love of the wildlife, and ensuring those baby turtles’ safe progress into the sea. His bonus is that the number 118 is an auspicious figure, portending a great start to his family's Chinese New Year.

However, the translation of chek ark as ‘wicked’ is not exactly correct.

I believe it means ‘cruel’ rather than ‘wicked', though one could argue they are inter-related. In fact and more specifically, chek ark would be more of a ‘cruelty’ that could be avoided’ but wasn’t.

One could even argue it’s a passive form of ‘cruelty’. An example would be the perpetrator becoming ‘cruel’ through inaction, perhaps because of laziness or apathy - like quietly watching chooks about to be burned in a coop that has just caught fire yet not taking any action to release the fowls - it'll be more than foul play (pun intended) - in fact it'll be chek ark.

But ‘wicked’ in Penang Hokkien should be, in my humble opinion, tork, which can also mean ‘poison’ or ‘poisonous’ – now isn’t that just ‘wicked’?

Was a former girlfriend of mine tork or chek ark when she wrote me a Dear KTemoc letter? Alas, I can't comment because I am an interested party - you know, the issue of 'conflict of interest'.

I am not sure who advised or translated for Priscilla? However, knowing many Dielenbergs in Penang and Kulim, I wouldn’t be surprised if she did it herself, as most of the Dielenbergs I know speak fantastic Penang Hokkien like the natives they are.

But definitely chek ark is less ‘wicked’ and more ‘cruel’. I am convinced Tan Tatt Ghee had meant ‘cruel’ too.