I read RPK's Chinese hypocrisy at its best and Bak-kut-teh is NOT chik-kut-teh with much amusement and, alas, a wee spot of shame because RPK's condemnations of the hypocrisy of some Chinese Malaysians have been spot on. 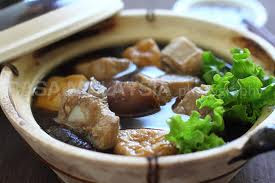 The issue revolves around the notorious Alvivi Duo who recently stirred steamy shit with their bah-kut-teh buka puasa provocation.

Some Chinese Malaysians in a kniasu attempt had jumped swiftly into defending the naughty duo, arguing pathetically on semantics, namely that the Chinese-Hokkien word 'bah' literally means 'meat' and should not be taken to imply 'pork' whence it could then have meant 'chicken' or even 'beef', and thus there was no insult in the duo's Facebook greetings to Muslim to buka puasa with a bowl of delicious bah-kut-teh.

One of the kniasu group had even argued that bah-kut-teh refers to the herbal ingredients rather than the meat they flavour. 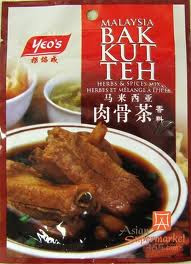 That's not only kniasu attempts but arguments of pure grade bullshit, wakakaka. Incidentally on a side issue, the Ah Beng word of kniasu always reminds me of Miss Muppet, wakakaka but sorry lah, I can't tell you why, wakakaka again.

'Bah' (meat) in the context of bah-kut-teh and in many other compound words prefixed by the 'bah' word are all cooked with and consisted of mainly pork despite no 'pork' word in them, like:

Please note that I wrote the Secret Soup series back in 2007, six years ago, when I explained the significance of the word 'bah' (then spelt by me as 'baa') in the above last phrase (in yellow highlight).


If chicken is used, then we would get labels like the quasi-Anglicised chi-kut-teh or the Chinese kay-moi (as opposed to just bah-moi).


There is no literal language indication of pork in the description of char siew (literal translation = skewered barbecue), but every Chinese in Malaysia, Singapore, Hong Kong, Macau, Australia and southern China (and perhaps even elsewhere) knows the char siew dumpling is stuffed with barbecue pork.

Why then have some Chinese attempted to bullshit their way (on behalf of the Alvivi duo) through the bah-kut-teh fiasco?


If you'll allow kaytee his usual Freudian indulgence, the kniasu attitude can be traced to the traumatised (younger generation) Chinese Malaysians who want to 'strike back' at those they perceive as their arrogant oppressor.

It's not unlike the lamentable spew of anti-Muslim emails I receive almost everyday, most of which originated in the USA. Some Yanks still angry over the 9/11 incident (but ignoring their nation's despicable oppression and exploitation of many Arab countries), and probably frustrated with their nation's non-nuking of everything Arab or Muslim, gave vent to their invincible hatred for their turbaned foes through such hate emails, YouTube videos, cartoons, etc involving fabricated allegations, insults and wilful fantasies.

Those Malaysian 'nons' seek surrogate targets for their anger at what they see as ketuanan Melayu arrogance and 'oppression', and thus would gleefully join in or support any US-European-Australian-Israeli media-bashing of Arab and Muslim.


They even revel in bullshit fantasies such as Japan not having any diplomatic relations with Muslim countries (what an ideal country for Chinese, one responsible for the Rape of Nanjing) or Robin Williams (a most liberal American) delivering a fabricated anti-Muslim warning.

But in doing so, they violated one of the traditional Chinese cautions (or advice), namely, 'don't use a long bamboo pole to knock everyone down'.
Posted by KTemoc at 10:57 am