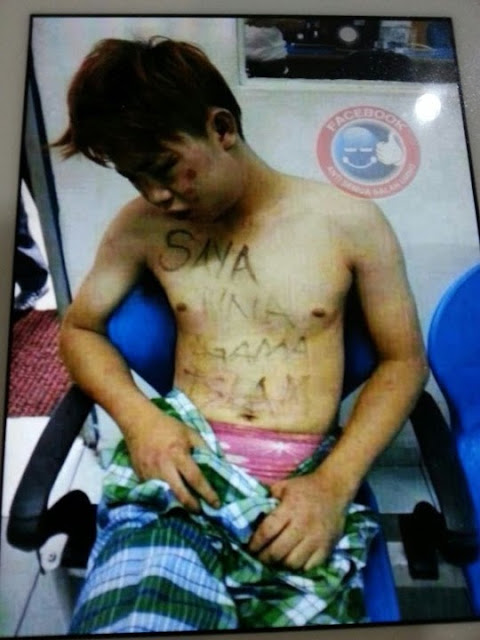 The Malaysian Insider - My case has nothing to do with sex bloggers, says youth who was abducted


The youth who was abducted and assaulted by a group of men in Shah Alam and had the words “Saya hina Islam” written on his body said his case had nothing to do with the hot issue involving the controversial sex bloggers’ Ramadhan photograph.

Ng Mun Tatt, 21, said he was abducted for money and that the words ‘Saya hina Islam’ were a tactic by his assailants so that he would be beaten by the public if he tried to escape.

Ng said he is stunned how his photograph taken at a police station was leaked and went viral on Facebook even before his statement could be taken by the police.

“I was more shocked when the police said yesterday my case was triggered by the sex bloggers’ case,” he said at a Press conference in Klang today.

“I don't even know anything about them, nor have I offended anyone recently.”

It was the Inspector-General of Police Tan Sri Khalid Abu Bakar who told reporters in Bukit Aman yesterday that Ng’s case could have been triggered by sex bloggers Alvin Tan and Vivian Lee's controversial Ramadhan greetings photograph of bak kut teh on Facebook.

Sooner or later this and more would have happened. The racial-religious-political climate in Malaysia is now so tinder dry which makes such event inevitable.

Recent events haven't help like the Vatican in undiplomatically raising the Allah word issue again when we have both the Home Minister and IGP under pressure, one from his party election campaign and the latter from strident public calls for his immediate resignation in the criminal case of a death-in-police-custody, and a Malaysian public on steroids through daily dosages of racial-religious incitation and blatant fabrications.

Then a couple of idiotic publicity hounds added to the simmering likely-conflagration by posting provocative photo and remarks in Facebook, though I have to say the proposal to invoke the Sedition Act in their provocation was way over the top and if processed, would be a gross abuse of the law.

Naturally the BN-government's and police's double standards in going after the idiots while ignoring their own provocative idiots have been breath-taking, but then this is BN's Malaysia Boleh.

Back to Ng Mun Tatt - Not only was he beaten up and accused of insulting Islam, his photo taken by police with the words "Saya hina Islam" scrawled on his chest was posted on the Net and which went viral.

I wasn't aware that police have this role of posting as-yet unsubstantiated accusations on the Net?

And a besieged IGP (besieged for his bull about a death-in-custody case) made some rather irresponsible as-yet unproven connections between Ng Mun Tatt's case and the idiotic Alvivi duo.

A TMI commentator by the moniker of MyNation stated: If this fella happened to have insulted the Muslim, I can says, Serve You Right!! To those who abducted, and beaten him, You also have to face the law as you have done something that shouldn't be done.

I would not be surprised that the mindset of commentator MyNation would be the mindset of a number of Muslims, in that Ng Mun Tatt has been 'found guilty' and shall remain guilty until proven innocent.

MyNation then hypocritically made some meaningless dispensational comments on justice by criticizing the attackers-kidnappers but obscenely only after delivering a padan muka to Ng Mun Tatt without even allowing the case to be first investigated to determine whether Ng had in fact 'hina Islam'.

I suppose it's a case of f**k that anyway presumably because MYNation must be thinking: why let inconvenient facts and evidence get in the way when non-Muslims are automatically guilty of insulting Islam.

But quite frankly and don't be surprised by my revelation, that what had happened to Ng Mun Tatt is not unusual or new.

Unless you have been sleeping for the last 30 years, you would know that this sort of duplicity in exploiting religion, one of offenders using religious incitation to mask their crimes have been going on in the BN government and party, where not only agama had been exploited to divert the attention of Muslims away from their corrupt and nefarious activities on to selected 'targets', but also of bangsa dan raja.

And these have been believed by people like MyNation.

You must be wondering "Siapa yang sebenarnya menghina Islam?"
Posted by KTemoc at 10:37 pm