The god of MEN

TMI - The men of God by Zaid Ibrahim 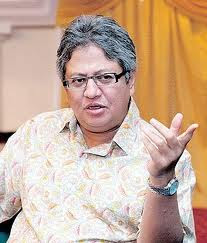 I've always liked Zaid Ibrahim despite my hero Karpal Singh once condemning him when Zaid left PKR. I then wrote Zaid Ibrahim - suffers no fool gladly to give my take on why Zaid was compelled to leave that nest of vipers.

Incidentally RPK informed us that Zaid standing as a PKR candidate in the Hulu Selangor by-election was sabotaged kau kau by a PKR pygmy (thunderous applause please, wakakaka). According to RPK, the pygmy provided UMNO with photographs of Zaid Ibrahim jollying, wakakaka.

Poor Zaid, stabbed in the back by his then-party people. Apparently Eli Wong also suffered the same internal party sabo from the same pygmy. It must be a wonderful party where the musuh is dalam selimut, with members killing off each other rather than the external (real) foe - not unlike someone attempting to knock off the Sifu wakakaka - see my April 2006 post The Master & The Disciple.

Zaid wrote in his article:

AIS is preparing to take action against the four Muslim girls who participated in the Miss Malaysia World 2013 beauty contest in contravention of an earlier fatwa banning Muslims from taking part in beauty pageants. I am writing to appeal to the department to desist from doing so.

Any action by the religious authorities to enforce this fatwa will end up in another controversy that will yet again embarass the Muslim community at large. I am not against the religious council issuing fatwas on any subject they deem fit, but as in the olden days, these fatwas are meant to be opinions of the learned jurists that are issued to guide the conduct of Muslims.

The fatwa should remain an opinion or a guide, as they were when Islam was at its pristine best. In those days Muslims either followed these guides voluntarily or they did not. But they also engaged with the ulama on many societal issues and as a result, these fatwas were sometimes modified based on the community’s feedback. No one was interested in punishing the recalcitrant or the wayward. They focused on finding the right path for the community, because Islam encourages questioning and thinking in search of the truth. The relationship between the community and its religious leaders then was therefore positive, constructive and dynamic.

We are obviously living in a very different era. Power is infectious: the politicians and the rich have it, as do the police and even the members of the underworld. So it’s not a surprise the ulama also want power, which is why they have created so many rules. This gives them the opportunity to enforce these rules, hence exhibiting power and command. But these attempts to flex their authority always fall flat.

I checked and found Zaid correct in fatwa being only a guide or learned opinion by an expert and is not binding in Sunni Islam. The literal meaning of fatwa in Arabic in fact is 'opinion'.

But hang on a minute! Wasn't Salman Rushie condemned to death by a fatwa issued by Ayatollah Khomeini? Indeed he was. So why then isn't fatwa binding on Muslims?

It seems that in contrast to Sunni Islam, Shia Islam considers a fatwa as binding! That's why Salman Rushie had to go into hiding when the Ayatollah issued that fatwa of death for him.

But as we can see below, JAWI has proclaimed a fatwa is binding on Muslims, even in the Sunni Islam (Shafi'i school of thoughts) practised by Malaysia.

This comes after an initial meeting with the contest organiser Anna Lim and another contestant Sara Amelia Muhamad Bernard.

Jawi director Che Mat Che Ali said the investigation is a reminder against anyone questioning fatwas that are binding on Muslims and to protect the sanctity of Islam.

But isn't Shia the only branch of Islam which considers a fatwa as binding?

Now, which is which, or what is what? We only want to learn in preparation for TITAS. Can some kind Muslim, preferably a sweetie like Sara Amelia Muhamad Bernard wakakaka, help kaytee improve his knowledge on Islam?

Or has Shia Islam and its practice and beliefs infiltrated our Malaysia so deeply?

We need to ask those men in JAWI, JAIS etc. Though Zaid described them as The men of God, I prefer my post to be more appropriately titled 'The god of MEN'.
Posted by KTemoc at 10:42 pm