Revenge of the effete snob

In July 2007, a PKR blogger by the name of Nathaniel Tan was hauled in by the police for investigations on a post in his blog, related to allegations against Johari Baharum. 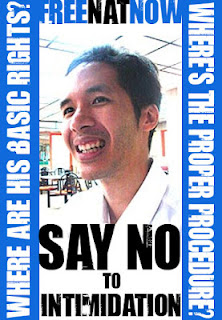 I joined dozens of bloggers in registering our protests against Nat’s detention and appealed for his release – see To PM AAB - Please free Nathaniel Tan.

Nat Tan had once served as Anwar Ibrahim’s private secretary and thus, at that time, an anwarista wakakaka – not sure what he is today. Nat was the bloke who would ask me (via comments in my posts) why I ‘hated’ PKR or Anwar, when I blogged my usual, wakakaka. 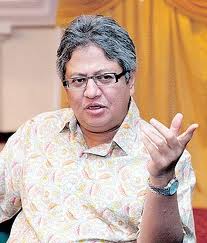 Nat is also the same bloke recently described by Zaid Ibrahim as an effete snob for writing/talking cock, wakakaka, to wit, criticizing Zaid Ibrahim among others for changing political parties more than once. Zaid lambasted him as follows (extracts only):

In Nathaniel’s calculus, one has to be blindly loyal at the cost of one’s own principles to qualify as having integrity.

There must be many Nazis that Nathaniel is proud of, seeing as they stood by Hitler to the bitter end. On the other hand, Sir Winston S Churchill must be a spineless party-hopper since he crossed from the Conservatives to the Liberals then back again.

Churchill had many qualities - some good, others bad - but lacking principle or integrity is not one of them.

Who is this pompous writer to go around with his own constructed “integrity-barometer” castigating others for lack of principle? If he wants to test his mettle and is willing to let others measure the level of integrity in his system, then I bid him welcome to the world of politics.

Just in case you may wonder what Zaid had meant by ‘effete snob’, well, it means a range of things, but I will attribute to Nat the mildest one, namely, an ‘over-refined elite’, someone who is residing (intellectually if not physically) in an Ivory Tower – a dreamer disconnected with reality or the real world wakakaka.

On 02 September 2008, just 2 weeks before the infamous Malaysian bullsh*t of all times wakakaka, I posted September 16 - shall Malaysians 'rise above their goodness'? in which I said the following about Nat:

I have to confess I like Nathaniel Tan, who writes at periodic intervals for Malaysiakini. He is a nice earnest young man who is apparently sincere in the politics he believes in, and in the man he reckons will deliver (on 916) ..... incidentally I share with him some of his former beliefs BUT definitely, absolutely and irrevocably not his latter - wakakaka.

Nathaniel used to work for Anwar Ibrahim – I don’t know what’s that political relationship now but you may bet he’s an Anwar Ibrahim supporter. He has just written for Malaysiakini an article titled Sept 16: What will 'cornered animal' BN do?

The title itself tells you where his political sympathies lie. To him, UMNO is the cornered animal just because Anwar has been boasting about katak-fication, whereas (again according to Nat) Anwar who fled to the Turkish Embassy had merely dropped in for coffee at the ‘invitation’ of the Ambassador - wakakaka.

Sometimes I feel sad that a bright young man like Nathaniel can be so easily bewitched by a renowned snake oil salesman who will promise anyone anything so long as it serves His Brahma-ic Majesty to ascend the political throne.

Mind you, notwithstanding his bias for Anwar Ibrahim, Nathaniel wrote a number of truths in his article. He reckons UMNO may be about to turn nasty towards Anwar Ibrahim, and enumerated the various possibilities.

But he overstretched himself when he alluded to the possibility of political assassination. He wrote: Assassination, in all honesty, is probably still a bargain as well. Yes, there will be a massive uproar, Anwar will be martyred, and discontent will reach unprecedented levels. Yet, at the end of the day, police investigations will be inconclusive, Anwar will be gone, and Pakatan becomes eminently vulnerable.

I don’t believe Malaysian politics would ever sink down to such a level ..... racial riots (chop up a few Chinamen or Indians), yes ..... but political assassination of an UMNO or former UMNO bloke, absolutely no ..... there is a line drawn in the sands of the heartland that won’t ever forgive the person responsible for that. The assassin might as well politically assassinate himself.

Incidentally, Nat is the scion of a well-to-do family where he was known to be picky about food, as once revealed by his ex girl friend, Soon Li Tsin. In July 2007 when he was confined by the police for a couple of days, his GF was allowed to visit him in the cell with some food (probably a local dish), but he asked her instead for gourmet sandwiches wakakaka.


Gourmet sandwiches ;-) hmmm, maybe he was living up to his 'effete snob' image, several years before Zaid dug into him. 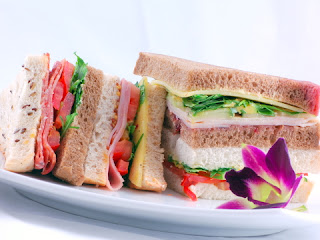 However, Nat recorded a black mark in his Malaysiakini’s article for advocating and rationalizing Anwar’s frog-ology, where I wrote as follows:

... towards the end of his article, Nathaniel put in his bid for Anwar Ibrahim. He wrote appealingly: One controversial option to forestall any such drastic measures by the powers-that-be is for Malaysians to push for a change of government – either by crossovers, or calling for a snap general election (a potential last resort for BN, which is good for democracy, but unlikely to forestall the ruling coalition's demise). 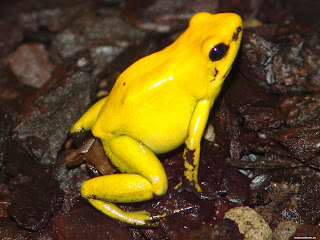 In other words, Nathaniel was justifying and asking the public to support the insidious political frog-hunting which Anwar had successfully demonstrated as his specialty in Sabah in 1994, when he turned Pairin from democratically elected CM into opposition leader with just a few croaks, yes, that disgraceful deformasi subversion of the ballot box to seize power via the grubby back door.

He apologetically rationalized (attempting to fool his own conscience and values): While less than ideal, these remain some of the few ways we can avoid a descent into chaos and desperation within BN, and by extension within Malaysia.

And before I end, a word from Anwar Ibrahim’s favourite author who had, in Anwar’s own words, succoured him while he was in prison:

... Hie thee hither, that I may pour my spirits in thine ear, and chastise with the valour of my tongue all that impedes thee from the golden round ... (Macbeth 1.5.25-28)


We are told that the ambitious Lady Macbeth (who wants to be Queen) said the above to persuade her husband to ‘rise above his goodness and accept her evil ways’ if he wanted to succeed.

But today I must confess I am absolutely delighted that Zaid Ibrahim’s effete snob wakakaka, my dear Nat Tan, beat me to excoriating Netto.

Well, effete snob or not, Nat came up with a letter to MKINI titled Netto berates Faekah - for doing the right thing? lambasting (not dear Nat’s style to lambaste wakakaka) chiding Netto for his article Selangor MB's pol sec Faekah at bay, and Netto certainly deserves it.

Once I posted that whenever Netto writes, you can be sure of two things: apart from requiring a dictionary, he’d be promoting Anwar Ibrahim, which led my dear Susan Loone to wakakaka in Facebook.

In fact, in an earlier post Evangelist or Charlatan of Democracy? I revealed how utterly flabbergasted I was by the extent to which Netto used his penmanship to support Mr Manmanlai.

In Netto's Malaysiakini article The link between Anwar and Dickens he unbelievably made a preposterous comparison between Charles Dickens as the supreme artist of democracy and our Defective Defacto Anwar Ibrahim. 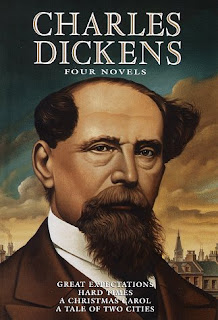 But Netto exceeded the bounds of rational belief in the above mentioned Malaysiakini article, where he wrote the following in praise of Anwar:

Evangelist for democracy? And dear , what democratic message did your Anwar Ibrahim send to us when he attempted to seize government with his shameless 916 tomfoolery?

Apart from a wrong choice of word in ‘evangelist’ (which those religious hounds might exploit to Anwar's disadvantage) I have only three words, all starting with ‘P’, to describe Netto’s adulation of Anwar Ibrahim as a paragon of democracy, namely:

What drew Nat Tan into his current criticism of Netto has been the latter's latest piece indirectly supporting Anwar – and what do I mean by ‘indirectly’?

Given the symbiotic relationship between Anwar and his darling boy where it's virtually impossible to separate their individualities, I opine that Netto’s article was in support of darling boy because it was a chastisement of forces on the opposite side to the blue-eye boy, and thus by kaytee's extrapolation, an indirect support of Anwar. 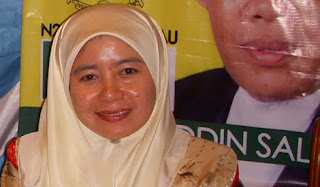 Netto's Malaysiakini article was Selangor MB's pol sec Faekah at bay in which he did the unbelievable again, writing about the MB, Khalid Ibrahim, as follows:

However, he has been slow to recognise as the PKR leader of a state regarded as a jewel in the federal crown that politics is also about providing opportunities, rewarding loyalties and managing expectations of the party faithful.

“… politics is also about providing opportunities, rewarding loyalties ..... of the party faithful”?

“… he has courted trouble with sections of the party - mainly ex-Umno members - ..... ravening for whatever rewards were to be had …”?

My god, what are you saying, my dear Terence?

As if that was not bad enough, Netto then went on to criticise Khalid’s political secretary, Faekah Husin, the target of PKR’s inner coterie, for not cultivating those in the party who would be crucial to the fulfilment of her (alleged) political ambitions.

Now, would I be correct in saying that, according to Netto, Sweetie doesn’t given a rat ass f**k about, to use a Penang term, cheet hor ch’ooi (wiping the Tiger’s mouth with fat, meaning 'greasing people's palms'). 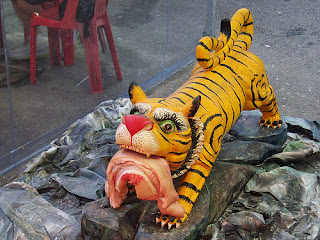 If my assumption is correct, then kudos to this clean and incorruptible sweetheart.

I won’t steal Nat Tan’s thunder for his chiding of Terence Netto, so do peruse his letter to MKINI titled Netto berates Faekah - for doing the right thing?

On second thoughts, maybe just a wakakaka.
Posted by KTemoc at 8:12 pm