The Malaysian Insider - Nazri tells why pandas will be placed in Putrajaya. 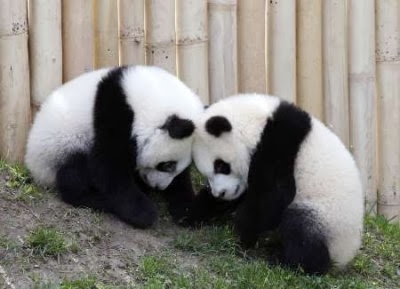 We appreciate the panda bears because they symbolise the close relationship between Malaysia and China.

That many would poke delirious fun at Najib’s invitation to name the giant pandas is an indication of the acute aggravated acrimony existing in Malaysian politics.

No matter how innocuous or trivial a subject that such an invitation is about, so long as it’s from the ‘other side of the political fence’, that invitation would be whacked kau kau. And why should we be surprised when a senior PKR leader set a mean and lamentable example by showing his gleeful rapture in bringing about an early termination in the tenure of Rosmah Mansor as Chancellor of UNISEL, a mere honorary post of non-political significance. Such a political pygmy.

But both sides of politics, with some exceptions in Karpal Singh, Lim Kit Siang, Zaid Ibrahim, Dr Jeya, Nizar Jamaluddin, etc, have been equally guilty in being mean rather than meaningful. Looks like we won't be ready for two-party politics for a bloody long long long time.

Some accuse Najib of American presidential style pomposity when he previously invited the Malaysian public to name his household cat as if they would be interested in the way Americans are in the personal bit and pieces of the First Family, including the breed and name of the presidential dog.

Then there was that ‘First Lady of Malaysia’ (FLOM) title which riled many Malaysians. Maybe Najib should sack his American-Israeli PR firm/advisors. 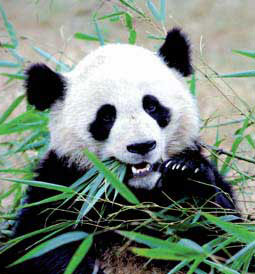 Nonetheless, Minister Ng Yen Yen acclaimed the giant pandas* would pull in tourists especially from Singapore and Indonesia (virtually ignoring more friendly Thailand), while the DPM went on virtually an orgasmic exultation of Chinese investments and Sino-Malaysian cooperation in the fields of telecommunications, transportation, construction and steel manufacturing under the country's Economic Transformation Programme, and for Malaysia to sell halal products to the 25 million.

Lately, he has back-pedalled on his 'no more independent' Chinese schools, wakakaka.

* and we should refer to these black & white animals as giant pandas or panda bears (Ailuropoda melanoleuca, or black and white cat-foot), because the word panda as used in encyclopaedias refers to another unrelated creature, usually known as the red panda (Ailurus fulgens, or shining-cat) which looks like a Malaysian musang or an American racoon but is not related to them

No doubt the Education Minister would soon follow Yen Yen’s example and enthuse about the likelihood of educational standards improving because our students will then be able to distinguish black from white without a BTN-indoctrinated teacher telling them which is what, wakakaka.

And with Ng Yen Yen also revealing that the female panda to be on loan is already fertile I wouldn't be in the least shocked if the Health Minister will sycophantically attribute her pregnancy to ‘our beloved PM’ (now now, don’t be naughty, I didn't imply in any way what you’re wildly imagining wakakaka). 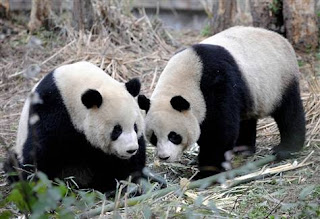 Because China provided these giant pandas (on loan for 10 years) to some foreign countries, these offers have become known as China’s panda diplomacy, where the names of these pandas could even and have been proven to be politically sensitive.

For example, when China first offered Taiwan a breeding pair in 2005 with the names of tuan tuan (not ke-tuan-an Melayu wakakaka) and yuan yuan, the previous DPP government of Chen Shui-bian (who's incidentally now in jailed for corruption not related to the giant pandas wakakaka) opposed the offer because the Chinese words tuan yuan meant ‘reunion’. Chen was virulently anti-reunion with Mainland China.

So his government sabo the importation kau kau by refusing to issue the permits for the entry of the giant pandas into Taiwan, on the bullsh*t that the local zoos did not meet facility and resource requirements for the proper care and rearing of the animals. 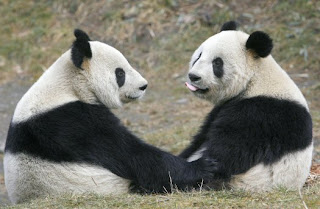 But subsequently the more diplomatic and less confrontational Kuomintang Party came into power in 2008 and accepted tuan tuan and yuan yuan.

But to understand why the giant pandas are coming, and why Najib had requested for them from Chinese Premier Wen Jiabao during his visit to Nanning in April, we need to go back some 43 years, to that dreadful day, 13 May 1969.

Virtually all of us know what happened on that evening, and the subsequent existence of a humongous division between Malay and Chinese Malaysians. Then after June (or was it July) that same year, the Indians were equally traumatized after a mini May 13 in Setapak.

My Uncle who lived through the riots told me a semi-tragic semi-humorous story. When May 13 occurred, one of his Indian friends lambasted him with an indignant and very nasty “You Chinese are troublemakers!” But after the Setapak incident less than two months after May 13, that same friend told him in the same outraged voice “Those Malays are troublemakers!”

My Uncle grinned as he told me he truly struggled to resist taunting that Indian friend with a sarcastic riposte that “No, it’s you Indians who are the real troublemakers”, mind you, just to tease him for his reckless accusations.

Anyway, immediately after May 13, the Chinese harboured hurt, angry and irreconcilable emotions, sometimes expressed openly but often subtly. Chinese boycotted their favourite foodstuff like durians, satay, nasi lemak, nasi Padang, petai, ulam, etc (I would have starved had I been party to the boycott), and warned their community (the women) from wearing sarung kebaya which pissed off my mum and her friend because they wore only Straits (nyonya-type) sarung kebaya when going out, even to the local market, and always sarung at home. 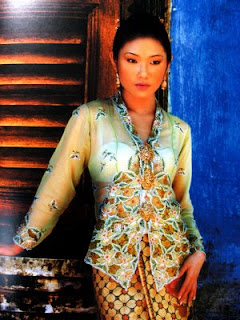 I heard from my uncles that many Chinese trading middlemen stopped giving out informal loans (cash advances) to their mateys, the Malay farmers, fishermen, etc, while some Chinese transport operators also missed out services to Malay kampongs and the rural areas (not sure whether they were just afraid to go into the Heartland or boycotting the Malays).

When Parliament resumed sittings in 1971 and PM Razak brilliantly created the Barisan Nasional (BN) to minimize politicking (with only DAP wisely refusing to join) but which became an alliance that eventually enervated Gerakan and PPP to what they have sadly become today, and effectively made UMNO irrefutably the numero uno bar none in that coalition.

The PM knew he had to reckon with the coming general election in 1974 as he saw the principal problem, the likely lack of Chinese support for BN, one which his son as PM would face 38 years later.

Razak wanted the Chinese to once again support his government as they had Tunku’s Perikatan (Alliance) until 10 May 1969. But how, after the socio-ethnic devastation of 13 May 1969, with Chinese Malaysians coming out all battered, shattered, and ill-tempered? 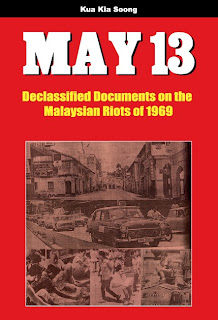 ‘Twas not so much the pogrom per se against the Chinese (though there was that too) because overseas Chinese all over the world have had pogroms against them from time to time.

The Chinese were totally pissed off with the stories circulating among their community, one what they believed (regardless of whether true or otherwise), of the government's deliberate withdrawal of the ‘neutral’ Sarawak Rangers and Federation Armoured Car Regiment from their support of the Police in riot control in KL, and their replacement with Royal Malay Regiment soldiers.
Pogrom is a word of Yiddish-Russian origin, a vocabularied development testifying to the regular persecution of the Jews in Europe (particularly in Russia, Poland, Germany, etc).

Likewise the overseas Chinese, also a race unfortunately and frequently bashed around by the majority ethnic groups in various countries, have such a tragic word to describe the regular anti-Chinese pogroms. That word is p’ai-hua meaning ‘The Driven Out’.

Incidentally, now that we have mentioned p'ai hua, 'someone' (wakakaka) who was once in UMNO, wakakaka again, was very vocal in telling his Heartland crowd that the Chinese could bloody balik Tiong Sun (go back to China).

Anyway, back to the story - once again, Razak struck brilliantly. After analyzing what he believed would show Chinese Malaysians he wasn't anti Chinese per se, in 1974, just prior to the general elections, he did the unprecedented (at least in SE Asia without waiting for Taikoh Indonesia) by establishing diplomatic relations with Communist China.

His BN party ensured that the photo of him shaking hands with Mao Zedong was prominently and repetitively shown up to the general elections. 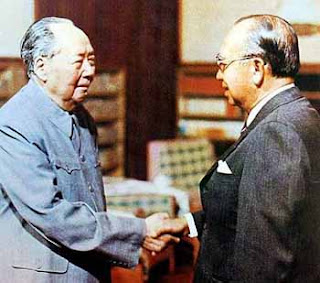 38 years later, his son as PM faces the same problem of a disenchanted if not hostile Chinese community in Malaysia. Even if Mao Zedong was still alive for a few photo ops with Najib, today’s Chinese Malaysians wouldn't really be interested in that Chinese leader, nor would they be in Hu Jintao.


Kaytee was rather keen to propose Gong Li wakakaka, but alas, she has gone from China to (initially) being a Singaporean wife to now becoming, as widely reported, John Cusack’s girlfriend, so her connections with China has become somewhat tenuous. And Zhang Ziyi, as the ex girlfriend of an American Jew, will be too hot a potato for UMNO or for that matter, PKR, wakakaka.

Anyway, our cat loving PM must have decided that a modern day equivalent of Mao Zedong would be the lovable cute giant pandas, everyone’s favorite animal. By emulating his dad’s clever pre-election campaign gimmickry, in using a Chinese icon (Mao updated to or reincarnated as Po the Kungfu Panda wakakaka) to win back Chinese voters, he hopes to repeat his father’s 1974 election success.


And I've heard that more than 60 federal seats in Peninsula have significant Chinese voters which could decide the election outcomes in those constituencies, and which are and will be threatened by PAS and the UMNO … oops sorry wakakaka … Malay section of PKR.

And just in case Chinese Malaysians are too dumb to take up his hints, wakakaka, Bernama informs us that there is currently a Malaysia-China People's Friendship Photo Exhibition (12 to 30 June) at … guess …. wakakaka … yesirree … Wisma MCA, Seri Pacific Hotel, UKM and Sin Chew Daily, where among the exhibits, the famous Razak’s 1974 election campaign photo would be shown, of Najib’s father shaking hands with Mao and Chou, ... 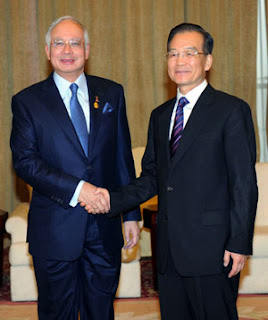 But I'm sure Najib doesn't want the following photo wakakaka. 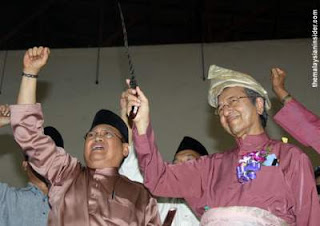