As GE-13 approaches, guess which UMNO person is the most worried man on earth, or at least has shown stress through all too frequent public statements?


No, it's not Najib, nor Zahid Hamidi, nor KJ, nor Muhyiddin, nor Hishamuddin, where perhaps the last two are far too thick to know their fate, thus may not worry at all wakakaka, though I heard Hisham has been advised to move from his current federal constituency of Sembrong where 40% of the voters are Chinese.

Politically accident-prone, the Home Minister has a natural talent in offending the Chinese and Indians, so even thick-skull him would have realized by now that the Chinese and Indians won't be too fond of him. And he has correctly assessed, no, more probably advised (as he is far too stupid to think for himself), that he'll be stuffed in Sembrong in the next general election - for more, read The Malaysian Insider’s (TMI)'s In Johor, Chinese set to snub BN in polls.

The most worried UMNO person is Dr Mahathir who has in the last few days become more and more strident, making TMI headlines in a fashion not unlike the repetitive shouting of a Star newspaper boy selling early morning editions in market places or road junctions (like kaytee did aeons ago in good olde Penang, wakakaka). 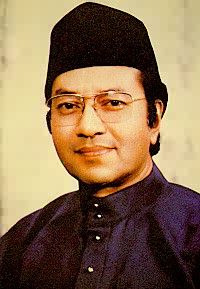 The following have been credited to him:

And we should ask him why after 52 years of Independence, our every day lives, thoughts and especially politics have been about race, bearing in mind he was PM during a hefty half of those 52 years. We should also ask him what have been his contributions towards such a race-conscious Malaysian society.

As I posted in Ah Jib Gor and the Casuarina Tree 3 weeks ago, Chinese Malaysians have found themselves in an undesired political situation where they could possibly play the role of ‘king makers’ in the next general election.

Most Chinese Malaysians (with exceptions of some younger ones) prefer to stay out of the spotlight, not so much to carma (cari makan – they leave that to MCA and Gerakan politicians wakakaka) but to seek an independent and unimpeded living with the minimum of government interference.

The Chinese would probably appeal:

“Leave us alone to conduct our business and seek high quality education for our children – just do not impose more and more barriers, impediments and unjust quotas to restrict our business practice and educational pursuit.”
But alas, every political party, especially PAS, UMNO and PKR are hopefully investing in the Chinese political blue chips because their voting power (despite the gerrymandering and their only 30-ish% presence in most mixed constituencies) will be quite significant and perhaps even crucial in 60 to 70 federal constituencies, making them into The Reluctant Ones, who will be deeply hated by the losing side wakakaka.

Probably the only party which doesn't give two sh*ts about Chinese support is HRP because they know they won't get it, wakakaka. These HRP guys dream of whacking Dr Jeya in Sungai Siput and Dr Rama in Batu Kawan, reminding me of the Indian story of the 3 baskets of crabs wakakaka.

But poor Dr Mahathir is not only worried about the coming voting landscape but deeply resents it. If there is one thing that deeply offends and annoys Dr Mahathir, it's the thought of Chinese being in a superior position to Malays in any field or in a situation where they (the Chinese) can affect the political outcome for Malays, particularly UMNO.

After years of observation of him, his statements, actions, etc, I suspect he just can't stand the very picture of, say, more Chinese millionaires than Malay ones, more Chinese doctors, engineers, dentists, graduates, you-name-it than Malay equivalents, so on so forth.

I'm not so sure whether one could call him a racist, when we consider his feelings (if we step into his shoes) have been that Malays, being the majority in their own country called Persekutuan Tanah Melayu, should rightfully (in terms of numbers and heritage) be the majority in each and every Malaysian sectors of ownership or profession.

Thus if there are 3 Chinese millionaires (and he is not against them per se), then there must be 6 to 7 Malay millionaires, and with that attitude or belief carried as a grievance on his shoulders like two humongous chips, he had thus set his policies when he was PM. I believe he is still very emotionally governed by this belief.

Mind, he is not so concerned about the ethnic percentages in the civil service, police, armed forces and several hallowed departments.

Yet, king makers or not, Dr Mahathir had on a number of occasions admitted it was Chinese support which got him over the line in 1999, though he has now somehow twisted this admittance by asserting that the 1999 support, where Lim Kit Siang and Karpal Singh lost their seats, was because the Chinese, in not voting for their own people (like Karpal Singh, yes, Bhai's real name is Kar Pah Sing) had believed they would benefit in doing so, that was, abandoning their own people like dear old Bhai.

Bloody avaricious Chinese, unlike those who didn't vote UMNO in 1999 and 2008, wakakaka.

Mind you, all this while I had thought the 1999 Chinese abandonment of DAP was due to bloody stupid arrogant PAS who frightened the shit out of them, and which in turn resulted in DAP copping it sweet because of the latter's association with the blood-red Moon through the stupid Barisan Alternatif of 1999.

Today he decided to ratchet up the insult against the Chinese (and Indians) real kau kau, in his by-now standard statements of sheer denial where he put the blame for his faults on the Chinese and Indians, such as Chinese and Indians still talking about themselves, their rights and their privileges, and not just about Bumiputeras.

Then he preposterously claimed that the UMNO government has found that Malaysians are still segregated and that they tried to do something about it but there are objections, presumably from Chinese and Indians.


I'm just amazed by Dr Mahathir's 'creative' memories, his version of history (especially about the period of his 25 years as PM), and his twisted logic.


Chinese and Indians are still talking about their rights and privileges is because they have very few and certainly very much less than even some recent 'new' Malaysians who obtained citizenship just after a couple of weeks residency here.

And then, did it help when DPM Muhyiddin talked about him being a Malay first and a Malaysian only second, a publicly affirmation supported by UMNO's mouthpieces including leading journalists-editors like Kadir Jasin who told us pointedly why he wish to remain a Malay.


Wakakaka, kaytee responded to Pak Kadir why unlike him I wish to remain a Malaysian. I don't suppose Dr Mahathir would want to mention this, a Chinese wishing to be recognized as a Malaysian rather than a Chinese, assuming for one second he was even aware of my letter in CPI to Pak Kadir.


And the greatest insult is that after umpteen generations here, with many Chinese and Indians serving in the Police and Armed Forces, where a number were awarded the SP and PGB, they and their children are still considered less patriotic than The Chosen Ones or even The 'New' Malaysians, and to Dr Mahathir, it's a PRIVILEGE for these non-Malays to retain their racial identities - and just who do think forced those non-Malays into their respective psychological ethnic ghetto?


He has of course conveniently failed to mention the regular insults against non-Malays by his BTN-ized civil servants and teachers who would constantly, with the help of specially written books, remind many of us we are children of dogs or prostitutes rather than Malaysians, and even perpetuations of violence by the UMNO police and UMNO MACC.


As I said, sadly Dr Mahathir has in recent times acquired an amazingly twisted and selective memory because he has obviously forgotten that it was his administration which forced Chinese and Indians to remind themselves that they are Chinese and Indians in their kad pengenalan, borang-borang kerajaan Malaysian, and in their limited quota into universities and non-admittance into UiTM, etc.


It was also Dr Mahathir who stated recently that it is still premature for Malaysians to assume a non-ethnic identity like Bangsa Malaysia.


And now he conveniently makes the victims of his socio-political-educational-economic divisions of Malaysians the culprits and perpetrators of his policies.

(4) Be careful of your actions, Dr M warns daughter

In the end he revealed his hands, why he has been so stressed and strident, when he publicly slapped the wrist of Marina Mahathir, albeit a very light tap only but nonetheless an amazing unprecedented chiding of his daughter in public.


He warns Marina to steer clear of Bersih because her associations with the NGO, especially its sweet leader, Ambiga Sreenevasan, who has been repetitively threatened, reviled, cursed, mooned and recently 'hung' by UMNO warriors, would hurt the political prospective of his son, Mukhriz - for more see also Dr M backs Mukhriz as next Kedah MB and my January post Next MB of Kedah. 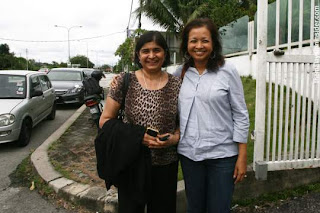 So in the end, we discover that Dr Mahathir's relentless campaign particularly against the Chinese has been for dear Mukhriz, but in that, we have to read too that, despite our perception of him as an iconic force in UMNO, his powers have much waned, even in his once fortress of Kedah. 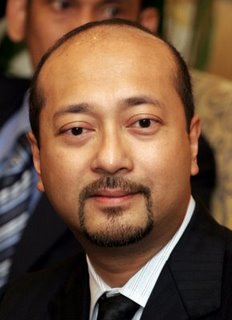 Where once he could, with a snap of his fingers, ensure Mukhriz's position as that State's next MB, he now realizes he has to work hard, very hard (and the best way would be the usual generous dosage of UMNO-style tongue lashing against the 'greedy arrogant and aggressive' Chinese), to give his son the image of a Heartland guardian and thus a fighting chance, not just against the political opposition but also against the internal opposition within UMNO.

Perhaps in this, the Chinese are indeed king makers, though a perverted surrogate form used by him for a wee bit of bashing as part of his campaign to make his son the next political king of Kedah.
Posted by KTemoc at 12:20 am