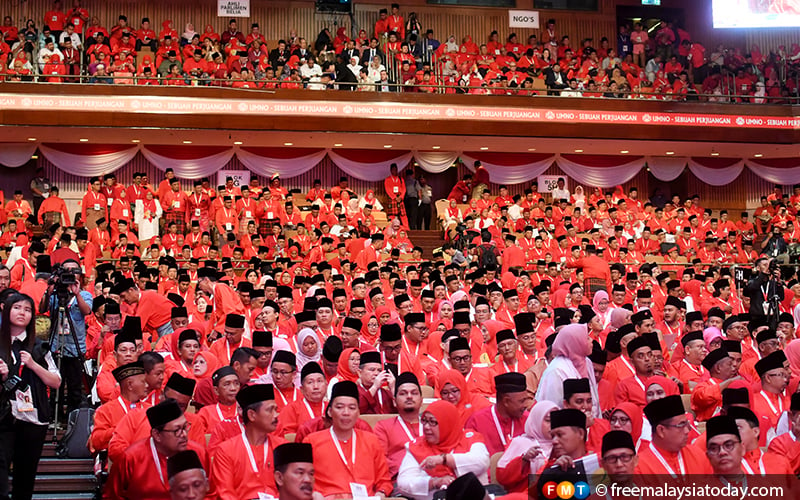 The Umno election at the next general assembly is the best platform for the grassroots to pick the leaders they want and reject the ‘enemies within’.

PETALING JAYA: An Umno insider says the party’s biggest problem is its leadership but removing president Ahmad Zahid Hamidi is not the “silver bullet” it needs.

Speaking to FMT, the Umno leader, who declined to be named, said this was obvious to its leaders and grassroots.

There have been increasing calls for Zahid to resign as president, and while the insider says Umno will benefit from being led by someone who is not facing trial, the party’s top leaders are still very much in the picture.

“It is nothing personal against the current leadership, but some perceptions, true or otherwise, just can’t be changed no matter what we do.”

He said, however, that the biggest “change” in Umno after the 14th general election (GE14) could end up being the “cure” to its leadership problem in the coming party election.

“Unlike before, our grassroots have become more vocal in what they want to see from the central leadership. This is evidenced by the recent call by the majority of the divisions to end ties with PPBM.

“We are slowly but surely becoming the Umno that our founders envisioned, a party that belongs to the grassroots and not the leadership alone,” he said.

The leader added that he believed the outcome of the coming Umno election would better reflect what the grassroots wanted to see, a leadership that was clear on the way forward, particularly for the next general election.

He said although Umno’s traditional voters were returning to the fold, this might also be down to the frustrations with Pakatan Harapan and the Perikatan Nasional government.

He believes it is now important for Umno to really listen to the grassroots and the rakyat on what they expect from Umno.

“What we want is immaterial. In the end, we are servants of the people. It is they who matter the most. It is they who decide whether we win or become the dominant party in the next election.”

“He (Najib) could still be a factor for the party’s future direction with his experience in both governance and party leadership. It would be a waste if the party dismisses him.

“His ability to raise the people’s concerns within and outside Umno has made him very popular and he is effective against our opponents.”

He said the grassroots would likely reject those seen as “enemies within”.

“It is clear that calls for Zahid to resign won’t work nor will it solve Umno’s problems. It will only lead to a belief that there is a conspiracy to weaken Umno from the outside when the issues are internal.

“The Umno election is the best platform for the grassroots to pick the leaders whom they want to fight their battles, the bread and butter issues, not those who are only interested in power and position.”
Posted by KTemoc at 4:14 pm