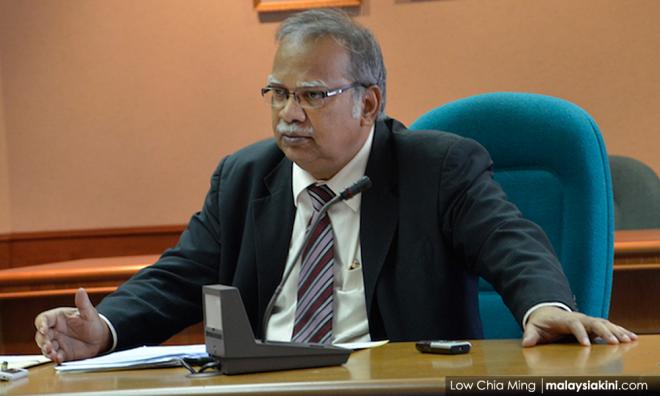 The Thaipusam chariot procession in Penang early this morning did not have approval from the state government or the National Security Council, said Deputy Chief Minister II P Ramasamy.

He also claimed that the Chettiar temple was emboldened to carry out the procession due to "federal intervention" by Human Resources Minister M Saravanan.

Penang had previously called off Thaipusam festivities in light of the Covid-19 pandemic, urging devotees to pray at home instead.

However, Ramasamy said the Nattukotai Chettiar Temple filed an appeal to hold a chariot procession after a similar one was approved for the Batu Caves temple.

Ramasamy said the state government had not even discussed the temple's appeal when they sought Saravanan's intervention.

"I understand that the Chettiar temple emboldened by the intervention of Saravanan had put out their silver chariot for a limited run under the SOP.

"To date, the state government and the NSC have not given permission for the chariot procession in Penang.

"I understand that what Chettiar temple is doing now is unacceptable," he said in a statement, adding that action should be taken against them for defying directives from the state government or the NSC. When contacted, the human resources minister said he would call and explain the matter to the Penang deputy chief minister.

Malaysiakini has also contacted the Chettiar temple committee and the NSC for comment.

The Chettiar temple procession from the Kovil Veedu at Penang Street to the Waterfall Temple at Jalan Kebun Bunga took place in the wee hours of the morning under police supervision.

FMT reported that only 10 people accompanied the chariot, in addition to a priest who sat next to the statue of Lord Murugan.
*********
kt notes:
When asked, Minister Saravanan said he would call the Penang DCM and explain the matter, meaning Saravanan is on the defensive, wakakaka.
It's suspected that the Kedah MB's disrespectful abuse of the Indians in the northern state might have influenced the federal MIC to lobby for such silly (amidst the pandemic) Hindu actions in KL and to allow the Chettiar in Penang to proceed on a mini-Thaipusam procession, just to show its defiance and Hindu pride amongst Indian voters. However, Dr Ramasamy reiterated that the NSC did NOT give permission for the Penang (quiet) procession.
What the Nattukotai Chettiar Temple did during a pandemic was of course wrong, and which may explain in general why the pandemic is getting worse. This is not to say the Chettiar Temple's defiant action causes the worsening of the pandemic per se but that their indiscipline and defiance against official instructions demonstrated a sad reflection of some Malaysian tidak-apathy attitude towards the dangers of spreading the pandemic and amplified a bad example.
Additionally, there already exist disagreements between the local Hindu Endowment Board (headed by Dr Ramasamy) and the Nattukotai Chettiar Temple which has been said to owe its loyalty to its Tamilnadu origin rather than to Penang.
Section 4 of the Hindu Endowment Act gave the Penang Hindu Endowment Board (PHEB) the right to discuss matters pertaining to Hindu temples in Penang, and thus the kind of punishment it can/will mete out to the Nattukottai Chettiar Temple for the defiant procession.
Posted by KTemoc at 10:04 pm