Why some rulers dislike the PM

Several rulers had campaigned against Dr Mahathir Mohamad to prevent him from becoming prime minister again, veteran newsman A Kadir Jasin has claimed.

“It is common knowledge that several sultans were explicitly and implicitly campaigning to stop Mahathir from returning to the political arena. [...]

Although Kadir did not mention details, the former group editor-in-chief of the New Straits Times Press noted that the Kelantan palace had stripped Mahathir of his Darjah Kerabat Al-Yunusi (DK) title three months before the election.

“Revoking the title is seen as a rejection of Mahathir by the Kelantan palace,” he said.

The present Agong is also the Sultan of Kelantan.

At a recent event with Malaysians in Jakarta, Wan Azizah (photo) said she had turned down the post of prime minister to honour Harapan's promise to voters that Mahathir would be number one and she, number two.

There is some truth in what Pak Kadir said, in fact quite a fair bit, as there have been bad blood between Mahathir and some of the royal houses.

We know all too well about Maddy's bad relationship with the House of Johor which started with a hockey story, wakakaka, and the late Sultan of Johor, Sultan Iskandar.

Of course Maddy used that occasion to exploit what he wanted in the first place, to alter the federal Constitution to bypass the Agong on Bills. And the Royal House of Johor has never quite forgiven him.

Mind you, the rakyat was happy to go along with Maddy because they were getting fed up with the "absolute ruling" behaviour of a couple of royals.

Then he had a tiff with the Royal House of Selangor by insulting the ruler indirectly. Then he was letting go at Najib the Bugis but as Chinese would say, slashing the entire Bugis ground with one long bamboo pole (not exact translation from Chinese but serves its meaning understandable in English) and hitting another Bugis, to wit, HRH of Selangor, wakakaka. 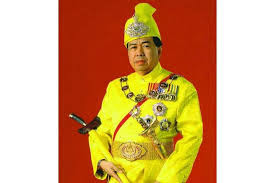 Then thirdly, there's also the Royal House of Kelantan.

The quarrel between Mahathir and the first two Royal Houses are quite well-known, so let's read the following Star Online article on the 3rd:

AMANAH’S recruitment of an uncle of Yang di-Pertuan Agong Sultan Muhammad V is believed to be the trigger element behind the sudden revocation of the Datukships of two top Amanah leaders from Kelantan.

Amanah leaders had allegedly taken Tengku Muhammad Petra on their ceramah rounds after he joined the party in September 2016.

During one ceramah, Amanah vice-president Husam Musa, one of those whose Datukship was revoked, had introduced Tengku Muhammad as “bapa saudara Yang di-Pertuan Agong” or the uncle of the King.

This had apparently angered the Kelantan palace, which perceived it as a move to ride on the palace’s name and prestige.

However, Kelantan Amanah chairman Wan Abdul Rahim Wan Abdullah denied that his party had tried to capitalise on the royal connection.

He claimed that Tengku Muham­mad, who is in his 50s, appeared only twice on the Amanah stage last year – once in Pasir Mas alongside Amanah president Mohamed Sabu and another time in Rantau Panjang with Husam.

“After that, we realised that we cannot take the opportunity to push him forward.

“It is good enough that he is our member. We did not capitalise on his royal status or bring him around,” said Wan Abdul Rahim, who was also stripped of his Datukship.

Wan Abdul Rahim, a former MP and assemblyman, said he had also invited Tengku Muhammad to speak at a ceramah near Ketereh, but the latter did not show up.

He denied recruiting the royal figure and said Tengku Muhammad was invited to join by one of his own friends.

“I was there at a small gathering at his friend’s house when he announced that he was joining us,” said Wan Abdul Rahim.

A Kelantan insider suggested that the palace action was a warning to Amanah leaders not to exploit or use royal personalities in their politics.

According to the insider, the royal discomfit also has to do with the fact that Tengku Muhammad was allegedly linked to a political plot in the early 1990s to undermine the Kelantan throne, which was then held by the King’s father, Sultan Ismail.

The plot, which made headline news for months, involved backing Tengku Ibrahim Petra to claim the Kelantan throne.

Tengku Ibrahim Petra, now in his 60s, is another uncle of the Yang di-Pertuan Agong and comes from an accomplished family – his father Tengku Indra Petra was a former MP and ambassador to Japan.

Tengku Muhammad, who used to be an educator, was known to have supported the plot.

But the mastermind behind the plot was perceived to be none other than Tun Dr Mahathir Mohamad, who was then prime minister.

As such, the alarm bells in the palace went off after Dr Mahathir was named Pakatan Harapan’s prime minister nominee.

Suddenly, all those old, familiar memories came flooding back.

It may explain why the palace has also moved to strip Dr Mahathir of his Darjah Kerabat Al-Yunusi (DK) award.

The plot to put Tengku Ibrahim Petra on the Kelantan throne was sparked off by the then stand-off between Dr Mahathir and the Malay Rulers, who were up in arms against the then prime minister’s bid to amend the Constitution to curb their powers.

The then Sultan of Kelantan was an adamant opponent of Dr Maha­thir’s move and the state was punished over issues pertaining to oil royalty, allocations for water treatment as well as the relocation of the gas refinery plant to Songkhla, Thailand, instead of Kelantan.

Kelantan had just fallen to PAS in 1990 and the stage was ripe for a battle royale between the then prime minister and the Kelantan royalty/PAS government.

The Federal Government pulled everything out of the hat to embarrass the Kelantan palace and government.
The situation was so dire at one point that the Proton Saga was barred from entering the palace gates.

Rightly or wrongly, Dr Mahathir was seen to be the brains behind the plot against the Kelantan palace.

It was like a Malay movie and the joke then was that Dr Mahathir was the producer, Tan Sri Annuar Musa – then the Kelantan Umno chief – was the director and Tengku Ibrahim Petra the action hero.

The Kelantan crisis coloured Dr Mahathir’s reputation among an entire generation of Kelantanese who felt that he used the instruments of state to punish them, their Sultan and their state government.

The Kelantan royals have not quite forgiven Dr Mahathir or Annuar for what is known as the “black spot” in the state’s history.

They are still deeply suspicious of Dr Mahathir, especially now that he is claiming that Pakatan will form the next government and he will be the prime minister.

Dr Mahathir took away a chunk of the powers of the Malay Rulers.

It is likely they do not relish the idea of another round of Dr Mahathir and what he could do to them if he becomes prime minister again.
Posted by KTemoc at 5:08 pm