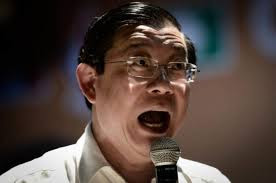 
He threatened to take stern action against those who do.

In a fiery speech, Lim said these DAP representatives should not challenge the party or leadership.

“Some people think that if they become a state Exco member, they can become a Datuk; they feel it’s their right. That is not right.

“Don’t mess with me. Regardless of your position, I will take action. You were elected to represent the rakyat, not yourself,” he said when officiating the 2018 KL DAP convention. [...]

Lim’s warning comes a week after Berita Harian reported him as describing Melaka DAP chief Tey Kok Kiew as being “stubborn” for failing to apologise over his acceptance of a “datukship”.

According to the Malay daily, Lim said two other leaders who accepted their titles had apologised for not consulting the party first, namely Bemban assemblyperson Wong Fort Pin and Sandakan MP Stephen Wong.

While it may be the DAP Party's policy not to accept royal (or state) awards of 'Datukship' while in active service, and no outsider should interfere with such a policy, yelling out such a policy publicly in a threatening arrogant way is not advisable in monarchic Malaysia.

Because Guan Eng voiced his disfavour to title-awards so publicly, it may inadvertently misrepresent a 'quasi-republican' DAP who spurns royal titles with apparent disdain, thus misbehaving in what may be seen as a disrespectful biadab-ish manner to the Malay royals.

The DAP has for years strive to represent the Malays but how would such an impression, misrepresented as it is by Guan Eng's bloody big fat heavy jackboots stomping all over his party members, appeal to the Heartland.

Guan Eng could have done it in an internal party memo, circulated amongst DAP members. Even if that leaks out, the Malays would have been more appreciative of a DAP which is respectful to Malay royalty and Malay sensitivities.

Guan Eng might want to flex his party muscles to DAP members a la you-tahu-kah-LIMPEH-siapa but alas, at what cost to its external image, especially to Malays.

Once someone said Guan Eng is not the brightest bulb on a chandelier, and I can see why.