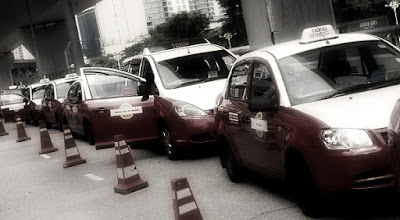 It is understandable that these taxi drivers would get frustrated now that Mahathir has been elected their MP and even PM but has failed to meet their expectations.

You may argue that the taxi drivers only have themselves to blame for the poor service quality.

I do agree that our taxi service is of a quality way below that of Singapore, Taiwan or even Thailand. The issue is not their service quality per se but their relatively better systems.

The utterly rotten taxi service in Malaysia can be attributed to our rotten system, and this rotten system is closely related to Mahathir himself.

When Mahathir was the prime minister in the 90s, the country's taxi operation was monopolized by a small group of privileged companies, and only those with special connection can get a taxi permit.

Those who want to drive a taxi would have to apply with these taxi companies which would leased their vehicles to the drivers.

A big chunk of these drivers day-to-day earnings went to the taxi companies, leaving them with not much after paying for fuel and maintenance.

And these so-called "taxi companies" never performed their obligations of training the drivers and improving their service attitude, nor providing them an efficient vehicle hailing system.

Because of such a repressive system, many drivers could hardly make ends meet. In the end, they had no choice but to tax their passengers.

When every finger is pointed at taxi drivers, does anyone ever think who created all this mess, or who issued the taxi permits and allowed the establishment of "taxi companies"?

Were the taxi drivers going too far by asking Mahathir's help?

In this whole thing, taxi drivers are the oppressed lot, and consumers the eventual victims.告
Posted by KTemoc at 9:28 am