Massacre at Charlie Hebdo - who is guilty? 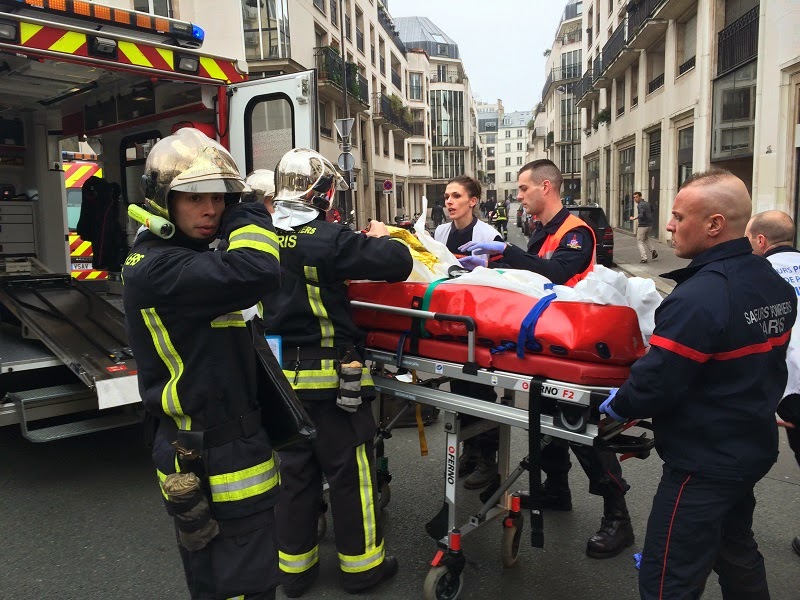 I join the condemnation against such violence which doesn't prove nor achieve anything but where innocent people instead are killed.

But let's not just leave it there - we need to put the total picture in perspective where we need to also condemn Charlie Hebdo for its unnecessary provocations against Muslims.

The (then) French Foreign Minister was damn angry with the earlier provocation of Charlie Hebdo in publishing the Prophet Mohamad caricatures, where he stated "In France, there is a principle of freedom of expression, which should not be undermined. In the present context, given this absurd video that has been aired, strong emotions have been awakened in many Muslim countries. Is it really sensible or intelligent to pour oil on the fire?"

What was Charlie Hebdo's excuse or if we want to be kind to it, reason for re-publishing (not first to publish as the Norwegians did it first followed by the Danes) something which had already inflamed Muslims all over the world?

As TMI reported: Despite being taken to court under anti-racism laws, the weekly continued to publish controversial cartoons of the Muslim prophet.

In September 2012, Charlie Hebdo published cartoons of a naked prophet as violent protests were taking place in several countries over a low-budget film, titled "Innocence of Muslims", which was made in the United States and had insulted the prophet.

French schools, consulates and cultural centres in 20 Muslim countries were briefly closed along with embassies for fear of retaliatory attacks at the time.

Why was it so adamant about being provocative against Muslims?

Charlie Hebdo's director, Stephane Charbonnier, pompously claimed that his magazine was not really fuelling the (angry Muslim) fire but rather using its 'freedom of expression' to comment on the news in a satirical way.

Its editor responded to the French ministerial rebuke: "We do caricatures of everyone, and above all every week, and when we do it with the Prophet, it's called provocation."

Oh, that thick-skinned double standard hypocritical claim again, again and yet again by those European press.

Okay then, can Stephane Charbonnier or anyone in Charlie Hebdo please explain why it sacked its former cartoonist Siné (real name Maurice Sinet) in 2008 for his cartoon-article on the marriage of Jean Sakorzy, the son of France former president, to Jessica Sebaoun-Darty, a Jewish heiress, after a (obviously) Jewish journalist described Sinet's comments as anti-Semitic. 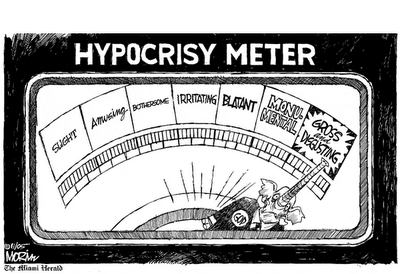 Thus Charlie Hebdo's publishing "sin" was not so much in its claimed pompous right to exercise the European's so-called bull about "freedom of expression" if even in an unnecessary provocative manner, but in its double standard hypocrisy in sacking its former cartoonist Maurice Sinet for a mere seemingly innocuous comment about the wedding, where Sinet said of the young bridegroom: "He'll go a long way in life, this lad!"

Whether Sinet was referring to the heiress' wealth or Jewish heritage was not known but regardless, please tell me, how was it in any way anti-Semitic?

And compare Sinet's remark with the degree of provocation in publishing the Prophet Mohamad caricatures.

"Freedom of expression"? As we Malaysians would say: Pordah!

But more interestingly, we must ask why Charlie Hebdo has persisted in its provocations against Muslims while over pampering to Jewish issues, even when there had been no issue as in the case of Maurice Sinet's comment?

Yes, why? Do read my 2007 post The 'O' in SWOT regarding the 3 'I'-s in the ME particularly in its latter section about Daniel Pipes and Flemming Rose, cultural editor of a Danish newspaper Jyllands-Posten, the bloke who published the Prophet Mohamed caricatures. 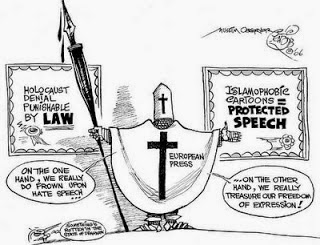 By the by, have you heard of David Irving?

He was jailed by Austria for questioning details about the Holocaust. Read my post European 'Freedom of Expression' took nosedive!