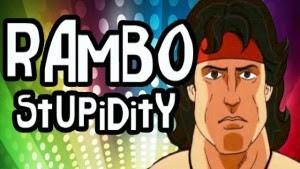 KUALA LUMPUR, Aug 16 — Malaysia should have waged war on Singapore to keep Pulau Batu Puteh instead of bringing the dispute to the International Court of Justice, Utusan Malaysia columnist Ridhuan Tee Abdullah wrote in an editorial today.

In a sharply-worded piece touching on criticisms by Singapore founding father Lee Kuan Yew (picture) in his book “One Man’s View of the World”, Tee said the republic was fortunate he was not the prime minister of Malaysia during the time.

“I certainly would not bring the matter to the International Court of Justice (ICJ). The only resolution to the dispute is war,” he wrote further.

“The world has witnessed the loss of Malay land to the ultra kiasu.

“Today, Malays are humiliated, but ‘we’ remain silent,” he added.

I like that part where the news report said: "Tee said the republic was fortunate he was not the prime minister of Malaysia during the time."

All I need to say is Alhamdulillah for Rambo NOT being the PM or the Defence Minister or anyone significant in Malaysia. We should all be thankful for small mercies.

BTW, if he includes himself as a Malay, then the Malays haven't remained silent, wakakaka.
Posted by KTemoc at 6:23 pm