Zahid Hamidi has earlier said non-Malays were becoming increasingly arrogant, wakakaka and I have to grudgingly admit there is some truth there in-as-much as UMNO-ites have been arrogant for a long long long while. 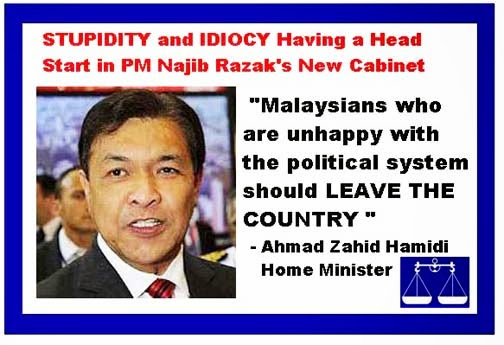 Now in the face of UMNO's non-Malay allies excoriating him for his racist remarks, he has back-pedaled furiously, claiming his remarks on the non-Malays' increasing arrogance were taken out of context, wakakaka.

Zahid seems to be making a habit of operating his big mouth before he engaged his brains. 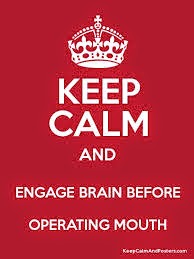 Way back in 1998, Zahid was then UMNO Youth Chief and a very close ally of Manmanlai, where he served as the latter's stalking horse in an UMNO internal power struggle.

Zahid did something rather silly in accusing the UMNO party president, PM Dr Mahathir, of corruption and cronyism in an apparent impatient move by the Mnamanlai faction in UMNO to nudge Dr M out for Brahma's final ascendancy to the PM’s post.

But one without political pubic hair yet should not f**k around with the Grand Olde Man of Malaysian politics. When Dr M turned the table on Manmanlai and gang, giving them a taste of their own medicine (corruption and nepotism accusations) they were stunned by the reversal in fortune - the predators had become the preys, wakakaka.

It led to Manmanlai's expulsion from the wonderful cosy comfy party, which in turn led to Zahid abandoning KD (Kapal Diraja) Pre-Reformasi like a rat would a sinking ship, wakakaka, where he then went super-bodek, knowing which side of the bread was kaya-ed.


Yessir, Zahid Hamidi's superior survival skills wakakaka had him confessing to Daddy that Anwar was the bloke who instructed him to attack Daddy with allegations of cronyism and nepotism.

He finished his confessional with a flamboyant flourish by apologising to Daddy, acknowledging Daddy's rebuke of him was as a father to son, wakakaka - for more read the New Straits Times of 19 June 1999.

Now, wasn't that a case of Zahid operating his big mouth before he had engaged his brains, wakakaka.

Then a dozen years later, on 09 Nov 2010, Zahid stated in response to a question in Parliament that the low number of Chinese and Indian recruits in the military could be due to the Chinese and Indians [being] 'not patriotic enough'.

This talk about patriotism was from a man who couldn't even be loyal to his party president, Dr M, and then in an amazing lightning fast belakang pusing, also showed his disloyalty to his mentor, Anwar Ibrahim. He sure had a nerve talking about patriotism.

When the DAP wanted to question him on his racist assertion about the alleged non-Malays' lack of patriotism, he scooted out of the Dewan Rakyat to evade those questions. DAP’s Kulasegaran called the pseudo-patriot a coward wakakaka.

But true to his habit, Zahid made a half-hearted back-down, trying to spin his way out of his self created bigoted mess in much the same way as he had spun his way back into mainstream UMNO after deserting the Anwar Ibrahim camp.

So, apart from some Chinese and Indian ex-servicemen including a couple of generals blasting him for his stupid statement, Kulasegaran fired several rounds of HE (high explosive) artillery shells at him in the form of a motion in Parliament to deduct a symbolic but very indicting RM10 from Zahid’s pay. That forced Zahid to come out in girlish defence of his 1Malaysia credentials.

Why ‘girlish’? I’ll come to that shortly, wakakaka.

After reversing his earlier comment on non-Malays lacking patriotism, and in a shameless 180 degrees direction into praising the contribution of non-Malays in the armed forces during the emergency period and the Indonesian confrontation who had “given their limbs and lives for this beloved country” (though he failed to mention their contributions on overseas missions), Zahid claimed in a Malaysiakini report the following as proof that he wasn't racist:

"I have many Indian and Chinese friends and voters in my area who are non-Malays. Did you ever have friend in university who are not of your race?

The roar of wakakaka’s from the opposition bench shook the foundations of the already unstable Parliament building. Kula sneeringly commented: "What does that have to do with anything? That does not explain the statement you made as a minister."

I too was overwhelmed by heavy wakakaka-ing at Zahid resorting to a very girlish reply.

Years ago, as I posted in Racist Malaysians, a sweetie blogger by the name of (ironically) Sammy wakakaka (no relation to Aneh Samy but in fact a Chinese sweetie) made a very hurtful comment against Indians. I wrote:

Blogger Sammy, alas a sweetie, of Life is a Drama blog is certainly living up to her motto of ‘A life without a dash of conflict and colour will not be a complete one’, except she chose the theme of colour a wee too literally, and consequentially is now reaping the ugly conflict.

According to Malaysiakini, Sammy went ballistic when two alleged Indian youths snatched her mobile phone left on a table while she was having lunch. She did the silly thing by resorting to cynical stereotyping of Indians in the worst ways, and then made things worse for herself by posting the entire racist raving rant on her blog. […]

After she had ‘woken’ up from her rage she realized the enormity of what she had done and apologized, but when I read her blog this afternoon I thought she could have closed the whole issue (or at least most of it) by making an unreserved apology, instead of qualifying it by stating she apologized to ‘educated’ Indians, whatever that meant.

Much later in another post she admitted being told that her apology had been ‘grudging’. She posted:

I realised this is getting way out of hand. I was also dubbed as 'grudgingly apologised' in my later post. Since text has no tone and emotions, I don't know how to make it sound sincere but I do hope to get this out as sincere as I can. Again, I will apologise and say sorry to those I've offended, Indian or no Indian. I hope this official apology does not sound 'grudgy' again.

I was not racist and was acting out of my anger the last few days. If i've to face the police, then yes I will to explain the whole situation. If i were to hate indians, I would not wear saree on my Indian friend's birthday party because that would be ridiculous.

Sammy’s proof of her non-racist attitude towards Indians was that she wore a saree, not unlike Zahid’s sharing a room with an Indian.

That’s why I said Zahid was ‘girlish’. Pity Zahid didn’t claim he wore a dhoti wakakaka.

But at least Sammy unlike Zahid made a full apology the second time.

But it’s amazing that these people dare expect us to accept their claims of mere superficialities as proof that they aren’t bigots. It certainly reflected on the superficial nature of their characters.

But Zahid won't be Zahid if he didn't open his mouth and then subsequently backtrack, claiming he was misquoted, taken out of context, misunderstood and had his words twisted.