As Malaysians we should be proud of our unique politics. For example, election polling in both the public domain (especially in Sarawak's polling stations in remote areas) and in intra-party affairs (even in urban centres for one particular political party, wakakaka) have the ability to cause power outage, wakakaka again. 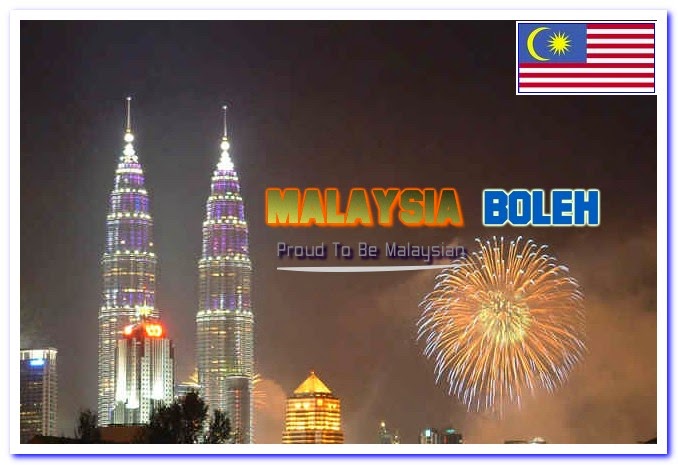 Leaving that and the antics of the remarkable Election Commission aside, do you know that once the Malaysian Chinese Association (MCA) had a Malay as its party president, wakakaka - well, at least temporarily, wakakaka again.

Then, as if the above two cases were not bizarre enough, PAS had a plan to have an UMNO man as PM should Pakatan Rakyat win the 2013 general elections with a ruling majority, wakakaka.

Now, we have a partyless assemblyman in Selangor who declared pompously yet pathetically “I will carry on my duties as mentri besar as usual and have been advised not to make any statements until the royal advisory council meets tomorrow. I will discuss the matter with the Sultan after the meeting.”

See, he's not referred to as the Royal MB for nothing, a man who obviously doesn't understand the democratic process and believes he answers ONLY to HRH.

Until very recently, I have favoured him over you-know-who, wakakaka, even though I personally don't think very highly of him (the former) as a people's representative, observing he's nothing more than a pure businessman who cares more about big corporations and companies' revenues than the ordinary people's problems, as noted so painfully in the Grand Saga toll oppression in Cheras - see my post The Man who would be King.

But since lately he has become insubordinate to his own political party, openly defiant of their instructions and disdainful of consultations with his Pakatan colleagues prior to making big and important decisions. I suspect, as mentioned above, he has some weird ideas he as a State MB answers solely to HRH and not to his party, coalition, exco colleagues or Pakatan's constituencies - note emphases as underlined.

Thus despite my trepidations about you-know-who, wakakaka, coming into greater play with his sacking from PKR, I applaud PKR's firm decision to expel this maverick who lacks understanding of the democratic political process. Such a person is extremely dangerous for the Selangor rakyat to have as their state's chief executive

Let's examine one possible scenario which I blogged on just recently in Helping Khalid Ibrahim stay on as MB Selangor, in which I suggested for Khalid Ibrahim to resign from PKR (too late now, he's sacked) and to apply to join PAS (still okay).

I believe the Islamic party will be only so glad to accept his membership application, as indicated by its Shura Council which has ignored Pakatan consensus to throw its unreserved support behind him in the matter of the MB position. In fact, the Malay Mail Online reported that PAS, strangely in the very person of Mat Sabu, may consider his application.

If PAS accepts his application, then that will definitely spell the end of Pakatan as it stands today, and I hope DAP won't be so undignified or cheap skate as to insist on hanging on to a by-then useless hopeless dysfunctional coalition.

This could possibly spell a new Malay-Muslim Unity Coalition of PAS and UMNO, providing them with 28 ADUNs (or 50% of the House) against what's left of Pakatan or Pakatan Version 2 (PKR + DAP), also 28 ADUNs - basically a 'hung' parliament.

But wait, I believe Hannah Yeoh (DAP) as the Speaker cannot cast her vote unless the House is locked in a split voting outcome, say, in a show of confidence on Khalid Ibrahim as the MB.

This effectively means it has to be 28 votes versus 28 votes before she can cast her Speaker decisive vote. But alas, for the new Pakatan (minus PAS) there won't be any 28 vs 28 votes as long as she as the Speaker cannot cast her ADUN vote, wakakaka, what a Catch-22!

One of my visitors cleverly suggested that in such a situation, Hannah Yeoh resigns from her Speaker's position to qualify to vote against Khalid Ibrahim, in what will probably be a speaker-less DUN, wakakaka - another bizarre case of unique Malaysian politics - plus a 'hung' parliament of 28 versus 28 ADUNs without any Speaker to cast a decisive vote, wakakaka.

And in such an impasse. whichever coalition nominates its member to be Speaker will become the loser, wakakaka.

Okay, assuming Hannah Yeoh doesn't abandon her Speaker's position (and wakakaka, why would she hang on as Speaker?) and the PAS-UMNO coalition wins 28 against Pakatan's 27, Khalid Ibrahim can continue being the MB of Selangor.

On paper, it looks likely that way only if Hannah Yeoh stays on as Speaker (wakakaka), or unless a couple of PAS' Erdogens daringly choose to vote otherwise. OTOH, Khalid may have a couple of PKR ADUNs faithful (wakakaka) who follow him into PAS or at least stay independent and vote pro-PAS (or rather pro-Khalid).

The other alternative is PAS (with its 16 ADUNs) nominates its own PAS man, Iskandar Abdul Samad as MB, with Khalid as deputy MB, wakakaka. Ampun tuanku, I speculate this option might just possibly meet HRH's approval.

But on another bizarre note a la Malaysia Boleh, wakakaka, PAS can of course nominate an UMNO man, say, Mohd Shamsudin Lias, currently the opposition leader in the Selangor DUN to be the new MB.

And why not when PAS could see fit to want Tengku Razaleigh as PM if Pakatan had won GE-13, wakakaka. Besides, Mohd Shamsudin Lias is a man, not like Dr Wan Azizah (or in 2008, Teresa Kok as deputy MB).

OTOH, if PAS looks at the strategic picture, namely GE-14 and after, it will vote together with PKR and DAP in a show of no confidence in Khalid Ibrahim. Does that then mean Dr Wan Azizah will become MB?

Personally I don't have much confidence in Dr Wan Azizah as MB. My assessment is not those of misogynistic PAS who just can't countenance a chabor (woman), any chabor, being the MB (or PM).

I fear Dr Wan, who herself admits she doesn't have experience in administering a state, may become a puppet to you-know-who, of course via God's gift to the people, wakakaka - hey man, messages and instructions can be sent to and from jail (unless he wins his final appeal), wakakaka.

I don't believe there's anyone in PKR suitable enough to be MB.

That leaves us PAS, but alas, with its hudud-bent intent and its recent show of treachery to Pakatan policies, it can't be trusted. Then, Mat Sabu has stated that if a PAS man becomes MB Selangor, Pakatan will lose the state in the next election.

Additionally I read in the blog of Dato' Ariff Sabri (better known as Sakmongkol AK74) recently, that PAS has demonstrated its treachery before, to Semangat 46 in the matter of not fulfilling its agreement to appoint a Semangat 46 ADUN as deputy MB in Kelantan after winning the state election in Kelantan.

If PAS insists on its own man as MB, then PKR and DAP in heeding the words of Mat Sabu will be better off becoming the state opposition, so as to better prepare themselves for the next state election.

Pity we don't have a bloke like Nizar Jamaluddin. Pity Khalid Ibrahim has chosen his 'new path' as he was (before his 'new path') the optimal choice in a pool of the disqualified (DAP) and unqualified (PAS and PKR minus Khalid).
Posted by KTemoc at 6:28 pm