Wonder where they are now? (3)

Today's where they are now is instead where he is now, meaning I intend to blog only on one person, because I detect a sense of manmanlai in his story, wakakaka.

Indeed where is Osman Aroff now?

Bloke was MB Kedah for almost ten years from 28 January 1985 to 16 June 16 1996, until he gave way to Sanusi Junid. After he lost his MB position (and I'll come to the why's soon) Dr Mahathir, a fellow Kedahan and then PM and UMNO party president, created a special post for him so he wouldn't feel so left out after being dethroned from MB to nobody, wakakaka.

As I had often written, one of Dr Mahathir 's weaknesses has been his quite invincible 'loyalty' (regardless) to his people, especially UMNO-ites, so his compassionate empathy for Osman Aroff's likely post-MB despondency wasn't surprising. Mind you, I suspect Dr Mahathir might have made 3 exceptions to his general support, sympathy and sense of compassionate empathy for UMNO-ites, they being you-know-who wakakaka, AAB and AAB's S-I-L, wakakaka.

Anyway, Osman Aroff came to fame or rather notoriety in 2006 under the AAB reign when he, a Kedahan and someone Dr M had personally helped, turned against the Grand Olde Man himself.

As we know, in 2005-6 relationship between Dr M and PM AAB turned sour because of the affairs of their respective son and son-in-law, apart from one bridge being too far, wakakaka. Dr M had then begun campaigning against AAB but he was repetitively 'blocked' from voicing his dissatisfaction.

Dr M then decided to become one of Kubang Pasu's divisional delegates to the UMNO general assembly that year so he could use that forum to voice his unhappiness with the AAB government. Kubang Pasu was his personal division for 30 over years.

MKINI reported: Mahathir is vying to be elected division delegate today and to eventually speak at the Umno general assembly, but his three former supporters told branch delegates last night that he was 'too old' and that it would 'split Umno'.

One of these three Hang Tuah's Redux, Osman Aroff, told Kubang Pasu delegates in his speech that Mahathir had a track record of causing disarray in UMNO and thus should be rejected as a delegate.

Hmmm, I thought another former UMNO bloke was the one who has a consistent history of being divisive, whether within UMNO or outside of it, wakakaka.

Anyway, Osman Aroff said: “We must remember it was because of Dr Mahathir that Umno was de-registered in 1987. It was also he, who chose to fight with his deputy (Anwar Ibrahim) in 1998. Such is Mahathir's record.”

Osman Aroff averred that if the delegates elect Mahathir to represent them, it would indicate that UMNO Kubang Pasu was against AAB, who was then UMNO president and PM.

Leaving Osman Aroff for a while and coming to Mr Manmanlai, many including kaytee thought the great split between him and his erstwhile godfather had first happened in 1998 when he attempted to 'persuade' the Grand Olde Man into 'early retirement' (wakakaka) a la Tun Razak vs T.A.R.

Manmanlai's stalking horse against Dr M in 1998 on allegations of the latter's practice of cronyism and nepotism was then the UMNO Youth Chief, a bloke by the name of Ahmad Zahid Hamidi who today is dangerously within a heart beat from being the next PM of Malaysia, wakakaka.

Good Lord, if or when Ahmad Zahid does become PM, guess who will bang his head kau kau against a granite wall, wakakaka, and then, surely then the sky will come falling down, wakakaka. 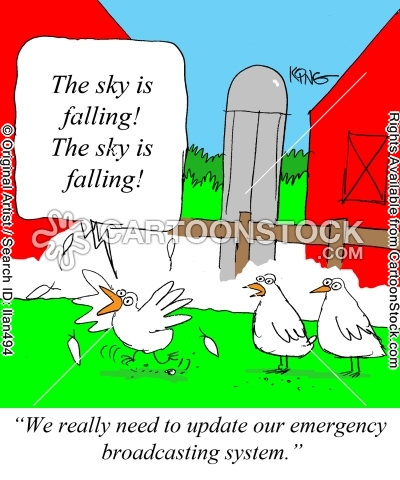 It seems from a book I came across that Mr Manmanlai had entertained his imperious ambitions much much earlier and conducted a power struggle against his benefactor though proxies. I wonder whether he began having such daring thoughts after he saw how easy and successful it had been for him to humiliate Ghafar Baba, one of the pre-Merdeka UMNO leaders, into early retirement at the 1993 UMNO general assembly.

The saddest account I've heard of Ghafar Baba's humiliating defeat by a man who parachuted into UMNO just a mere 10 years earlier was that after losing his deputy party presidential position to Manmanlai at the UMNO Building he was ignored by all as those UMNO bodek-ites rushed to crowd around the new UMNO NO 2, coincidentally a man who relished (and presumably still does) such bodek-ing wakakaka.

It was said Ghafar Baba represented a rather pathetic figure as he shuffled around aimlessly (lost in thoughts or in his humiliated misery) in the outer lobby of the UMNO Building, all by his lonesome self, with a  couple of cheap looking plastic shopping bags on his arms. It was truly a sad picture not unlike the one in 1999 of Uncle Lim KS walking away from the EC counting hall, also by his lonesome self, immediately after it was confirmed he lost his federal seat.

After Manmanlai deposed Ghafar Baba as UMNO No 2, he of course became the DPM. I wonder, was it then he saw or thought how easy it would be to move expeditiously to the UMNO top?

I think it was either RPK (or someone else?) who commented on this, that Dr M was no Ghafar Baba and Mr Manmanlai brought himself a whole load of trouble in making his impatient move.

In a book by Hwang In-Won titled 'Personalized Politics: The Malaysian State Under Mahathir', apparently after the 1995 general elections, Anwar's men were generally victorious in their party factional challenges against Dr M's men which effectively neutralised most of Dr M's political manoeuvres and thus slowly his grip on party powers.

The legendary Greek story teller, Aesop related a fable in which  a man helped a viper. The man had revived a viper suffering from freezing cold by holding it in the warmth of his bosom. After the viper was sufficiently revived, it bit the man. 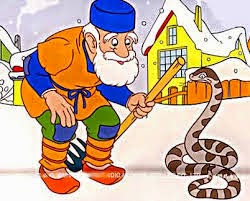 Since that fable, the viper became proverbial as a vicious betrayer. In ancient Rome, Cicero used the expression ‘in sinu viperam habere’ (‘to hold a viper on the bosom’), to mean one who betrays or is false to those who have supported or nourished him or her.

Did Dr M ever consider that he had nourished a viper on his bosom? wakakaka.

Continuing with Hwang In-Won's political analysis: although Anwar then didn't openly show his intention to topple Dr M, his machinery campaigned very hard in the Kedah UMNO divisional election, where then Dr M saw quite a number of his men lose their positions with some not even wanting (or daring) to contest. It was both a test and a demonstration of siapa raja in UMNO!

Their power struggles against each other continued with increasing friction, with Dr M introducing the 'no contest' policy on the party two top positions which Manmanlai had to grudgingly accede to.

Their struggle culminated in the Osman Aroff versus Sanusi Junid's struggle for the Kedah MB position, with Manmanlai's faction (22 UMNO ADUNs) writing to Dr M to protest against removing Osman Aroff as MB. Though they subsequently apologised to Dr M, they refused to back down from their defiant demand.

Manmanlai of course manmanlai-ed, wakakaka, stating that it was regrettable that the 22 ADUNs had been defiant towards Dr M, but also asserted that their views should NOT be ignored or taken lightly. Wakakaka.

It was undoubtedly a war by proxies, with Manmanlai getting the better of his godfather who had anointed him as heir apparent, even in the Grand Olde Man's own state of Kedah. Oh Mahathir, ‘in sinu viperam habere’? wakakaka.

Suddenly, Osman Aroff resigned due to a Kedah businessman by the name of Syed Mansor bin Syed Salim accusing him publicly of corruption (very detailed accusations). Osman Aroff said he would sue the accuser but subsequently backed down, following which he had no choice but to resign. So Sanusi Junid succeeded him as MB.

The interesting bit has been that despite Osman Aroff being seen to be a proxy of Manmanlai in the latter's power struggle against Dr M, as mentioned earlier, Dr M nonetheless created a special position for Aroff. 'Twas to be proven as another ‘in sinu viperam habere’ in 2006, wakakaka.

Would Manmanlai have done that for someone who is seen to be in his rival's camp? You tell me, wakakaka.

Anyway, Osman Aroff has done well especially after he badmouthed Dr M for AAB, wakakaka. I believe he was also appointed as a director of the proposed US$ 7-billion Trans Peninsula Petroleum (TPP Bhd) oil pipeline, coincidentally in 2006 wakakaka, but alas, MITI in March 2010 announced the cancellation of its approval for the project.

I last saw him together with Din Merican when the latter was honoured by the Agong.

I wonder what Osman Aroff is doing today? But surely not buying cakes from Dr M's bakery, wakakaka. 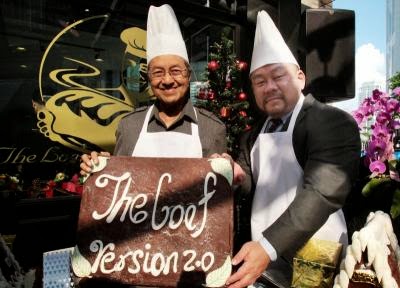