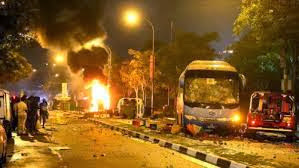 If those Banglas were to be in Malaysia, the riots might not have occurred (note: 'might not' because riots could still happen for other reasons, wakakaka).

Yes, I heard that in Malaysia they could apply for citizenship or at least blue IC, or marry our lovely sweeties to eventually became 1st class citizens of our wonderful beautiful nation, where they would be made into millionaires to purportedly 'protect' Islam, as we've been enlightened by UMNO's Mohd Haniff Koslan.

And they would have lived happily ever after, wakakaka.

And not only that but my dear Vango of Hindraf would then boast that the Malay gene pool would have been considerably improved by these "Malays", where Vango referred to them as "Malays" with an emphasis on the quotation marks, wakakaka.

But alas, they went instead to Singapore where I suppose jobs are probably-relatively better remunerated.

So, after several days of probably hard backbreaking work, missing their Dhaka weekend evening out, feeling lonely and blue while thinking of and missing gorgeous, hot and sexy Kanta, Mita, Sadia, Nipa and Farhana Nisho back in Dhaka, Rajshahi, Chittagong, etc, even up north in Rangpur, they would take the next best alternative, namely (no, not what you're thinking wakakaka), the happy brew ...

... which someone unfortunately omitted telling them that too much of a good thing, like sex, tau-yu (soya sauce), salt, chili padi (Birdseye chillie), and santan (coconut milk), can be really bad.

One question begs to be asked: Why were those Banglas drinking the good brew when they came from a land under syariah-hudud laws?

PAS please take note - not so much to nab those Banglas, but more to realize syariah-hudud laws won't discipline Muslims into strict self-imposed observation.

Even in India, alcohol consumption in public is frowned upon. Once I was in New Delhi with my aneh Rama. Both of us were sitting down to dinner at a nice lovely hotel where we ordered tosai or dosa (in India one can get a metre-long dosa, wakakaka) with pomfret curry and all the works. Naturally we ordered beer which we intended to round up with several shots of Mr Walker (the Black one).

When the beer was served by a very nice and polite elderly waiter, I noted he looked after me with much dedication but missed pouring the golden stuff for my aneh which of course provoked a thirsty Rama to jab pointedly at his glass more than once. But mamak (uncle) after glaring at his 'rudeness' (no, mamak wasn't named Tunku Aziz, wakakaka) ignored him.

So putting on my best smile which an 'ex' of mine once informed me was terrifying, wakakaka, I asked politely for mamak to fill up aneh's glass, but mamak answered:

"Sir, he's an Indian. He should not be drinking alcohol."

To cut the story short, what with mamak and aneh glaring at each other like the other bloke was just across the Indo-Pakistani border, wakakaka, I told mamak to just leave the beer bottles on the table, and I would handle them myself - kaytee, ever the diplomat, wakakaka.

Anyway, back to our Banglas in Singapore. Several years ago I posted The Toddy Syndrome in which I penned:

The typically hardworking but unskilled Indian struggles at the lower scale of employment, earns enough to live from hand to mouth day to day, has no or little after-hours amenities, has many children as a result of their sole entertainment (not unlike Chinese farmers in remote rural areas), at the end of work dashes off to the local ‘pub’ for several tin mugs of watered toddy, gets himself pissed drunk to blank out his agonizing frustration, apprehension, worries, physical/mental pain, hopelessness and anger at his-fate-decided-by-the-gods, if not knocked out by the toddy comes home and, where in many cases, tries to solve his problems a wee bit by thrashing the hell out of his wife and kids. 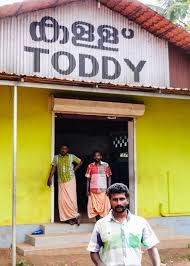 The evil toddy (even though kaytee loves a drop or two of this brew occasionally, in moderation) has become the straw to hang on for many socially-drowning Indians. Its devastating effect produces the syndrome, but the disease is hopelessness in an increasing competitive world that is rapidly leaving many Indian Malaysians behind. Their children are born into immediate disadvantage. Their community is looked down upon. They are assigned ownership of Malaysian crimes which cannot be attributed to foreign migrant workers. They have become the debris, flotsam and garbage of Malaysian society.


Though it was written with our local Indians in mind, I believe it could apply to those migrant Bangla workers in Singapore too, but I wonder whether they were imbibing toddy or the more powerful and more evil samsu?

But making such areas alcohol free would be a good start. Australia took this step some years ago when the authorities realized the gravity of alcoholism in conjunction with the proximity of a steady supply of said brew for some people. There's a very strictly imposed law where one cannot buy alcohol and consume it within a certain distance of the shop selling the alcohol.

You know, from the tragedy of the fatal accident and the ensuing riots, came one humorous tidbit which we Malaysians can related to all too easily. At a web forum, where most people were talking about the riots, the associated dangers and social issues, one bright spark who goes by the tweeter moniker of SkysoBlue remarked in the most practical terms, as follows:

Wakakaka, but at least you Sings don't have a compulsory history exam as we Malaysians have, shafted down our throats with the blessing and order of UMNO.
Posted by KTemoc at 1:08 pm