China may be the key in North Korean hostage situation 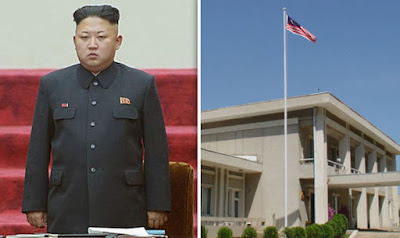 SEOUL: The North Korean regime says it will not allow Malaysian citizens to leave the country, hours after both countries sent home their ambassadors amid worsening ties.

“All Malaysian nationals in the DPRK will be temporarily prohibited from leaving the country until the incident that happened in Malaysia is properly solved,” the government-controlled Korea Central News Agency said, citing the foreign ministry.

In an immediate reaction, Youth and Sports Minister Khairy Jamaluddin said the latest move was “tantamount to taking hostages”.

“This is unacceptable. DPRK must allow free passage of Malaysians at once,” he said on Twitter.

There are currently 11 Malaysians in North Korea, nine of whom are embassy staff and two who are part of the UN Food Programme.

The North Korean government, as I posted earlier, is mad, irrational and couldn't-care-less about international diplomatic norms and protocol.

I mentioned this in an earlier post titled Negara Gila.

Taking Malaysians as hostages would be saap-saap-suoi (chicken feed stuff) compared to the North Korean government having already kidnapped or murdered people on the international arena.

I recommend staying cool and not provoking that crazy government. They want mucho face.

Barring North Koreans from leaving Malaysia could be counter-productive as Pyongyang couldn't care less about its citizens, who I suspect would be quite happy to remain here as our 'guests' forever.

Go behind the public and diplomatic scenes, don't react to agitations (batu-api-rizations) from/by South Korea or the USA, and instead use the good office of the Chinese government to 'slow-talk' those crazies.

11 Malaysian lives in Pyongyang depend on cool heads in Putrajaya. I wish the government best of luck in arriving at a safe decision for our people, and to our 11 citizens in Pyongyang, selamat bertenang. May the heavens bless and smile on you.