Pakatan led by weakest leader in the world?

As I see it, Karamjit Gill is either pro BN or anti Pakatan, or both wakakaka!

Recently he wrote an article in Malaysiakini titled Did Pakatan attack hastily? in which he criticized Pakatan. One of his major criticisms is as follows (extract): 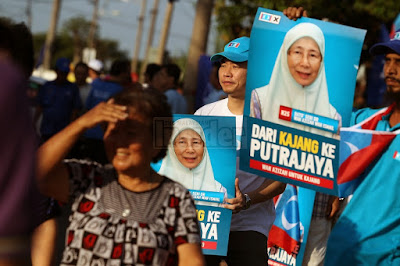 The Pakatan battalion is led by possibly the weakest leader in the world.

Although Lim Kit Siang says that BN is comprised of clowns and they are like a circus, the fact remains that the head of Pakatan itself is a clown. She has no idea what to say when there is no script to read from. In order to ascertain she is a leader, she rattles statements that would make Ahmad Maslan look intelligent.

She is a symbol of weakness. Until a new leader is selected, Pakatan will continue to struggle.

Very harsh words, but alas, I feel Karamjit might be right.

I feel sorry for Wan Azizah because she is known to be a reluctant politician, never wanting to be one but being unfortunately thrust into that role by her MIA hubby and a PKR which has more Chiefs than Indians.

She took over from Anwar when he went to jail for Sodomy I, gave the federal seat back to hubby when AAB freed him, took over again in Sodomy II including a state seat scandalized outrageously by the Kajang Satay fiasco, which incidentally was supported by some DAP Chicken Little, much to my annoyance.

I feel even more ashamed when Chicken Little begged the Dwarf for a deputy speaker position - what the f* for; how would this f* useless post help the rakyat?

From Wan Azizah's regular sub-ing for Anwar, it would seem that either there is a dearth of worthy alternative politicians in PKR (has that been why it behaves like a taxi sapu, wakakaka?) or the Anwar clan is keeping certain positions within their family embrace.

At one stage they even considered bringing Nurul Izzah's younger sister, sweetie Nurul Nuha, into the game but from what I read somewhere (can't recall, sorry), the Pakatan leaders had second thoughts after hearing her speak, wakakaka. 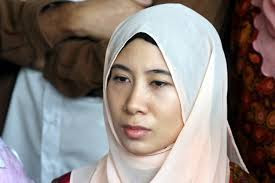 There have been complaints too that Wan Azizah didn't do much for the people in Kajang or for that matter in Permatang Pauh as their respective representative. Was it because she had merely filled in for her absent husband as a representative, but not to the extent of meeting the accompanying responsibilities of one?

DAP gallantly offered to look after her Permatang Pauh duties while PKR in Selangor did likewise for Kajang, but what did/does she do then? Nothing? Why shouldn't/couldn't she do those duties herself? After all she's been paid for both her representative positions.

In Sarawak 2011 state elections, DAP had surrendered its Batu Lintang seat in exchange for Padungan, an exchange which was initiated by PKR. But PKR's Dominique Ng, who previously held Padungan but was not given another seat to contest, went rogue and stood as an independent against DAP there, in total violation against a Pakatan deal.

What did Wan Azizah as party president do?

As if the 3-corner fight with a PKR interloper wasn't bad enough, guess how my temperature soared when I read The Malaysian Insider reporting:

Meanwhile PKR’s top leadership have refrained from condemning Ng for his contest with party president Datuk Seri Dr Wan Azizah Wan Ismail even sending the former an SMS to wish him well.

How f* sweet and how f* treacherous PKR had been. But wait, here’s the froggie clincher:

When asked if the party would accept Ng back into its fold should he request to do so in the future, Wan Azizah did the samba and said: “We cannot force him against his will.”

Another of her unfortunate demerits has been her scary and preposterous declaration or boast that her hubby is God's gift to the people.

Wakakaka, I wonder whether this had anything to do to influence HRH's perceptions of her unsuitability to be MB Selangor?

But my poor impression of her leadership in PKR (let alone Pakatan) was formed during the PKR party elections, no not the last one which was also bad but the far more atrocious one before, in 2010, when even Brother Haris Ibrahim saw fit to step in to question the party election "process", wakakaka.

Because of the perceived dodgyness of the party polls, then-PKR member Jonson Chong wrote an immaculate letter of appeal to her, the party president, offering to fund an independent audit of one polling station in Sabah so as to settle the unrest within some sections of the party, but the sad shocking shameful silence from her was deafening  – see Dr Wan Azizah ignores Jonson Chong's plea?

It was the most disgraceful behaviour by a party president on such a crucial moment for her party. Haris Ibrahim praised Jonson for his constructive approach but alas, not so Wan Azizah, who as mentioned, ignored him completely - yes, we would like to know whether she had even replied to Jonson?

Why did a party president ignore a constructive proposal from a sensible, fair and balanced gentleman like Jonson Chong which would have put to rest all complaints if the polls had been conducted fairly, unless for reasons known only to herself, she chose not to.

Yes, she did nothing to instil confidence in her leadership and thus the credibility of the election "process" despite criticisms from within and outside her party.

Since that day, my once-respect for the lady plummeted to zilch. She may be a kindly looking lady but I reckon from her poor political performance she is not suitable to be the president of a political party.

How in the world then can she lead Pakatan? Why is Pakatan recycling this known-to-be-reluctant politician?

As my visitor Bruno would say: "Go figure". Wakakaka.