Malaysian bull about a pig but not a horse

Malaysiakini - 'Half-pig' actor not in posters because he’s little-known (extracts):

The missing pig character Zhu Bajie from a billboard and posters on the Hong Kong fantasy film 'Journey to the West - The Monkey King 2' is because the actor, Xiao Shen Yang, is less known in Malaysia, the film distributor has said.

Chinese daily Oriental Daily News quotes GSC Movies distribution manager Hou Xiu Chang as saying that the decision was made based on the business model and actor prominence.

“In Malaysia, many people know Aaron Kwok and Him Law. Initially, we planned to put the characters of the Monkey King or White-Bone Demon on the posters.

“But the film distributor from China could not make it on time to give us the poster,” Hou was quoted as saying, while also admitting that GSC removed Zhu Bajie from the local billboards and posters.

So Zhu Bajie (Too Pak Kwai in Penang Hokkien) has been removed from the movie poster because the actor playing that character (adapted from the book 'Journey to the West') is not well known in Malaysia?

As a Malaysiakini reader, Awang Top, put it rather cleverly: "We don't even know the name of the horse. So delete the horse." Wakakaka.

The movie is in Chinese and its posters and billboards unlikely to be noticed by Malays, so what's the problem?

In Chinese literature 'Journey to the West' is one of the four great Chinese classical novels (masterpieces), the other three being Romance of the 3 Kingdoms, Water Margin, and Dreams of the Red Chamber.

There is a recognized fifth though, but as yet to be officially acknowledged. I'll be blogging on this in my other blog, KTemoc Kongsamkok.

And in 'Journey to the West' the character of Zhu Bajie is an intrinsic part of the group travelling to India to obtain the Buddhist holy scripts.

What sheer utter preposterous bullshit is it to say Zhu Bajie has been omitted from the billboard because the actor playing Zhu Bajie (Piggy) was not well-known. That's double bullshit because comedian Xiao Shen Yang, who played Piggy has been very well-known, especially in China

In some ways I don't grudge the local distributor for the bullshit because obviously they are ber-carma-ing with the Home Ministry.

As I have written in my previous post Greedy Malaysians 'selling away' our local businesses?, I've seen hijab-ed sweeties in Australia working at supermarket and Costco handling pork meat (wrapped), and that I suppose the real Islam only instructs Muslims not to partake of the non-halal stuff and not to treat them as radioactive or toxic material.

My visitor Rocketman has also commented in that post: "... The Wantan mee stall at the nearby market is operated by an Indonesian woman. She's hardworking, and speaks basic Cantonese, Hokkien, even a bit of Hakka. I'm told the stall is still licensed to the previous local proprietor, but she's nowhere to be seen these days."

"The non-Halal Wantan mee doesn't seem to bother her, I'm sure she's a good Muslim who doesn't eat pork. Its just a job to her, unlike the local Jihadis who go feral upon finding molecular-amount traces of porcine DNA in chocolate."

What f* ridiculous extreme antic will our Malaysian authorities think of next? But remember, two pigs were on board Noah's Ark, in accordance with god's wish. 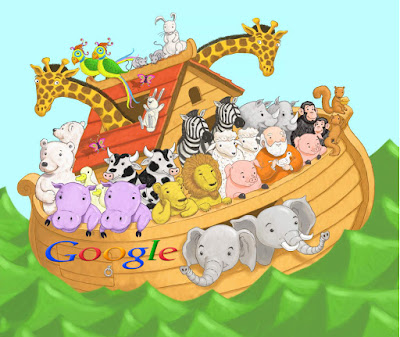