The Baker & his Loaf of 'Sweetbread'.

The way I see it, not that I'm a rocket scientist in my thinking wakakaka, Mahathir doesn't want UMNO touched nor indeed changed from the form he had personally sculpted the party's characteristics, ketuanan philosophies and its members' mindset. I believe he wants his son to inherit his "wonderful" party, and only Najib stands in the way. 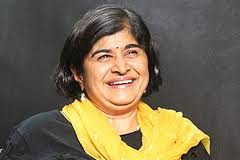 Thus Ambiga Sreenevasan was sadly "pissing into the wind" (hope sweetie will excuse kaytee's use of this naughty expression) when she suggested (reported by Malay Mail Online) he would gain more support if his campaign was to seek wider reforms, where sweeties 'wider reforms' would presumably embrace changes that will "disadvantage" UMNO from the current extra leverage it's has been enjoying since 1981, such as effective control of the EC and its notorious gerrymandering, control of the public institutions including the civil service, police and even the third arm of government, the judiciary.

And we mustn't forget Mahathir's role in reducing the balancing-veto powers of the Dewan Senate for states' and minorities' rights into what it has been since he changed the format of the Upper House, an automatic "yes-men" to the legislations and policies passed by the Dewan Rakyat, where states' objections would be overwhelmingly swarmed and dismissed by the majority of federal government appointees.

In fact, the Baker wants to borrow the Ayatollahs' style of government, where the PM and cabinet must kowtow to an (UMNO) council of elders, in which presumably he or his proxy sits and reigns.

The Star Online reported: Tun Dr Mahathir Mohamad has admitted to mooting the idea of a council of elders to advise a Prime Minister, who replaces Datuk Seri Najib Tun Razak, as it would allow him to listen to different opinions.

He said this was because under the current system, the prime minister chooses his own Cabinet and would pick those who favour his decisions all the time.

“Whatever the prime minister does will be okayed by the Cabinet.

“If there is an outside council appointed by other people, they may not agree with him all the time.

“They can give their opinions, which the PM may not necessarily accept, but at least it will allow him to hear other opinions,” the former prime minister told reporters after speaking at a symposium on corruption on Wednesday.

By not mentioning that he as PM had NOT depended on such a council of elders as he governed his merry way into profligate "happenings" in Forex, Maminco, Bank Bumi, MAS, Perwaja and god-knows-what-else, you can say this Melayu mudah lupa.

And we can assume his so-called 'council of elders' to be himself, the Numero Uno, Emperor of Malaysia.

And that's what I meant by him borrowing the Ayatollahs' style of government, where in Iran the elected President and his Administration MUST pay heed to the dictates, instructions and whims and fancies of the Shora-ye Negahban-e Qanun-e Assassi or Guardian Council (of ayatollahs).

Without the Guardian Council, the Iranian Parliament has no legal status. The Council can disqualify candidates it doesn't like and send legislation it doesn't approve of back to Parliament. Basically it places itself on the right hand of its god, well and truly above the people's rights. The Iranian Guardian Council is the new Shahanshah or King of Kings.

Won't Mahathir's 'council of elders' be similarly beyond and indeed well above the people's choice?

And let us remember he was the PM who institutionalized and strengthened Jakim in 1996, where we're now reaping the nastiness of his poisonous seed.

He was also the PM who declared in 2001 that 'Malaysia is an Islamic State' and then less than a year later, 'Malaysia is not a moderate Islamic State but a fundamentalist Islamic State', incidentally condemned by Lim Kit Siang respectively as Dr M's 929 and 617 Declarations - aiyoyo, ni Cina mudah lupa juga, wakakaka. Also do read my
MCA's sweet revenge at PKR, courtesy of Tian Chua, wakakaka.

Why then would I tolerate Lim Kit Siang playing footsie-tootsie with such a man (Mahathir that is, not just Tian Chua, wakakaka)?

Najib may well be bad and needs to be removed, but let us NOT do so by dancing to the tune, lure and seduction of Mahathir Mohamad. In fact, if at all possible, we should be going after him for accountability of his 22 years of government.

By the by, I hope you know what 'sweetbread' is, wakakaka.