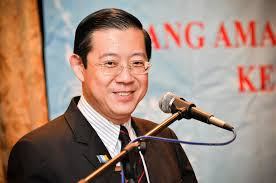 PKR’s Johari Abdul has failed to convince Chief Minister Lim Guan Eng that five PKR assemblypersons who abstained from voting against an Umno motion on reclamation did so based on their conscience.

“When he (Johari) said that the PKR 5 voted according to their conscience, does it mean that the four other PKR assemblymen who voted against the Umno motion, did not have any conscience?” Lim asked at a press conference today.

KT comment: I'll have more to say about this "conscience voting" soon, wakakaka.

KT comment: Reminder, 4 Chinese PKR Aduns abstained from voting against the UMNO proposal which is the same as voting with UMNO or alternatively, voting AGAINST the 4 Malay PKR Aduns who voted together with the DAP-led Pakatan state government, one of whom is Rashid Hasnon, the DCM I of Penang.

“Do they not have any conscience when they do not want to see the state go bankrupt?” Lim queried, when asked to response to Johari’s statement at a press conference held in Kuala Lumpur yesterday. [...]

Lim reiterated that cancellation of projects can bring big consequences to Penang, saying that the compensation amount would run into RM1 billion or more.

“As a government, we have to behave responsibly, which is why the four PKR assemblymen voted against the Umno motion.

Lim said Johari may have been aware of the facts of the incident before announcing his support for the PKR rebels.

Johari may not know that the PKR reps did not inform Rashid, whom DAP recognises as the party leader in Penang, before they abstained from voting, Lim added.

“This is unacceptable,” he said. Lim has earlier accused Ong, who led the other four in abstention, of attempting to topple Rashid, which Ong had denied.

This is Part II to my earlier post Chinese PKR against DAP four days ago.

Lim GE obviously isn't going to allow the 5 PKR Aduns of Penang (4 of them Chinese versus 4 Malay PKR Aduns, where the latter voted with the DAP-led state government) get away with their virtually anti-Pakatan voting with the pathetic weak attempt by PKR HQ to broad brush away their political rebellion.

From Lim's comments, it's apparently clear that the PKR leadership in Penang (DCM I Rashid Hasnon) was not even aware of the 4 Chinese PKR Aduns' intention to abstain. Thus it could be said that poor unsuspecting Rashid Hasnon had been embarrassingly ambushed-sabotaged by his own party people.

Some people who've criticized Lim GE as being dictatorial obviously don't understand Westminster parliamentary procedures or rather process, where "conscience vote" by party parliamentarians (or Aduns) is only allowed when the highest party leadership publicly permits it, but as we know, such permission was NOT given by PKR prior to the voting.

Malaysiakini also reported: On the merits of the motion itself, Lim said demanding that DEIA or public consultation to be carried out is “redundant” as these are already provided for under federal laws.

Lim also refuted Farid’s call for new reclamation projects to be halted, saying it included those approved by the previous government, prior to 2008.

He challenged Farid to request that the federal government provide an indemnity in the event compensation needs to be paid out of the Penang government coffers.

“If you just want to study projects which are yet to be approved, then we don't need such a motion, as existing laws already compel the state government to do so before any approval is given,” Lim said.

“We need to look at the financial consequences of this motion, if you don't follow the contract, you need to pay,” he added.

That's responsible governance and public accountability, which PKR should bloody learn, and not only in parliamentary process but also in forming alliance with a political party which is strongly and defiantly against Pakatan Harapan as well as in photo-ops with unfriendly aliens, wakakaka.