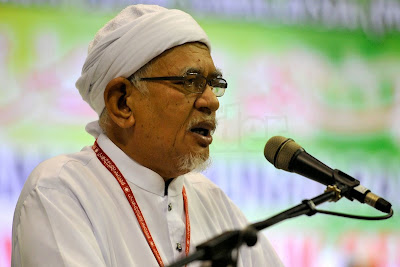 Early this year I posted Local council elections? - USTFU where USTFU means ..... (well, you work it out, wakakaka).

USTFU has proven to be very useful in the distant past but today I reckon it lacks its old latent punch.

Recent practitioner of USTFU is Pak Haji Hadi Awang when he raised concerns over DAP's keenness to have local council elections.

TMI published In Hadi’s May 13 remarks, civil society sees shades of Perkasa, Isma reporting that Jeffrey Phang, the co-chair of the Coalition of Good Governance (CGG ), lambasted Pak Hai for his May-13 warning as illogical, wrong and an attempt to spread fear.

Phang said: "Bringing in a threat of racial disturbance and violence to substantiate his objection to local council election is highly irresponsible and tantamount to fear-mongering and brings the PAS leader to the same level as the likes of personalities from Isma, Perkasa and Perkida."

"CGG finds it illogical to link a May 13 possibility with local council elections. Hadi Awang’s assumption of racial animosity among the people is wrong."

The PAS president also said his party had objected to the DAP’s recent attempt to introduce local council elections in Penang as it did not want the Chinese to control the cities.

Well well well, so much for the so-called Islamic Party which by Islamic values should be supranationalistic (ie. above race, creed and colour), and sadly by Pak Haji's very own words, shows instead it's nothing more than a race-based (rather than Islam-based) political party - meaning it's no difference from UMNO, but at least UMNO is honest it's a race-based party.

But do you realize that PAS by its (Pak Haji's) ethnocentric mentality is an insult to a great supranationalistic religion behind which PAS brazenly hides its racially political face? What would the Prophet (pbuh) have said?

Pak Haji was also reported as saying: He stopped DAP from having local council elections for the Chinese, without caring for the Malay Muslims.


I wonder who responded swiftly and overwhelming to the last horrendous flood in Kelantan? Wasn't that proof that when push comes to shove (in any national emergency) Malaysians, irrespective of race and religion, always come together. But nonetheless, it has been an indictment on Pak Haji's narrow-minded and very racial perspective, besides his ill-informed awareness of Malaysian social affairs.


Pak Haji's too-conscious factorization and differentiation of aspects Malay or Chinese reminds me of another person, one whose writing I in general enjoy reading, Dr Bakri Musa, a former Malaysian now residing in the USA as a surgeon who still writes prolifically on Malay-Malaysian issues, but who sadly was (bizarrely for such a learned person) ill-informed about Chinese, Confucianism and Chinese culture.

Once he wrote on his Facebook site, among other things critical of the Chinese and Confucian (in which he instead showed himself to be confused about, wakakaka) his disdain for Chinese as follows: "... it is just not in the Chinese culture to help those less fortunate, especially those outside their clan or race".

I believe the Chinese (perhaps not the Communist Chinese or Singapore government) is second to none in philanthropy - they have a proud history of excellence in philanthropic performance, whether conducted by religious or non-religious organizations, even in Malaya/Malaysia.

Take his comment about the Chinese 'not helping those outside the Chinese race' - as one small example, it was in the immediate aftermath of the 2004 Boxing Day tsunami that Penang Chinese organizations were among the first, if not the first, to be giving out much needed aid to Penang Malay fishing communities on its north-west coast ...

... leading one Malay resident to comment (words to the effect) that the Chinese gave out aid without first determining whether the recipient was a Chinese or Malay, Muslim or non-Muslim, UMNO or PKR member.

Such racist and religious discriminations would have been completely anathema to Confucian ethics or Buddhist teachings, two principal guiding value-systems of the Chinese.

Sadly, Dr Bakri hasn't been well acquainted with the precepts and teachings of these two religions, well, especially with Confucianism, from what he had written.

Incidentally, we might remind ourselves that Confucianism is about cultivating, practicing and promoting the 8 virtues of benevolence, righteousness, courtesy, wisdom, fidelity, loyalty, filial piety and service to elders.

Then there was another medical (hole in heart?) case of a Malay baby, made well known through Jeff Ooi's blog several years back, when Jeff was our king of bloggers.

Following Jeff Ooi's appeal for donations for the baby's heart operations through his Screenshot blog, the majority of donors for her surgical operations proved to generous Chinese Malaysians. The father of the baby acknowledged this, remarking his astonishment that the Chinese could be so generous, more so for a Malay baby.

Therein the father's comments could perhaps be found a possible reason for a common but incorrect belief by Malays, like those held by Dr Bakri and our Pak Haji, of so-called Chinese ruthless selfishness and non-charitable qualities and racially-based charity.

While I had suspected that underlying the so incorrect belief in matters Chinese, Confucianism and Chinese culture by Dr Bakri Musa and the father (of the hole-in-heart baby who underwent the heart surgery) could be misinformation or inadequate information and/or poor observations, spliced with an intrinsic prejudice and/or deep-rooted suspicions of the Chinese in Malaysia, I lament Pak Haji's current mindset considering he's supposed to be an Islamic leader who should be providing inspirational supranationislitic example to us.

He's shown himself to be no one more than a narrow-minded provincial bigot.
Posted by KTemoc at 6:15 pm