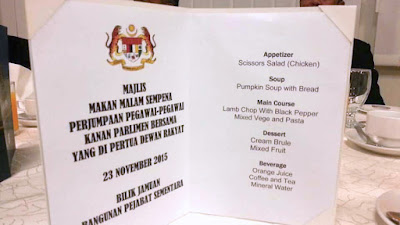 After all, he/she is probably a product of our much mangled education system which gives us our notorious Manglish.

Yes, our education system had been mangled kau kau by our succession of Education Ministers (including the 'Mentor' and his 'Mentee', wakakaka) who treated Malaysian children's education like a political football for their personal intraparty standing.

By the by, have you heard of Chateaubriand steak? 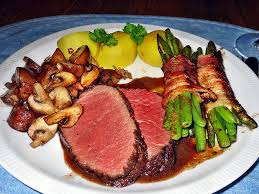 During Napoleon Bonaparte's time, Chef Montmireil prepared this by-now famous dish for the Vicomte François-René de Chateaubriand, an interesting bloke who served as an ambassador for his emperor, and who was also a writer and historian. Chateaubriand is considered as the founder of romanticism in French literature. The chef named the steak dish after the Viscount.

I love (still do) and used to eat Chateaubriand steak in KL at the Le Coq d'Or (The Golden Cockerel) located on Jalan Ampang. I heard with much sad nostalgia that the restaurant closed down for good in 2001 and the lovely stately-looking building (Bok House) was demolished much against the pleas of local heritage activists.

The problem with having a Chateaubriand steak was that it was quite a big cut of tenderloin beef which served two (though I was prepared to eat for both if my sweetie partner were to jaga badan, wakakaka). After the steak, we would have Bombe Alaska as desert, yummy. Oh, those wonderful KL days.

If Parliament House were to ever serve Chateaubriand steak, please please don't list it on the menu as Satu-Biryani steak, wakakaka.