I'm rather disappointed with what we see as the DAP recent tactic vis-a-vis PAS and its hudud. I feel DAP has mangled (f**kup) its handling of the sorry situation. But before I come to that, let's quickly recap what I remember of DAP, the political party that I have shown my support for, though not as a card carrying member. Please advise where I am incorrect in my history of DAP's political aspirations. 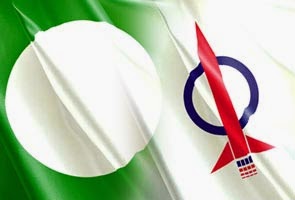 Years ago the DAP standing by its lonesome self and performing bloody well to public expectations and satisfaction had modest and reasonable aim, eg. of winning majority rule in Penang. Timing was the problem. Thus bad timing then for the DAP saw their Project Tanjung went kaput.

That's because in those earlier days, Penangites by their conservative nature (disparagingly described as the kedukut mentality) were and presumably still are very cautious about changes, as (the late) Lee Kuan Yew and his PAP were to discover in those early days of Malaysia.

LKY on seeing the massive Penang crowd attending his election rallies on the island would have been encouraged into fantasizing that the then Chinese-dominated state would run straight into the open arms of papa, but alas for him, Chinese Penangites saw LKY as what they had previously viewed Anwar Ibrahim, a political curiosity to listen to for the night's entertainment at the City Hall padang, to be followed by a late night repast at the Esplanade's hawkers corner, probably of jiu-hoo-eng-chai (blanched cuttlefish and kangkung laden with chillie & hoisin sauce and grilled sesame seeds), satay (wakakaka), lor-bah (haram stuff, wakakaka), koay-teow-t'ng (koay teow noodle soup with fishballs and meat) and rojak, .....

Yes sir, timing was everything because the "original" Gerakan Party hit the right spot at the right time in May 1969, winning by a landslide. Penangites by then had had enough of Wong Pow Nee and his Perikatan. Yes, beautiful timing for Lim Chong Eu and gang.

Gerakan ruled for 40 years. Despite their incrementally changing character from the great Gerakan of 1969 into an UMNO underling, made worse by the UMNO 'divide & rule' (inherited from the Brit master) of Chinese-based parties by pressuring Gerakan to give up several of their seats to their mortal enemy MCA, so that the two Chinese* mortal foes in their divided political existence could never combine to confront Penang UMNO.

* Gerakan has been mainly Chinese, and for simplicity sake, will be described here as a Chinese-based political party. It's also useful to remind ourselves that when Lim Keng Yaik joined Gerakan in the early 70's he and his so-called young turk reformers were all hardcore MCA people who didn't get along with Tan Siew Sin, thus Gerakan became even more Chinese.

Despite all above, BN-UMNO, wakakaka, continued to rule Penang for four decades. That was because, as mentioned, Chinese Penangites had been very very conservative especially in politics and didn't want to change their political preference ...

DAP then had a reasonable aim, namely, to deny BN-UMNO their 2/3 majority. The GE-12 results exceeded the DAP's expectation for they in collaboration with their Pakatan allies, not only denied BN-UMNO its 2/3 majority but majority rule in Penang as well ..... indeed to their own enormous surprise as they admitted they weren't quite prepared to rule. Jeff Ooi with just a MBA became top honcho (Chief of Staff) to Lim GE.

Personally I was rapt because Lim KS had finally realized both his political objectives. I had feared he might not have seen what he wanted achieved prior to his political retirement. He deserved realizing his dreams.

I was informed that in more than one way, Pakatan achieved their dazzling results because of Dr M, yes, none other, wakakaka.

One was his serial undermining of AAB, while another was as said, that in his hey days as PM he wanted federal constituencies to have the Malay:Chinese/Indian ratio of around (rough round figures) 60:40, as he assessed the nons in general would be his strongest supporters. He was proven right in 1999 and his successor AAB also benefited from his legacy in 2004.

But those constituencies were to subsequently become probably his major regret since 2008, resulting in that infamous racist insults Apa lagi Cina mahu and Najib's Chinese tsunami. Incidentally I riposted to the former with my letter to Malaysiakini titled Apa lagi UMNO mahu? wakakaka.

Dr M hadn't considered the possibility of PAS and DAP ever joining up in what he must have considered as The Unholy Trio, wakakaka, thanks to his erstwhile protege, Anwar Ibrahim. Those 60 Malay to 40 Non constituencies, so effective previously in stalling DAP and PAS individually in their political aspirations, have become precariously dodgy for BN against the new Unholy Trio, what with a moribund MCA and MIC.

May 2013 - wonderful news regardless of our remarkable EC which saw, just as an example, its ridiculous gerrymandering Grand Canyon-ish chasmic blasphemy in the Putrajaya vs Kapar constituencies, allowing the BN to continue to rule despite winning only 46% of the overall federal votes. And it was wonderful news because Pakatan won a shocking 52% of the votes.

What f* denial of the 2/3 majority to BN? Hey man, Pakatan has won the majority of votes! Okay, so gerrymandering might have prevented Pakatan from forming the new government, but nonetheless, that means they are sweetly poised to win in the next general election.

So with Pakatan garnering about 52% of the federal votes, there grew a new ecstatically exciting expectation, of Pakatan seizing Putrajaya by GE-14.

But alas, Pakatan is made up of three component parties, each with its own ideology and aspirations, and there's no political ideology more diverse in nature and character than PAS' Islamic theocracy and DAP's socialist secular democracy, though at times I wonder about DAP's claim secularism when a couple of its pollies would forget themselves in their halellujah-ing, wakakaka.

To cut discussions short since I am sure you all have been following the recent poisonous exchange of angry words between PAS and DAP, the honeymoon is over for these two parties. Gone are the days when PAS would praise Lim GE for his humbleness, or DAP's pollies would sprout Quranic verses (after clearing them with Tok Guru, in reality a form of manja-bodek, wakakaka), or DAP thinking of using PAS banner, and PAS offering it, for the 2013 general elections.

But DAP and PAS both want Pakatan to continue as there are mutual benefits but each has its own constituency to answer to. Invariably, with the two having totally different political ideology, there isn't going to be a win-win situation, more so when PAS under Pak Haji Hadi Awang's leadership decided to go solo on its hudud flight. So the DAP ack-ack guns had to be swung into action to shoot the hudud flight down, wakakaka

UMNO, MCA and Gerakan wait happily though anxiously in the wings like hungry grinning wolves for the two so-called Pakatan allies to go centrifugal, with the latter two jeering at DAP. Sadly there's some truth in DAP (perhaps unwittingly and indirectly) encouraging PAS in its Islamic drive, what with Lim GE referring to some great Caliph as the model for good governance and if I recall correctly, Nga from Perak dropping Quranic verses off his lips as if those were Canto sweet-nothings.

PAS on its part seems to be in a self-delusional world of its own, believing it has the support of DAP in its total Islamic ambition. It once criticized Karpal Singh as the sole obstacle to its theocratic aspiration, as if every other DAP pollies were on its side. Today, after its insistence on implementing hudud it blamed DAP as the sole obstacle while it believed other Chinese Malaysians don't mind. Its party president could even bring himself to say some Chinese still have a soft spot for the party.

But I don't agree with what DAP has done, selecting Pak Haji Hadi Awang as the man to be (politically) amputated - excuse the naughty pun - so as to save the general PAS body. The series of DAP insults and condemnations via the media against Pak Haji have virtually turned him into an Islamic hero, a martyr, and will no doubt force even the Erdogens to come to his defence.

How can DAP save the general PAS body when the wounds it has inflicted on Pak Haji has undoubtedly turned the entire PAS gangrenous to DAP's strategy?

The biadap-ish 'amputation' has been badly conceived and crudely and insensitively executed. DAP has in the process alienated the general neutral Malay by its biadap-ish aggression against a senior ulama who's still highly respected by significant segments of the Heartland.

So sadly, I have to conclude that today's DAP is seen to be too aggressive, appearing to Malays as not only ta'sopan santun but far worse, biadap. I feel that the DAP, for all its Malaysian-ness, has too much western political mentality and probably has also forgotten the value and techniques of Asian style negotiations, which take pains to confer mucho face to even the losers.

However, having said that, PAS in the person of Pak Haji and his ulama cohorts were arrogantly intransigent. Everyone could see it was hell-bent on hudud, and to hell with every other considerations including those of its ally. Did it expect DAP to commit political seppuku by supporting hudud?

PAS really didn't care whether it succeeded in its hudud drive, which if it did would of course be a bonus, as its objective was principally to score Islamic political points to stay in power - for more, see the Malay Mail Online's Three things we learned from: Kelantan’s hudud ambition.

Perhaps, in its silly wishful belief, PAS reckons that DAP will eventually capitulate because of DAP's ultra keenness on Pakatan to overthrow BN in GE-14.

But I must assert that DAP in its silly gambit in (politically) amputating Pak Haji from the PAS body has done more harm for itself. It must realize that if it is equally silly enough to still ally itself with PAS, there's a possibility that it will probably suffer its same fate of 1999.

I bet the majority of non-Muslim voters have by now written off PAS, so by continuing association with the party which wants hudud, the DAP may be viewed as a disgusting underling of PAS - don't worry, MCA and Gerakan will be working like mad to press home this perception.

The DAP would have been better off by having a clean breakoff with PAS, minus all those unpleasant ravings and rantings about Pak Haji. Let the Erdogens themselves take appropriate actions on how they would want to continue with DAP in Pakatan. Besides, by vilifying the old man, how would offended Malay voters consider the DAP, especially its Malay candidates like Ariff Sabri, Dyana Sofya and more?

But even if the voters were to forgive DAP for its obsession with allying itself with PAS to take Putrajaya, there is still a very important unanswered question, namely, where is the shadow cabinet?

How will Pakatan deal with that, which thus far, it has cowardly evaded the issue, such a pressing one. It's an issue that's better dealt with now, or sadly, NEVER!

Indeed, how can we expect a stable Pakatan government following GE-14 if it can't even have an agreed shadow cabinet at this stage?

Consider the MB shambles in Selangor following the idiotic Kajang Satay manoeuvre, and now picture the utter chaos of a Pakatan government deciding on the cabinet only after winning GE-14. If Pakatan can't deal with the shadow cabinet NOW, forget about being a coalition.