I heard on the grapevine, while imbibing the ‘nectar’ of its fruits wakakaka, that two F5E engines had been moved from Argentina to the Antarctic.

Apparently a fat bloke at the South Pole, who likes to dress in red, is in trouble with the RSPCA for alleged cruelty to some animals with antlers, one of which has a big red nose.

The RSPCA claimed Fattie had subjected those strange animals with enormous loads around this time of the year for the last several decades. They weren't able to nab him before because he has been changing address from South Pole to North Pole and then back, and to and fro, so on so forth.

They've finally succeeded, that is, in apprehending him. The animals have been taken away to a vet for examination, but Fattie is out on bail, claiming he has a vital ‘schedule’ to keep (it seems tonight) or he will suffer loss of reputation ... yadda yadda.

Anyway, being the innovative type, the impounding of his animals by RSPCA has not fazed him in the least. Bloke purchased the 2 F5E engines to fit on his sleigh. 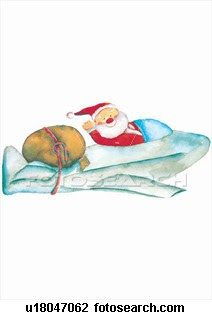 However his missus told him it won’t be brilliant at all to visit Malaysia at this point in time with his reconfigured transportation. I heard he's likely to give the Peninsula a miss, but will still keep the date with Sabah and Sarawak.

So if Malaysian parents have a hard time tomorrow explaining to their lil’ sweet ones why their stockings aren’t filled, I suggest they dob in a local bloke by the name of Zahidi.

Wishing you all a happy and foolproof Christmas & a Safe New Year.