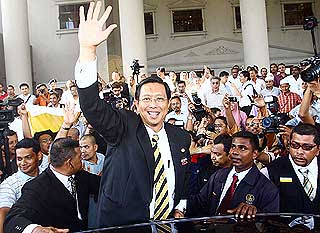 Justice Abdul Aziz Abd Rahim of the KL High Court ruled that good olde Nizar Jamaluddin is the rightful Perak MB, stating "He is, and was, at all material times the chief minister of Perak." ;-)

And MB Nizar correctly declared that the calling of the May 7 sitting was invalid, wakakaka, which effectively means Sivakumar is still the Speaker, whose ruling must be obeyed, full f* stop.

R Ganesan like Zambry, pretenders, reverts to what he is, just a pretender-speaker with no real power other than as an ordinary ADUN.

Ganesan has a f* nerve to state that the BN bloc can call for an emergency sitting where a motion of no-confidence can be moved against Nizar, indicating its 3 ADUN majority can win the game.

With the May 7 assembly ruled by MB Nizar as invalid, Sivakumar remains as the Speaker, and he will demand that those 3 clowns including the most despised running dog [female, I won't use that word ;-)], are no more. Don't forget that Zambry plus company have been suspended for 6 months.

Though I fear the BN machinery will crank out some other form of mischief I believe Najib has had a bellyful of one-ups-manship. It may be the face-saving exit from a political minefield that he has been looking for.

He can now tell his UMNO rightwing element with a straight face that he has to abide by the High Court's decision while sighing a sigh of relief that the poisonous Perak debacle can now be laid away to rest, instead of its potentially cancerous growth for BN right into 2013.

I also want to see a Night of the Long Knives (purge) for the staff of the DUN who had adopted a pariah partisan political stand against the lawful MB and lawful Speaker. There's something to be said about the American political system and how it affects their administrative staff when there's a change of government.

Nizar is now seeking an audience with the Regent to dissolve the State Parliament. I await eagerly to see what the Regent will say, whether it's man man lai or otherwise, because in this, HRH will determine the future of the Perak royal family vis-à-vis Perakians.

And let's be thankful his dad has the commonsense to stay away.

And who the f* cares that PPP's Murugiah gets 'bullet' warning wakakaka!