Look at the following photograph and have a glimpse of why Indian Malaysians have so many problems. Doesn’t matter who that bloke is, as his person, his individuality, his identity are all not important. 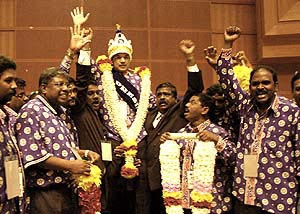 It’s the act of his followers, a display of a combination of adulation, hero-worship, and bodek-ism. Bloke even has a crown – so the (previous) King is dead, OK, long live the (current) King wakakaka.

When Hindraf Uthayamukar was released, he not only received the same sort of reception, full of adulation and idol-worship, but he had to stop people from kissing his feet, the ultimate act of subservience, an act rightfully reserved only for one’s parents and more senior members of the family (like granddad).

Once I saw an Indian colleague demanding of a student (Indian of course) who was the son of a friend of a friend to kiss his feet – it made me sick.

Then we have people rushing to get a snip of Uthayakumar’s hair or beard when he shaved those off. 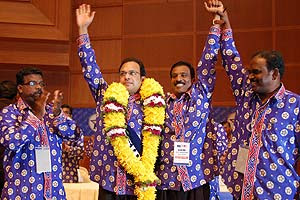 And we sure know who MGR was, don’t we, and how he was virtually ‘God’ to the Tamils.

Now we have the new political idol of India, Rahul Gandhi, who at a mere 38 is being ‘promoted’ in a personality campaign to succeed 76-year old PM Manmohan Singh, in just 2 years time, all because he carries the Gandhi name.

Manmohan is expected to step down in that time so that the son of Rajiv Gandhi, the grandson of Indira Gandhi and the great-grandson of Jawarhalal Nehru can become PM of India. Whether Rahul is of good enough material to be PM is totally irrelevant.

Don’t laugh because this over-the-top adulation, hero-worship or bodek-ism have spread across to the Malays.

I could be wrong but I suspect the feudalistic obsequiousness could be (Hindu) caste-culture inspired. Indonesians, Thais, Cambodians, Burmese, Laotian who all adopted and share the Hindu culture-religion have the same inclination.

The garlands and corsages have been getting bigger and bigger in direct proportion to the social-political status of the idol, until with a person like, say, Dr Mahathir at the height of his powers, it’s a wonder the garland bestowed upon him by some supporters didn’t require the hoisting mechanism of a crane to place same around the former PM’s neck, and with a safety team of orthopaedist, chiropractor, osteopath, nurses standing by just in case.

And if you had been observant you might have seen Adam and Eve and dozens of animals wandering around in that Garden of Eden pinned on the front of his jacket pocket.

I heard grateful florists in Malaysia also worshipped him as their patron saint ;-)

But these shows have been totally ridiculous and stupid. Why do those people have to descend to such sycophantic obsequious bodek-ism. Makes me cringe with embarrassment.

Time for the Indians to wake up.