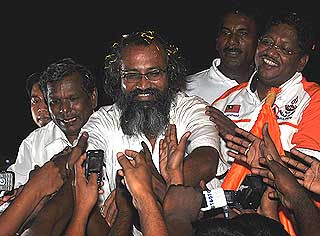 kaytee is happy Uthayakumar has been released from the clutches of the draconian ISA. I have been very sympathetic and supportive of Hindraf right at the very beginning, when Hindraf wasn’t then fashionable ;-)

I even attempted an ode to Hindraf which I posted as 25 November 2007.

Uthayakumar has become a hero to many Malaysians and not just Indians, which is a reflection of our admiration for his courageous endurance and unchanging stand to struggle for the uplifting of his poor kinfolk.

But as we know, there’s a season for everything, and even Hindraf is subjected to this universal nature.

Therefore I would advise Uthayakumar and his brother Waythamoorthy to consider that Hindraf as a Hindu movement may have outlived its usefulness.

For continued relevance, it must now transform or metamorphose into a human rights or even political movement for the downtrodden of every Malaysian, and not just Hindu Indian Malaysians.

To be quite frank, I haven’t also been impressed by Uthayakumar’s statement in Malaysiakini that “There is a joke that the Chinese want to form Chindraf and Jemaah Islamiah may form Jindraf - people are riding on Hindraf’s popularity.”

I hope he was only joking but if he wasn’t, let me assure him that Chinese Malaysians in general aren't interested in a solely-Chinese Chinraf. My dear Uthaya, race-based politics is so passé ler. Even the racists shy away from being labelled as such wakakaka!

Besides, it would be self defeating and the height of hypocrisy for Chinese to condemn UMNO while fantasizing about a Chinraf.

And the reality is Chinese Malaysians aren’t so enamoured with street protests and braving chemical-laced 'rain' (Tian Chua excepted). Mind you, they would use the ballot box cleverly, which after all is their legitimate and democratic right to exercise, which they had done powerfully so!

If Uthayakumar had laughed at the recent formation of another Indian-based party, Mindraf, then I wonder how he could at the same time talk about turning Hindraf into a political party.

Look at MIC, the biggest Indian party there is/was in Malaya/Malaysia. Ask yourself what power did they actually wield for Indian Malaysians in the last 50 years?

Yes, one can argue that the problem was in their leaders being corrupt, compliant and cringing, so OK, allow for those negaive traits, and then tell me what had been MIC's real bargaining power vis-à-vis UMNO?

Do you think Manoharan could have won that seat with 70% of the votes against a Gerakan Chinese bloke if he was representing only Hindus?

OK, perhaps yes, certainly in March 2008 I concede anyone could have won easily so long as he/she wasn’t BN. But just how long do you think a Hindu-based party will fare against a BN in the years to come, say in the same constituency we have just used as a model?

The answer is clear that if Uthayakumar is interested in helping his economically and socially marginalized kinfolk through a more active role in politics, then he should take his followers into one of the big political multi-racial parties.

I would recommend DAP but then ;-) I suppose I’m biased.

But seriously, Uthayakumar should examine how DAP has junjung tinggi (hold high in respect) members such as Karpal Singh (plus sons), Prof Rama, Kulasegaran, Sivakumar, Manoharan, etc. Look at the history of the DAP which had people like Devan Nair, Patto, Peter Dason!