Death of democracy in Perak - when silence is betrayal! 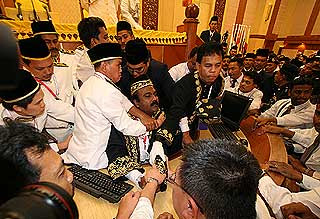 Nothing is more deplorable, disgraceful and deceitful in a democracy than in witnessing unidentified outsiders (BN thugs) entering the Perak State Parliament to drag out the Speaker of the House.

It was a murder of democracy in public.

And worse, according to The Malaysian Insider Sivakumar was taken by Police and confined in a room for an hour, while the pretender seized his position.

WTF did the Police think they were doing in detaining an ADUN who is also the de jure Speaker of the Perak State Assembly? Another stab in the belly of parliament!

But what astonished me more has been the Sultan’s representative, Raja Nazrin, presiding over the opening of an illegal parliamentary session, lending that assembly an unjustified and unwarranted legitimacy.

And one may ask, why did HRH wait until Sivakumar was dragged out and replaced by the BN appointed speaker before he made the royal address? 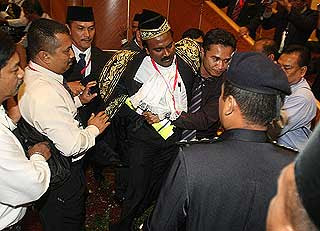 The Sultan should have listened to the voice of the people and dissolved the State parliament weeks ago, instead of allowing the so-called august House to degenerate into the fumbling farcical f*up folly it became today – a black day in the history of highly oxidised Perak, bloody blooming black silver.

I blame 3 parties for allowing politics to deteriorate to today's sad state where we witnessed mind-boggling monkeying in the Monkey House of Perak, namely:

(1) Anwar Ibrahim for starting the f* undemocratic frog business, having even the shameless temerity to describe revolving door frog, Nasarudin Hashim’s defection as reflecting “... the sentiments of his voters, namely the Malays in his constituency ... as the beginning of a new wave.”.

Yes, Mr Man Man Lai was not only hard up for frogs but he had to single out Nasarudin’s defection as that of a new wave of Malay voters tsunami-ing over to his banner.

(2) Najib for responding to Anwar’s froggie poker, by upping the ante. He could have put a stop to the Perak nonsense once he has secured his UMNO presidential position, but alas, he didn’t have the will to close the lid back on Pandora Box quickly enough.

He has allowed democracy to be mauled, savaged and mutilated to an extent that we saw thugs being used by the BN to drag the legitimate Speaker out of the House and held incommunicado by police for an hour so that a pretender could usurp Sivakumar’s position.

The wounds suffered by democracy in Perak on this day of infamy will take decades to heal.

(3) HRH – what more can I say that’s not already said about him. Ironically once one of the most admired man in our nation, one now has second thoughts about him.

Why has his representative seen fit to deliver the royal address to an illegally convened State Assembly, one presided by a pretender-Speaker?

Former Justice NH Chan has written volumes on HRH’s hubristic show of pretend-power, his unconstitutional dismissal of MB Nizar (a view supported by many including Tun Dr Mahathir), and his shocking lack of judgement in seeing Najib behind Nizar’s back on the crucial issue of who commands the confidence of the majority in the State Assembly.

I would not be very far wrong in saying his actions might have lent belief to the BN that its grubby grim grab for power has been legitimate.

But sadly, in the weeks that followed the BN coup d’état, despite many imploring HRH to send the decision back to the people of Perak, he remained silent, ignoring the voices of the rakyat.

And perhaps we should all recall Martin Luther King's words that "A time comes when silence is betrayal."

both photos from Malaysiakini