Can one of you help identify this place from the very old photo, one in a batch depicting Penang in 1932?

Friend of mine said his uncle came across the photo in one of those email chain letters. He sent it to me for help, but much as I pride myself as a Penangite, I wasn't able to.

The caption of the photo claimed it was the Penang Alexandre Hotel. 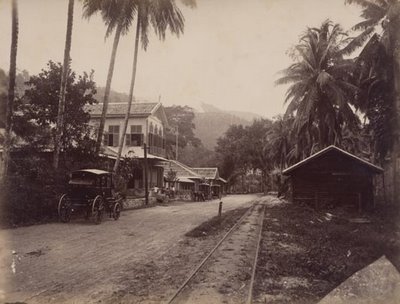 I suppose the hotel would be the double-storey building on the left. Could the hills behind it be Penang Hill (Bukit Bendera). I doubt there would be any hotel in the southern end of the island in 1932, so we may rule out Western Hill.

Next to the hotel, further away in the photo, there seems to be a building with a flag post. It looks like a school, administrative building or a police station.

Then the most intriguing feature appears to be the rail tracks. It couldn't have been the Penang tram lines because the photo doesn't show any electrical grid overhead. If those tracks were for a train, which part of Penang Island had a train line? Maybe in 1932, it might have been a tram pulled by horses?

Or have my friend and I been foxed by our presumption this scene was on the island when it could well have been in Province Wellesley (Seberang Perai)?

Can you kind Penangites and former ones please ask your dads, granddads or elderly uncles or neighbours? Thanks.