Bananas 2 - The man who hates bananas

Continuing from my previous post Bananas where I wrote:

The sins of a non-Chinese educated Chinese must be exposed and punished, not unlike what someone (who knows, maybe a kinfolk of the Jiang Qing-ish headmistress) has been doing to Lim Kit Siang, Lim Guan Eng, Hannah Yeo and most of all, Josh Hong wakakaka.

Bananas must have their ‘yellow’ skins peeled back to expose their ‘white’ and thus non-Chinese core ........

I narrated how I became a banana when I could have well turned out to be either an amazing Teochew (Chaozhou) opera star, or alternatively I could have become a world renowned Chinese scholar famous for his love poems wakakaka.

And I did also threaten to reveal how a banana-hater woo-ed and stole my banana sweetheart from me. But before I come to that sly sneaky (but sweet to her) dog, maybe I need to share with you my thoughts on what is a banana because there exist several views on this quite common species of Chinese Malaysians.

Yellow on the outside means we’re Chinese but white on the inside, implies western (English) education, western values and even western habits. From here, further descriptions begin to vary, where those which blogger Shuzheng has adopted reach outrageous dimensions, alleging that bananas are all too ready to or even have disowned their Chinese heritage.

In a letter to Malaysiakini, Shuzheng accused Lim Kit Siang of wanting to “emasculate the Chinese identity and then subvert it by the replacement, 'Malaysian'” as in DAP’s Malaysian First concept. He then condemned Lim as someone who has jiancao chugen.

The Chinese proverb literally translates into ‘cut the grass by severing its roots’, asserting if one does so, the grass will sprout no more; it means destroying something totally and thoroughly by eliminating any of its potential for comeback.

Shuzheng used the proverb to lambast Lim for turning against his ancestral past.

Does Shuzheng make sense here, or has he allowed his invincible bias against DAP leaders who are Chinese, western educated and Christians, especially those of the sweet gender who have the brazen shame to marry a non-Chinese, and worst of all, if she is at the same time a sweet smart cutie wakakaka, to indulge in such histrionics?

Let’s see where my personal experience as a banana has taken me.

One morning, a few years after I left for good the private Chinese school because of the Jiang Qin-ish headmistress, I met sweet Dimpled Cheeks in Paya Terubong – she was then thirteen, 2 years younger than me. More gorgeous than ever, she was unfortunately accompanied by her parents, obviously a Sunday family outing to the Ayer Itam village market.

I thought her dimpled cheeks grew more rosy, probably flushing on seeing me, the dungu for whom she wrote those sweet innocent words, mind you, just to improve my Mandarin ;-) I suppose she must have regretted her sweet innocent impetuosity.

At that particular moment three short lines from Li Bai’s Changgan Song sprang to my mind:

At fifteen, my face lit up
in your company, I was willing
to have my ashes mixed with yours 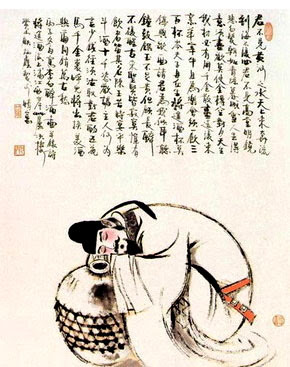 Li Bai was China’s greatest poet and a Godzilla boozer. For years, under the influence of one of my uncles, I tried to imitate Li Bai’s lifestyle (the boozing part) until I found out he drowned in a vat of wine. Mind you, it was not a bad way to go wakakaka.

Of course I couldn’t read much Chinese save a few words, like those three which Dimpled Cheeks wrote for me ;-), but I could learn/absorb Chinese tradition, culture, myths and folklore and history from my elders. Being banana was never a socio-cultural disadvantage though of course we can always do better.

An uncle was good enough to buy me the English versions of the 300 Poems of Tang Dynasty and various other classics, including the Big Four – Romance of the 3 Kingdoms, Water Margin, Journey to the West and Dreams of the Red Chamber. But damn, Unc refused to let me have a copy of the Plum in the Golden Vase because I was then not yet an adult :( 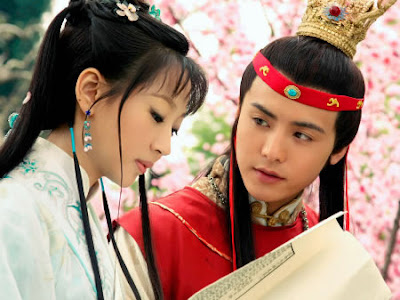 Dreams of the Red Chamber

Though I struggle somewhat with Mandarin, I speak other forms of Chinese, Hokkien and Teochew, and some naughty-saucy Canto words, and gasp occasionally Mandarin too - so, how to 'emasculate' the Chinese identity?

I observe Chinese festivals, and at mum’s insistence (just to please her when she was alive) religious or traditional rites.

For example, I celebrate mid Autumn festival, CNY, Chap Goh Meh, and all the festivals that Penangites love, and even (for moi, an atheist) religious ones like 7th Moon (Ghost) festival and its saucy Koe Tai (Ge Dai) wakakaka, the very stern Kew Ong Eah birthday rites and the trek up cheng ji chan (1,200 steps) to the 9-Emperor Gods’ temple on the hill, various Tua Peh Kong birthday celebrations in Penang and the inevitable Teochew operas.

When I was in Malaya, I observed (together with my mum while she was alive) Cheng Beng, visiting and cleaning my grandparents’ and father’s grave. In Penang, one cannot but help know when Cheng Beng arrives because the Angsana blooms would be scattered all along Scotland Road and Western Road. The Angsana trees (Pterocarpus indicus) are known as pokok sena in Malay. Penangites called the magnificent golden blooms Cheng Beng hua or flowers of Cheng Beng. The name also carries an ominous significance as the blooms on the roads during or after rain had proven to be perilously slippery to motorcyclists, like kaytee in his younger days.

I have no doubt Lim Kit Siang and his son and families (notwithstanding their Christian faith) observe and celebrate at least the non-religious Chinese customs, culture and traditions as well. So how dare Shuzheng make such outrageous MCA-Gerakan-ish claims that Lim Kit Siang has deliberately destroyed his Chinese roots and heritage?

Mind you, I can tell you why he did so. Shuzheng has been fond of putting words (of his slanted choosing and perception) into the mouths of his various Nemesis’s. He also does this by grasping on flimsy straws and extrapolating them along the gutter-route of his prejudice. That is his weakness, borne by his illiberality, twisted animosity and lazy scholarship.

He hates Lim and son so much that he has even turned his take on Teoh Beng Hock’s so-called ‘final note’, a document of questionable provenance, into a blame game, of course with Lim Kit Siang as a target – that’s his sickness but in doing so, he may have, either unwittingly or deliberately, given the MACC comfort.

I was prepared to accept his bilious eccentricities in attacking Christian Chinese DAP leaders as just a bias, but in exploiting the tragedy of a young man for his own base motives, Shuzheng has crossed the last line of decency. His talent in penmanship has degenerated into vindictive malicious pomposity.

Yes, I know a few Chinese educated may sneer at or look down on bananas, but none has ever shown the degree of hatred and the guttersnipe tactics as Shuzheng has done to Lim KS, GE, Hannah Yeoh and other Christian Chinese DAP leaders, and Josh Hong.

F* Shuzheng, let’s return to someone pleasant, like my memories of sweet Dimpled Cheeks. I thought of her at the market, then a sweet 13. If I could turn the clock back to then, I would dedicate 3 of Du Mu’s lines on Parting to her:

In my next posting I’ll talk of my banana love, and how Lee Lam Thye (yes, the former DAP pollie whom many of you hate) ‘introduced’ us, not that Tan Sri Lee even knows about that wakakaka.
Posted by KTemoc at 7:35 pm