As always, sweetie Helen Ang has written a great reading piece in Malaysiakini titled Little red dots and blind spots where she demolished Dr Mahathir’s claim that the country was at risk of being overrun by the local Yellow Peril.

She validated good olde wise Confucius' adage that a picture is worth a thousand words by illustrating via a image taken from the blogsite of Sharifuddin A Latiff the paucity of Chinese Malaysians among the top echelon of Malaysian civil and military servants. 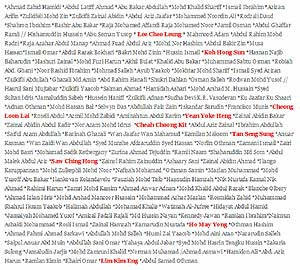 Sharifuddin’s image (above) was a slap in the face for the dodgy postulation of Perkasa ultra Ibrahim Ali – many suspect his bigoted scare campaign has the covert backing of UMNO or/and even Dr Mahathir.

Perkasa’s aim and indeed those of other UMNO mouthpieces like Utusan, Berita Harian, Najib’s former aide (the one who said Indians are beggars and Chinese women are hookers), and occasionally the top UMNO guns like Dr M and Muhyiddin, have been to marshal the support of the heartland back to UMNO. Fear is a wonderful motivator, though of course we know the consequences of crying ‘wolf’ too often.

However, much as I love sweetie Helen, I disagree with her on several points in her most readable article.

First is her criticism of Lim Guan Eng. Sweetie slammed Lim for his cakap ta’serupa bikin (no walk de talk lah) as shown in his “… appointment of Mohd Fairus Khairuddin as deputy chief minister – who has since been ousted – smacks of the very same communal approach Lim claims to reject. The incompetent, inexperienced Fairus was given the job for no other reason than he is Malay and to fill the PKR quota.”

Either the darling girl is politically very naïve or ….. quite frankly matey ..... I’m not sure what Helen wants, to wit, ..... who Lim ought to have appointed as DCM in order to avoid accusation of being communal?

There is of course Dr Rama as another DCM – now, would this too be communal, over-favouring the Indians?

The reality is that DAP didn’t alone capture the Penang state in the March 2008 general election. It did so in collaboration with PKR and to a lesser extent, PAS. Surely, sweetheart has heard of ‘power sharing’, where the DAP has to include PKR in its state government?

The DCM position was allocated to PKR and as to whom the party selected to fill the seat was up to PKR (Anwar effectively). And if Fairus turned out to be a dud, why blame Lim GE?

Does Helen have someone else in mind for that post?

Secondly, Helen has borrowed a sneer from blogger Shuzheng to hurl at “DAP people like Ng [who] cast the impression that they think of Muslims every moment of their waking hours”.

I could tell you a little something or more about Shuzheng. But I’ll leave most of it aside for now as I don’t want to digress (which alas I have a habit of doing so wakakaka).

I first came across Shuzheng's name and writing in the Centre for Policy Initiatives website. He ripped into me for my (attempted humorous-sarcastic) poke at Kadir Jasin who wrote an article stating he wishes to remain a Malay (rather than become a Malaysian).

Pak Kadir like Ibrahim Ali and Dr Ridhuan Tee are in the group which doesn’t want the concept of Bangsa Malaysia as that would (horror of horrors) make every Malaysian equal. They want to cling on to their Malay special privileges. I deem Ibrahim Ali, Pak Kadir and Ridhuan Tee as the 3 P’s - respectively the pseudo-pahlawan, propagandist and priest of the Ketuanan Melayu ideology.

Surprisingly I find Dr Ridhuan Tee as the sole genuine ideologist while I consider the other two as mere opportunists. If Dr Tee wants to be a Malay, well, constitutionally and by his own practice and personal preference, he is entitled to call himself one. And why should we deny him that, much as we like to tease, torment or tug his tail.

Back to Shuzheng's criticism of me - I accept that as a blogger I am liable to be flayed and I am open to that, including from Shuzheng; mind you, not that I agree with his very well written views. Alas, I don’t have time to debate them in this post. But I’ve observed that Shuzheng has an invincible bias against Christians, more so if they happen to be DAP members ;-)

But more than Christian DAP members, his bête noire is Christian Josh Hong wakakaka. I was informed by a friend that in one of his (Shezheng’s) more recent posts he grouped me together with Josh as Christians. While I consider his categorization of me with Josh Hong as an honour, I find his labelling of me as a Christian as lamentable and lazy scholarship.

According to sweetie’s article Shuzheng made a caustic remark against Lim GE’s aide Ng Wei Aik. This was what sweetie Helen wrote:

Then there is Lim's aide Ng Wei Aik who complained that Najib Razak took a full 12 hours to register his anger at Israeli commandos for boarding one of the Gaza flotilla ships. In contrast to Najib who was slow on the uptake, Ng's quick draw has been interpreted (by a writer calling himself Shuzheng) as his heart touchingly being at one with the Palestinians, and “DAP people like Ng cast the impression that they think of Muslims every moment of their waking hours”.

A crime against humanity as was the case of Israeli commandoes illegally boarding an unarmed civilian ship carrying peace activists and killing 9 of them called for unhesitating and outright condemnation. Even Israel’s normally blind ally, the USA, was horrified enough by the sickening senseless slaughter that both its President and its Secretary of State were compelled to add their unusual contributions to the global outrage.

Thus, does one (the DAP) have to “… think of Muslims every moment of their waking hours” in order to do so?

But that’s the pompous polemical style of Shuzheng. It’s not unlike Dr Mahathir’s and Ibrahim Ali’s scare campaigning of alluding the Chinese would be taking over control of Malaysia [with the armed forces, police, civil services all in Malay hands?], or another irresponsible piece of scare propaganda that Pakatan’s registration of new voters has outnumbered UMNO’s by a preposterous 40 to 1.

In stating that “DAP people like Ng cast the impression that they think of Muslims every moment of their waking hours” Shuzheng has made a disgraceful allusion to trivialise a serious condemnation of Israeli arrogant aggression.

Finally my criticism of sweetie Helen, much as I adore her, has been her adoption of the Uthayakumar Doctrine, of questioning someone’s expression of sympathy or concerns for Party A or B if they haven’t openly expressed such concerns for Indians.

Sweetheart wrote “… about a vagabond found dead in a pool of blood on a shoplot corridor in Georgetown. It was three days before last Christmas that the murder of the 68-year-old mentally unsound Indian vagrant was filmed on CCTV camera. Footage showed the assailant covering the victim's head with a plastic bag and punching him.”

Uthayakumar-ishly, she asked of the DAP: While DAP joins the Umno and PAS chorus that the Israelis must be punished, what about justice for the elderly Indian? The homeless, defenceless C. Veerasamy - who was killed in such a callous and horrifying manner - used to be a Penang municipal council road sweeper.

My dearest Helen, there have been and will be many crimes and injustice in our troubled world. There are some we have to voice our condemnation loudly and immediately while others we just have to leave to the actions of other parties to address, for example, the police. And indeed there had been and will be many others we won't even comment on, for example, the death of three 13-year old boys crushed to death by the collapsed roof of an old abandoned building in a low-cost housing scheme in Changkat Tin, Tanjung Tualang

But it doesn’t mean that we do not care.

However, we need to bear in mind that it’s not a mandatory prerequisite to express sympathies for the marginalised Indians before we may do so for others.