KUALA LUMPUR, June 23 — A technician pleaded not guilty in the Sessions Court here today to a charge of raping his girlfriend’s 13-year-old sister.

The charge, under Section 376 (1) of the Penal Code, provides a maximum imprisonment for 20 years and is liable to whipping, if found guilty.

But was the sex act consensual? Does Muhammad Syahir Naim Ramli have a "bright future"?

Now, why in the world did I ask these silly questions when a 13-year old girl was involved in the reported sexual act with Muhammad Syahir Naim Ramli?

Shouldn't it be plain straightforward that under "previously known" Malaysian law that any sex act with an underage girl must automatically be considered as statutory rape even if the lil' sweetie consented to the sex and was a most willing partner?

Well, did you note I annotated the particular Malaysian law on statutory rape as "previously known"?

It all depends on who the man is, wherein such a sex act with a 13-year old girl could be consensual sex or statutory rape.

Take for example, such a case in 2012. A maggot by the name of Noor Afizal Azizan who had sex with a lil' 13-year old girl was judged as having consensual sex with the wee sweetie - yes, 'consensual sex' with a 13-year old in the words of the judge.

It plainly showed the pathetic pariah-ish poverty of our legal system where the judges allowed the term 'consensual sex' to be employed in a case of statutory rape, in which a female minor, only 13 years of age, was well below the age required to legally consent to the act of sex.

In statutory rape cases, unlike those of forcible rape cases involving adults, there is no requirement to prove force or threat had preceded or was involved in the rape. The laws MUST automatically presume coercion, because a minor or an adult who doesn't have normal/mature mental capacity is legally incapable of giving consent to the act.

But our remarkable judges did not think so.

Additionally, we were told that Noor (perhaps like our Imperial College maths genius Nur Fitri Azmeer Nordin the paedophile pervert) was assessed as having a 'bright future'. So not guilty lah, it was 'consensual sex' in which the lil' 13-year old girl was a willing and consenting partner? 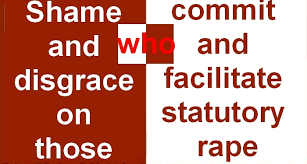 By the by, the now-defunct Malaysian Insider (TMI) reported then in its news article Rapists freed by courts match medical definition of paedophiles that the World Health Organization's International Classification of Diseases (ICD) categorizes paedophilia as ‘a sexual preference for children boys or girls or both usually of prepubertal or early pubertal age’, ...

... while the Diagnostic and Statistical Manual of Mental Disorders (DSM) used by mental health professionals globally states 'paedophilia is the sexual attraction to pubescent or pre-pubescents aged 13 or younger and the subject must be 16 or older with the child at least five years younger'.

TMI states the slimy maggot Noor fitted the medical profiles of paedophiles and that international research of paedophilia as a sexual disorder suggests that paedophiles start offending at a young age.

But many of us were totally gob-smacked by the judges' explanation in Noor Afizal's case in which the judges had dared, in a case of statutory rape, to offer the excuse that Noor Afizal did not use force and that it was consensual sex.

The Star Online reported the following:

“Paedophilia is a very serious crime and a person should therefore serve his punishment. As for his future, it is really his responsibility. I do not understand why Mara is bending over backwards to help someone, especially someone who has committed a crime this heinous,” he said, questioning the value systems of Malaysian education institutions.

“In spite of the conviction, Mara has described Nur Fitri as an ‘exemplary student’.

“Clearly, the people running Mara have a warped sense of values,” she said, adding that education was not just about excellent academic results, but also building character and instilling good moral values in students.

“He is obviously a pervert and for Mara to make excuses for his actions is totally repugnant,” she said, adding that it was obvious Nur Fitri had a serious problem and needed treatment, not a place to continue his studies.

Recently, the Mara chairman attempted to mitigate against comparison of Nur Fitri with the Pommie slug Richard Huckle, asking the public not to link Nur with Huckle.

Annuar said this when asked if MARA would stand by its decision to give Nur Fitri a second chance after Huckle’s case, which has sparked outrage in Malaysia.

"No need to link Nur Fitri to this case," the Ketereh MP told Malay Mail Online via WhatsApp.

When asked his reasons for saying so when both youths were found in possession of indecent images of children, Annuar did not elaborate, merely replying, “No”.

It would appear that despite a couple of ministers and university lecturers saying no to Mara giving notorious Nur Fitri a second chance in his academic career, the Mara establishment or chairman is yet to be persuaded from its "warped sense of values" (the very words of activist Datuk Noor Farida Ariffin) perhaps because the paedophilic pervert has been deemed by Mara as an "exemplary student".

Is Mara so hard up for academically clever but morally repugnant repulsive and reprehensible students? Indeed, what a f**king "warped sense of values"!

So we know that Noor Afizal and Nur Fitri share the same taste for lil' kids but only one has been allowed to go free because of his "bright future" whilst the other, unfortunately trapped in a different country which viewed his crimes as heinous and perverted, goes to jail.

But I suspect he may possibly be given a second chance when he is eventually freed and back here in Bolehland, because he has been deemed as an 'exemplary student'.

But the Mara chairman was resoundingly condemned for his attempt to mitigate for Nur, as reported by the MM Online as follows:

Commenting on Mara chairman Tan Sri Annuar Musa’s insistence that the two cases should not be linked, they said Nur Fitri Azmeer Nordin’s crimes were no less serious simply because he did not rape or sexually molest children.

Huckle and Nur Fitri were both convicted in the UK for the possession of child pornography.

“In both ways, you have children involved and you have extreme cases of pornography. Both have the same ingredients... both have committed a crime,” Suriana Welfare Society for Children chairman James Nayagam said.

“We cannot deny that this is a clear-cut case of a person who has violated children. We cannot say which case is different; they are all linked. Yes, very irresponsible statement.”

Voice of the Children (VOC) chairman Sharmila Sekaran argued that Nur Fitri’s action was still a form of sexual abuse towards children and noted that he possessed depraved images of child pornography prior to his arrest last year.

Nur Fitri was last year found with over 30,000 videos and photographs of child pornography that London police described as “some of the most extreme” materials they have ever seen.

Sharmila said the offence was heinous given that the images were in the worst category of child pornography — those depicting sexual acts — and should be viewed with the appropriate gravity.

“It is splitting hairs. One person rapes; another person watches the rape, keeping a record of it for repeated viewing. It’s still wrong and rightly an offence!” she told Malay Mail Online.

But not everyone enjoys a "bright future" like that slimy slug Noor Afizal Azizan.

Around the same time as Noor and his remarkable miraculous mind-boggling enjoyment of an unpreedented Malaysian legal precedent of 'consensual sex' with a 13-year old lil' girl, another maggot by the name of Chuah Guan Jui also bonked an underage lil' girl.

Thank goodness for commonsense and common law, Chuah was jailed for 5.5 years after public outcry over the initial moronic court ruling (due to stare decisis set by Noor's case) and consequently a successful appeal by the prosecutor. The f* maggot deserved it.

But what about the bloke with the 'bright future'? Surely what's good for the goose (Chuah Guan Jiu) should be good for the gander (Noor Afizal). Why was Chuah jailed but not Noor? 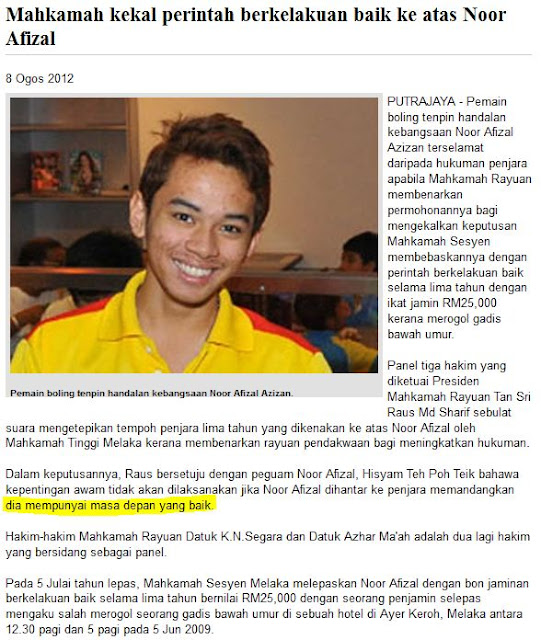 I really like to know who are Noor's parents?

I wonder whether Noor is still representing the states or the nation with his bowling ball with which he managed to brilliantly strike down all the judges? Chuah Guan Jui should have taken up bowling.

Anyway, our current accused Muhammad Syahir Naim Ramli bloody well come up with at least one of the following reasons:

(a) he must have a "bright future", like bowling or being good at maths

(b) claim the 13-year old consented to the sex.

Again I wonder who his parents are?

And now a word from Ridhuan Tee 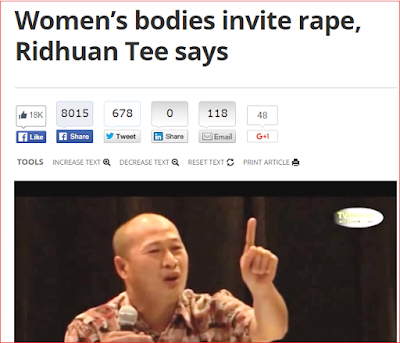