Two days ago I posted Indon dangerous game in regards to Indon jet fighters based recently at Natuna Islands interfering with our air force C130 flight from KL to Labuan, a flight schedule which has been going on for donkey years, since the RMAF was flying the British-produced Dart Herald transport aeroplane, the predecessor to the US-produced C130H.

The Dart Herald with its shorter range was routed from KL to Labuan via Kuching, and back. The schedules between the two wings of our nation have been ongoing for more than 50 years.

Today FMT reported that Jakarta wants apology over ‘intercepted’ aircraft in which it was said that Indon Defence Minister Ryamizard Ryacudu told the Jakarta Post: “I have in person asked the Malaysian defence minister to apologise” for the RMAF C130H aeroplane flying over Indon territory.

Now, either the Indon Def Min is clueless about the treaty signed long ago by both Indon and Malaysia, which in return for Malaysia recognizing Indon's archipelago territorial concept, accepts that Malaysia has the right of continuous, expeditious and unobstructed overflight through the airspace over territorial waters between east and west Malaysia, or he has been bullshitting his own media for domestic consumption as to siapa jaguh.

As I had penned earlier, the Indons locating fighter jets on Natuna Island recently have been an over-the-top belligerent response to intrusions of Chinese fishing boats into Indon territorial or EEZ fishing waters in the South China Sea, but done as a consequence of Indon President Joko Widodo ordering the Indon military to increase its presence at Natuna. 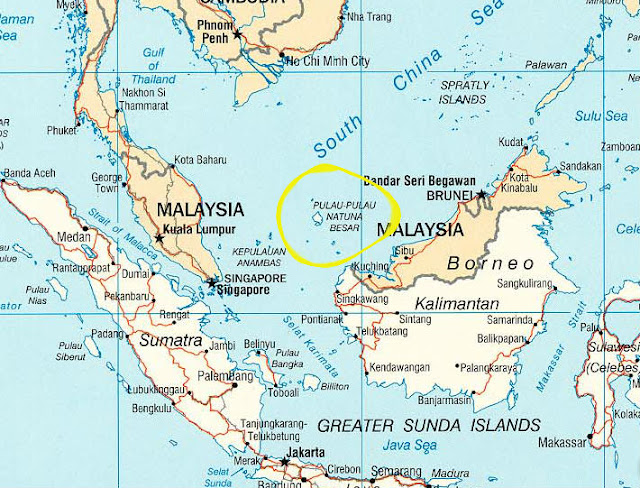 Widodo wanted to show a domestic audience that he's a real tough guy. In this he's no different to a succession of recent Australian PM who too showed and is still showing to Australian voters how tough each had/has been, and will be especially in denying illegal migrant boats from landing in Australian territories.

But Widodo is sinisterly unique (different to Australian PMs) in that his tough guy image has initially been built up from his shameful serial executions of criminals at a time when most of the world are gradually turning away from capital punishment. Even the supposedly more draconian President Suharto in his time did not succumb to the wicked temptation of executing criminal prisoners.

Thus at their president's orders, the buildup Indon military activities have invariably and inevitably led to include nonsensical and illegal interference with a friendly neighbour's military schedule flights between east and west Malaysia, which have been going on approximately the last 50 years and which have been sanctioned under a bilateral treaty.

Yes sir, bisa diatur dan segala2nya telah diberes bapak, so steroid-ed adrenalines have been flowing in the Indon military's blood arteries as rapid as the Ayung River in Bali, in those military's amateurish eagerness to bodek their Bapak President kau kau.

But let's leave the Indons alone as that's their nature. We should be thankful their air force cap-3-kepala flying (my Malaysian arrogance, wakakaka) didn't lead to any air accidents.

What riles me most of all is not so much the Indon Def Minister's flabbergasting demands, flabbergasting to Malaysians but music to Indons a la Widodo's tough guy image, but the anti Malaysia diatribes, jeers and insults issued by our own side against the Malaysian Def Min, Hishamuddin.

'Twas obvious they, so-called Malaysians, believe in the Indon Def Min, a foreigner but not in our own Def Min, a Malaysian.

While I understand why many Malaysians have been sick of BN ministers, and still are (after all, I'm a DAP supporter), they need to think intelligently on each separate issue as to which side is actually correct. Don't moronically ABU everything, not when the interests of our own Malaysia is being pitted against those of a foreign country, one whose minister has been grossly incorrect in his belief and demands.

Indeed I commented at FMT that it grieves me to see many Malaysians or so-called Malaysians (with a couple of notable exceptions) badmouthing our own side when it's obvious the Indon Def Minister has been preposterously talking nonsense.

Such is the f**king poisonous state of our politics that so-called Malaysians are happy for Indons to bully and talk down on our own minister when Hishammuddin has been actually right.

And if Hisham has been right, then he is right regardless of whether he's a BN minister.

Those shameful so-called Malaysians should live under the Indons and realize how fortunate they are to be Malaysians, even with a corrupt BN government. They would soon realize the word 'corruption' had been invented and well practised and mastered by Indons. Indons are actually clamouring to live in Malaysia as Malaysians, and many already have.

But as the late Indon Foreign Minister, the erudite Bapak Ali Alatas, one of modern Indon's most famous sons, had once said (words to the effect): "Malaysians are arrogant to Indons but Indons are jealous of them."

And the arrogance of our so-called Malaysians have prevented them from looking at themselves in the mirror as to when they are wrong.

More importantly, they should also look into their hearts as to whether they're really Malaysians.