I lack confidence in Malaysian courts

Blogger Vivian Lee has been jailed for six months by the Kuala Lumpur Sessions Court after being convicted under the Sedition Act 1948.

Lee was convicted for a Ramadan greeting where she and her then boyfriend Alvin Tan told Muslims to break fast with pork (Bak Kut Teh), according to Bernama.

The sentence was passed down by Sessions Court judge Abdul Rashid Daud who said it is to serve as a deterrent.

In the readers' comments section, a reader wrote "Low Yat phone thief only got 4 months, she got 6 months. Brutal."

Firstly, Vivian Lee and her erstwhile boyfriend had been unnecessarily vile and offensive, but does she deserved 6 months for a moronic offensively insensitive joke or insult?

Was her bah-kut-teh Ramadan stupidity any worse than the vile offence of placing a cowhead in front of a Hindu temple in Shah Alam? Or Ustaz Ann Wan Seng's equally vile and seditious offence for doing worse in insulting Chinese Malaysians on their religious deities? 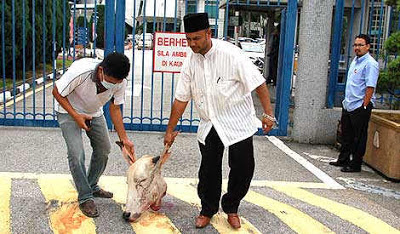 Secondly, I can't confirm whether the 4 months sentence received by Shahrul Anuar Abdul Aziz for the alleged theft of a mobile phone from a shop at Low Yat Plaza is correct as his trial was to have reached a decision on 24 May, 3 days ago - I don't know what's the outcome; can anyone help?

Anyway, leaving that aside for a minute, I had hope there won't be a racial analysis of this sentence (for a Chinese sweetie) versus the one said to have been handed down to the alleged Low Yat phone-thief (a Malay), because I want to bring your attention to another case involving a Malay man.

More than 6 years ago I posted 5 years jail for RM70 theft in which I wrote about an unemployed man Zulhaidi Hamzah being sentenced by the Magistrates Court in JB to 5 years jail for stealing 11 cans of beer worth RM70 from a mini mart in Pasir Gudang. - for more, read Star Online news Jobless man gets 5yrs for stealing some beer.

He was charged under Section 380 of the Penal Code for theft, which carries a maximum 10 years’ jail or fine upon conviction. The loot apparently was 4 cans of Guinness Stout and 7 cans of Tiger Beer. For stealing a mere 11 cans of beer, he was sentenced to 50% of the max jail term, that was, 5 years.

Now, compare that to the Low Yat case, that is, if he was found guilty and the said 4 months has correctly been the sentence handed down. Both have been Malay.

I believe the alleged Low Yat robber Shahrul Anuar was also found guilty of drug possession (methamphetamine) and fined RM2000 - compare this with the 5 years for theft of 11 cans of beer that Zulhaidi Hamzah was given.

Additionally, Shahrul Anuar (Low Yat bloke) and his mate Muhammad Shameer have been charged for wounding Hafizuddin Hamzah, 27, with a machete, in front of the Mizan Racing Tuned workshop in Jalan Jelatek on Feb 20.

Shahrul Anuar certainly has quite a CV.

But back to the case 5 years ago, namely, Zulhaidi Hamzah being sentenced by the Magistrates Court in JB to 5 years jail for stealing 11 cans of beer worth RM70.

In any language, that sentence was undeniably an over-the-top heavy handed judgement by the Yang Ariff. It’s monstrously out of proportion to the seriousness of the crime, more so when you consider heavier shit being committed by 'heavy metal' ar$eh#les in this country, none of whom has thus far been found guilty.

But I suppose Zulhaidi ought to be at least grateful for not being slapped with an additional whipping sentence by the Syariah Court for the haram items.

To further compound my already poor impression of the law, let us recall a couple of statutory rapes of 13 and 12 years old lil girls. Both statutory rapes occurred around the same period in time. This time I'm afraid I can't avoid the racial implications.

The two slugs, Noor Afizal and Chuah Guan Jiu, obviously shared the same taste for underaged girls, did it to them, and were charged under Section 376(1) of the Penal Code where they faced up to 20 years' jail and whipping.

For raping little girls, did they get any fraction of the max sentence or whipping?

Yes for maggot Chuah, who was jailed for 5.5 years, but only a mere 6 months more than Zulhaidi Hamzah for stealing less than a dozen cans of beer.

Noor Afizal? Well, the Appeal Court judges believed he has a 'bright future' as a national bowler and was let off by the hook. Yes, those judges had dared, in a case of statutory rape, to offer the excuse that Noor Afizal did not use force and that it was consensual sex.

Will we be stuck with and suffer from stare decisis (the law of precedence) offered by the judges' ruling?

I wonder whether the slug known as Noor Afizal is still representing the states or even the nation with his bowling ball with which he managed to brilliantly strike down the judges?

Don't blame me for not being at all confident in Malaysian laws and its courts.

By the way I wonder how's Tan Sri Abdul Rahim Thamby Chik? Haven't heard of him for a while!