Yesterday Mahathir was reported by Malaysiakini as saying Musa Hitam was his 1st failure. He said:

"My first failure was Musa Hitam himself. He could not wait for me to retire." 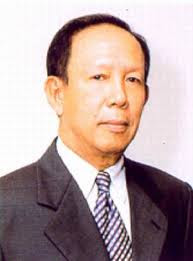 "So he resigned after five years being with me as my deputy, in a government his boys called the MM government."

Before we analyse his statement we need to know or put his statement on Musa Hitam in context - Mahathir has said so because Musa Hitam had earlier commented that Mahathir himself was responsible for the failure of his (Mahathir's) own Wawasan 2020 because he (Mahathir) had gotten rid of any potential good leaders in UMNO and surrounded himself with 'followers' or yes-men (and women).

Musa Hitam had stated “It is ironical that Mahathir’s vision is now certain to fail because of Mahathir himself."

"Brilliant as he was, he forgot that in order to succeed, he needed to train leaders at all levels - but most importantly, political leaders."

"But his personal leadership record shows that he did away with all potential leaders, one by one and in groups, and retained and trained followers."

That context explains why Mahathir has claimed Musa as his 1st failure. Mr Perfect who-can-do-no-wrong couldn't tolerate any criticism of, or in the case of AAB, any disagreement with him, thus substantiating Musa Hitam's criticism of him, wakakaka.

If Mahathir ever ever admit he was wrong, it's usually a sarcasm or reverse psychology, something that would have work out in his favour. This would probably be the case now, where he wants to discredit Musa Hitam as a/his 'failure' for criticising him as the one responsible for the failure of Wawasan 2020.

But in general, you can virtually bet he won't accept he had been wrong.

As for his acerbic and needless comment on Musa, to wit, ... as my deputy, in a government his boys called the MM government ... it was once said (perhaps by allahyarham Tunku writing in his Star newspaper?) that Mahathir couldn't stand those words which described his government as the '2M' or MM government.

Yes indeed, Mahathir just couldn't tolerate any such description which had the outrageous temerity to share his leadership in his administration with his deputy, virtually robbing him of sole command, wakakaka.

Back to analysing his statement on Musa as being impatient, don't we think that Musa was honorable (rather than impatient) in his resignation when he discovered Mahathir only wanted yes-men and not a thinker like Musa HItam? Did Musa behave like what Mahathir is doing now, an ex-PM who still wants to control the PM, for the PM to report to him regularly, an ex-PM who destroyed AAB's PM-ship and who now wants to do likewise against Najib?

Both Mahathir and Musa were known in the late '60's as UMNO's Young Turks or 'ultras', the twin enfant terrible, widely feared by the non's. I've always wondered (and had written of this complex) whether their individual mixed parentage had compelled them to act more strongly and audaciously as 'ultra-nationalistic Melayu' than someone born of full Malay parentage, and in the process gaining the notoriety of being ultras, as if to prove to the Heartland of their full grade worthiness as Melayu a la RTA (wakakaka)?

After Tunku sacked Mahathir from UMNO (and nearly jailed him), Musa took a hiatus or rather cabut-ed, wakakaka, to the UK where he did his Master's at the Uni of Surrey. He returned to UMNO mainstream when Razak deposed of and took over from Tunku as PM.

For the alleged Malay or UMNO ultra that he was accused of being, Musa was in reality quite charming and in many ways anglophilic in his behaviour and speech. My uncle (in the military then) and many others met him once in Sibu when he was on the pre-election campaign trail (as part of the '2M' wakakaka ruling party).

He shook hands with my Unc, smiled charmingly and remarked rather apologetically (perhaps for making them received him at the airport) and urbanely in English: "'Tis the season",

Those were words from a line first coined by Thomas Oliphant in 1862. Musa of course meant it was the season for political campaign as different from Oliphant's meaning, wakakaka, but it did show his anglophilic mannerism.

It was said that among the UMNO Young Turks who criticised Tunku for Perikatan (BN's predecessor) losing its 2/3 majority and a couple of states, Tunku preferred Musa Hitam over Mahathir, whom he detested greatly.

Anyway, and as to be expected, wakakaka, RPK has come up with his take on Mahathir's real "1st failure" in his latest post Mahathir's 1st failure was in 1969 in which he wrote (extracts only):

Anyway, Musa was not Dr Mahathir’s first failure. His first failure was in 1969. Dr Mahathir made the mistake of telling the Chinese that he did not need their votes and that he could win the general election with just the Malay votes.

And because he was so angry with the Chinese, Dr Mahathir started attacking the Chinese and accused them of stealing the wealth of the country. He also attacked Tunku Abdul Rahman and called him a Chinese lover. Dr Mahathir accused the Tunku of giving in to the Chinese, who had become too arrogant because of that.

Comment: I've to agree with RPK on this. We all know that Mahathir had from time to time condemned the Chinese (probably having never gotten over their votes against him in 1969), in fact even in 2013 post GE-13, and when it suited him, relied on them for the success of his own position too (1999).

Dr Mahathir has either forgotten or he thinks we have forgotten.

And that caused a very serious split in Umno that tore the party into two. And that was Dr Mahathir’s third failure. So you see, even before Musa became the Deputy Prime Minister, Dr Mahathir already had three failures. And as they say, three strikes and you are out! But Dr Mahathir chalked up 20 or 30 failures and he still refused to leave the field.

Dr Mahathir now talks as if he chose Musa as his deputy. That is not true one bit. He threw Musa and Tengku Razaleigh into the ring to fight it out like two fighting cocks. And he told Umno to choose who they want and the one that Umno chooses would be made the Deputy Prime Minister.

In fact, Wikipedia has this to say to support RPK's take: When Mahathir bin Mohamad succeeded Hussein Onn as Prime Minister of Malaysia, he declared the election for the Deputy Presidency of UMNO open; and thus by extension the Deputy Prime Ministership — was open; he would not support any candidate.

Razaleigh blamed himself for taking "a rather passive stance" and not having a campaign strategy.

Let me end this post by commenting a bit on both his 'failures' and his nurturing of what Musa Hitam called his 'followers' or yes-men which had led to more 'failures'.

As we know, Mahathir had recently defended Kassim Ahmad against allegations of heresy, and spoken out against PAS' recent push to implement hudud, but we need to ask who had been responsible for opening the Pandora Box in his tactic to outmanoeuvre PAS by proclaiming Malaysia was already a fundamentalist Islamic country.

On above I refer you to what Lim Kit Siang had called Mahathir's 929 and 617 Declarations.

Mahathir's tactical 'gain' in 2001 and 2002, for himself of course, has now developed into serious strategic problem for his successors, more so for Najib rather than AAB who had better Islamic credentials to talk down PAS, wakakaka.

Of course this is only looking at Mahathir's policies from a very narrow perspective, those concerning PAS and the non-PAS mullahs pushing for a full Islamic Malaysia. Overall, Mahathir had not quite acquitted himself well as a PM in other areas. It would take several posts to list all of them; besides, RPK has already posted them in his Malaysia-Today.

Blessed or cursed by Malaysia's then-wealth from oil during his premiership, he unfortunately used that wealth like a 3rd generation Chinese, wakakaka, from which some of the outcomes had led many today (even his critics) to mistakenly believe he did reasonably well for Malaysia. What if Malaysia didn't have oil during his political reign, as in the times of Mahathir's predecessors?

If you want to know what the curse of 3rd generation Chinese is, please ask your Chinese friends or in fact any Malaysians whether Malay or Indian as this story has been well told in Malaysia, wakakaka.

As for his 'followers', more than a few were failures, yet he kept forgiving them, each time helping them picked themselves up to try again, and again and again. Perhaps we should blame that on his administration's 'deep pockets' enabled by the wealth from oil?

The invisible safety net was always there, the humongous rewards were mouth-watering, and Don Corleone was renowned or notorious for his indefatigable tolerance and forgiveness (except to those who were treacherous to him, wakakaka).

His continuous support for his protégés, friends (or cronies) and 'followers' was legend, and had in many cases proved to be a liability to the nation as he sheltered them from falling off the face of the earth.

But I wonder whether that was ‘loyalty’ or a necessity to keep his 'followers' by his side,. Nonetheless I can't let him off scot-free for his most fallible so-called 'loyalty'. I had once written of him: “He chose the lame and therefore he must accept responsibility for their inability to perform.”

In the end he rather than Musa Hitam was the real failure.