Is Anwar guilty or not? 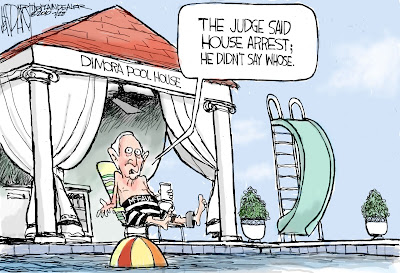 Datuk Seri Anwar Ibrahim should be released from jail and put under house arrest instead, Lawyers for Liberty (LFL) said today, one year after the opposition leader was sent to the Sungai Buloh Prison. LFL executive director Eric Paulsen said the former parliamentary opposition leader suffered from health issues and limited access to medical treatment, adding that his incarceration tarnished Malaysia's reputation.

"In line with Anwar’s status as 'prisoner of conscience' and international concerns that have been raised, we call upon the authorities to release him on house arrest so that he can spend the rest of his sentence in a minimum security correctional facility and for him to receive the medical treatment that is not available in prison."

If Anwar is innocent then he should be freed, and not placed under house arrest or imprisonment. No if's no but's.

But if he is guilty then he must serve time as society requires it. There are medical facilities available for prisoners.

As for the term 'prisoner of conscience' there are many such people, all named by Amnesty International, not our courts.

The point that bears noticing is that Eric Paulsen of Lawyers for Liberty (LFL) has called for Anwar to serve his term under house arrest instead of in prison, and not for Anwar's total release.

Does this mean that Paulsen recognizes the crime Anwar has committed and being found guilty of? And that he is asking for Anwar to serve his time in a more lenient way?

Why is Anwar different from other prisoners? Why should he be treated differently?

By the by, did Anwar, then DPM, consider in 1994 to allow Lim Guan Eng to serve his time under house arrest instead of in prison?