An extract from Malaysiakini's Rafizi, 'system change' isn't replacing one devil with another by MKINI reader-commentator Proarte: 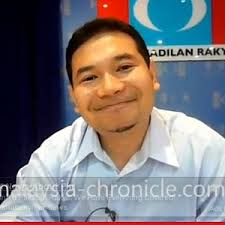 Proarte: "Rafizi stressed that PKR always advocated a system, and not personality change."

Really, Rafizi? Why then has PKR been essentially about one man, Anwar Ibrahim? What real 'reforms' has the bogus 'Reformasi' icon instituted or advocated? What systemic change did Anwar advocate for the past 18 years other than presenting himself as the candidate for PM?

In reality, Anwar and PKR have been so careful not to rock the 'ketuanan Melayu' and 'ketuanan Islam' boat and essentially have been advocating 'business as usual' Umno-style politics but in better packaging. Anwar Ibrahim has defrauded the Malaysian public with his empty talk of 'reformasi' which has no real substance.

Will Rafizi be advocating equal rights for each citizen with a rejection of the notion of 'special privileges' for Malays?

Will Rafizi be urging reforms in the state constitutions which deny non-Malays and non-Muslim the right to be CM despite commanding an overwhelming majority in the state assembly? Surely Rafizi will agree that racism and religious bigotry should not be tolerated.

Rafizi should not give us claptrap like 'system change' without defining exactly what he means. We are sick and tired of sound bites and 'all things to all men' politicians like Rafizi's mentor Anwar Ibrahim.

Bravo Proarte, you've brilliantly exposed Rafizi's (or PKR's) "reformasi" for what it was/has been worth, wakakaka.

Those PKR so-called "reformers" - what a lot of crap they've been piling on us.

While Nathaniel Tan’s ‘only link’ twisted itself into an unhappy, avaricious and treacherous knot of Gordian proportion, PAS and DAP with a combined 30 assemblypersons nominated Khalid Ibrahim as their preferred candidate for the MB position.

Their preference was further endorsed by Dr Wan Azizah Wan Ismail, the party president of PKR, a fortuitous endorsement for some in PKR because it eventually and unwittingly provided a face-saving way out for those against Khalid Ibrahim becoming MB.

But what occurred next ripped the breath of many away as PKR Wanita chief, Zuraida Kamaruddin, unbelievably told DAP and PAS pointedly to stay out on the Selangor MB appointment because, now get this, the post belonged to PKR and it was for the party alone to decide which of its assemblypersons should be MB.

If that was not of ketuanan magnitude, I don’t know what would then be.

In a media interview she exclaimed whether the PAS and DAP state assemblypersons were gila kuasa (power crazy), without even recognising the irony of her accusations.

Mind you, those PAS and DAP assemnblypersons had nominated a PKR person to be MB, not one of their own party members.

If I may, I would like to paraphrase one of Anwar Ibrahim’s recent quotes to address Zuraida Kamaruddin for her belief that the Selangor MB post belonged to PKR, “So you think this is your father’s state?”

The sheer preposterousness of her proprietary claim on the MB position would have been a great joke if not for the disturbing cardinal belief by some in PKR that they possess supreme birthrights above their political allies, an indisputable ketuanan mindset.

Zuraida Kamaruddin has not been the only PKR member who has entertained such arbitrary aggressive and arrogant claim on being the automatic primus inter pares (first among equals) in Pakatan, with a first stake claim on the choicest cut of all Pakatan’s political rights in governments.

For example, the greedy grab of 49 (initially 52) out of 71 seats in the last Sarawak state election was a dismal example of its sad avaricious mentality and arrogant disdain for its Pakatan allies. It was pure grade ketuanan mentality at its worst. The buah langsat certainly hasn't fallen far from the langsat tree.