The spirit of my Bhai lives on! 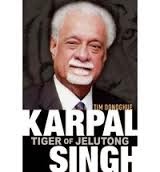 ... in his son Ramkarpal Singh Deo, the MP for Bukit Gelugor.

In a TMI news report titled Working with Dr M to remove PM will be a ‘disaster’, Pakatan told we read (extracts):

“The question of working with Dr Mahathir is an unimaginable disaster waiting to happen.

“There can be no doubt that Malaysia needs to be saved. While I agree that Najib ought to go, I cannot agree with the means by which Dr Mahathir proposes to do so,” Ramkarpal said in a statement here.

“Asserting pressure on a democratically elected prime minister to step down cannot be democratic and it is high time that Pakatan Rakyat come together at this very critical time against Umno and the Barisan Nasional (BN),” the DAP MP added.

Democratic process, through the ballot box - not bloody conniving 916 or dictatorial bullying.

Of late I have been uncomfortable with a few of the DAP politicians' behaviour.

Take for example YB Lim Kit Siang who I had respected almost as much as I respected and adored my Bhai.

He first disturbed me in April 2014 when he posted on his blog a news article MH370 flew inverted to site of acoustic signals, I was very upset because that unnecessary and totally sensationalizing macabre description of MH370 in its final moments would have only added to the miseries and sufferings of the families of those lost on MH370.

Indeed I was very very upset that Lim KS saw fit to post the naughty piece of sensationalizing and unworthy speculation on his blog. What was he trying to achieve if not further politicization of a terrible tragedy? I believe my concerns for DAP was not unfounded. I don't want my DAP to be that sort of political party.

But what troubled me most of all was when I wrote a comment at Lim KS's blog to refute the sensationalizing, it was not posted for days - I checked the time stamps of other comments to find they were made much much later than mine, which meant only one thing, my comment was withheld and would probably be moderated out.

Was this the DAP I respected and supported?

On 09 April 2014 I posted Has Lim Kit Siang ignored my comments at his blog?

I additionally wrote an email to Lim KS' blog to clarify that my comment was purely technical and not political, and asked why it had not been posted. Following that, the moderator, whether YB Lim KS himself or just a blog administrator acting on his behalf, published my comment - see my post Long-ish moderation?

Why did it require me writing in an explanatory email before my comment was published? Was it because my comment would have moderated or ameliorated what had been a macabre and unworthy sensationalizing of MH370's final moments?

The next disappointment had been Lim KS's blind support for an air force major who as a 26-year service veteran could not adhere to Armed Forces Council Instructions about making unauthorized media statements to the press.

Unfortunately there has been a fostered incorrect belief that the major was vindictively punished for blowing the whistle on the very delible so-called indelible ink which the Election Commission had purchased for use at polling stations during the general elections.

Firstly we must be clear that there was/is a monumental difference between a military person making a police report on the useless ink and the same person making an unauthorized press statement about the same subject.

The former is an undeniable right of every citizen including a military person, but the latter is not permitted for a serving military officer unless authorized by the armed forces.

Three (3) military personnel on that occasion each made a police report, but only two were charged by the military. WHY?

Because only two made unauthorized statements to the press (the major and a flight sergeant) whereas the third person did not - She was the wife of the air force major, herself also a serving air force personnel.

Did Lim KS know what he was doing, lending blind support to a naught indisciplined officer who was obviously violating Armed forces Council Instructions and in the process (if not charged) making political mockery of military rules and regulations?

Did Lim KS want to encourage behaviour by our military officers to mirror and eventually grow into those who had illegally-unconstitutionally deposed a democratically elected PM of Thailand?

Depressed, I asked myself then, what Faustian pact is the DAP willing to take up just to get into Putrajaya?

Is there no bottomline for its once-vaunted principles, integrity and democratic observances?

And let's not even talk about DAP supporting PKR in the latter's nonsensical Kajang Satay Deformasi or in an earlier period, the notorious deformasi 916! What horrendous shame on the DAP!

Indeed it was the late Bhai who condemned 916 as immoral and unethical. Got that HY?

And I also hope the DAP won't be that shameful again as to beg for a deputy speaker's appointment in the Selangor DUN for supporting PKR in its recent MB tussle - just how the fuck would that extra appointment have help the rakyat? Yes TP, I cringed in great shame.

And that's why when I read Bhai Junior's admonition, indirectly but clearly against Lim KS for advocating working together with Dr Mahathir to unseat Najib, I sighed a sigh of relief that the spirit of Bhai is back with the DAP.

Just to remind you of what Ramkarpakl said:

“There can be no doubt that Malaysia needs to be saved. While I agree that Najib ought to go, I cannot agree with the means by which Dr Mahathir proposes to do so.”

“Asserting pressure on a democratically elected prime minister to step down cannot be democratic and it is high time that Pakatan Rakyat come together at this very critical time against Umno and the Barisan Nasional (BN).”.


“I am firmly of the view that saving Malaysia can only mean a new clean, accountable and transparent government. Pakatan Rakyat must live up to its promise to Malaysians of being that alternative and democratically oust Najib and the BN through the ballot box.”

Amen! and have you got that Uncle Lim?
Posted by KTemoc at 8:03 pm