Is Gerakan an UMNO branch?

Prior to the 2008 general election I was cruel in my criticisms of Koh Tsu Koon, calling him by a name I swore not to use against him again after he showed good manners, civility and courtesy to an (then) incoming Lim Guan Eng as the new CM. Ah Koon demonstrated himself as a perfect gentleman in the art of Westminster politics. He has indicated he won't be with us in the next GE.

However, I am not sad to see him go because as a BN man he is really not suited for Malaysian politics where you need to be as ruthless, vicious and cunning as … er … one of those BN leaders (present, past and former, wakakaka). Ah Koon is your typical nice and polite Penang boy but he lacks the necessary self-confidence, assertiveness and incisiveness to be a strong political leader.

But what I’m sad to see is the continuing demeaning and humiliation of the Gerakan Party by UMNO. I read in The Malaysian Insider’s Najib finally names Chang Yeow as Penang BN chief the following:

Koh, who recently renewed his term as a senator, had announced that he will not take part in coming general election after BN-linked media spoke about the need for changes in the multi-racial party. It is understood that the view in Putrajaya is that the mild-mannered Gerakan chief should step down as head of the BN component party before the general election if the coalition is to have any chance of wresting back Penang from PR.

I doubt it was the view in Putrajaya but rather an order, meaning from UMNO.

While it is the ultimately the right of the BN Chairperson to decide on and name the BN’s Penang chief, it is not the BN Chairperson’s business to 'suggest' (order lah) the Gerakan Party presidential incumbent should step down, even if the reason is to provide the BN a better prospect of winning the next state and general elections in Penang.

It must be the Gerakan Party itself, and not outsiders, which may decide whether its president should step down. In other words, that should have been a Gerakan Party's internal issue.

But the component parties in the BN have become so subservient to UMNO that it proves my point (which I had blogged on previously), they are merely non-Malay ‘branches’ of UMNO.

I take this opportunity to also advise the MCA and indeed the Gerakan and MIC to bear in mind that the Barisan Nasional is a coalition and not UMNO with several non-Malay affiliates or branches. Therefore MCA (and Gerakan and MIC each) should stand up as a sovereign party that is a full partner in a coalition or alliance. Don't behave like a subordinate branch of UMNO.

What does this entail then?

While the BN as a party should of course, as far as possible speak out together on policy issues, the operative term should be ‘as far as possible’, meaning there may be times the MCA should be able, and indeed dare to speak out differently on an issue of interest to the community or constituency it represents.

When there is a general or state election pending, the seats should be allocated not just as per a coalition formula BUT through meaningful negotiations among the parties. In other words, there is no such thing as the BN chairperson (meaning UMNO) dispensing seats out like Father Christmas and MCA and Gerakan keeping mum.

Also and very importantly, the selection of candidates to seats assigned to MCA shall be only at the discretion of the MCA leadership and should never ever be subordinated to approval by the BN chairperson (eg. Hulu Selangor where the MIC president was humiliated as being no more than a mere UMNO branch leader).

It’s an insult that MCA candidates have to be approved by an UMNO man.

Take our current example being discussed – let’s hypothetically assume that Ah Koon is unaware of his weak leadership, becomes uncooperative at being told to step down and refuses to do so, then that’s entirely for the Gerakan Party to deal with it, for its party members to decide, if they believe Ah Koon should go. It is certainly not for UMNO and Najib to decide, where they should keep their bloody nose out.

Of course then it can be Najib’s prerogative as the BN Chairperson to select another person to be the Penang BN Chair, and it he/she is not from Gerakan, so be it.

The point is Gerakan is not an UMNO branch for Najib to decide who should be its party president, because for him to do so would be the ultimate insult to the Gerakan Party. It is even worse than the BN Chairperson, effective an UMNO man, approving the selection of component party candidates (say Gerakan Party candidates) to seats assigned as the share of that component party (Gerakan).

But Najib and his predecessors have been able to do that at will because those non-UMNO component parties have been willing captives, even to the gravest insult to their respective party sovereignty (or total lack of). Thus, they have only themselves to blame for their cringing serf-like mentality.

The one thing good about some Japanese is their sense of, and commitment to, honour and their willingness to demonstrate that commitment in its ultimate form, seppuku. 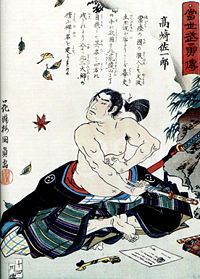 But I doubt such a thought would even enter the heads of those Gerakan leaders - unlike Dr Lim Chong Eu who left Perikatan (BN's predecessor) and even MCA because he refused to agree with Tunku's allocation of seats for MCA.


For a start those Gerakan leaders might not even recognize the insult to their Party's sovereignty and dignity, having been conditioned for the last 40 years to accept such abysmal servitude from TaiKoh.


And if they do recognize it, they will keep mum, swallow their pride and accept that insult as, I suppose, quid pro quo for their party's continuing (and lucrative) membership of BN. They have been perceived to be no longer with any sense of basic honour.

Alas, as a member of a family which used to adore, and was ‘Satu Hati’ with Dr Lim Chong Eu’s Gerakan Party, I have to sigh and wince as those Gerakan members play lapdog to UMNO, yapping happily when they are handed some small scraps or receive a pat on the heads.
Posted by KTemoc at 6:31 pm