It was said that there was a time when Chinese Malaysians numbered almost 50% of Malaysia’s population. Following illegal (but) instituted influx of Indons and Suluks, coupled with low birthrates and migration, today they numbered less than 30%.

No doubt they're good at business, but as citizens of this nation, what have been the highest official offices they had attained thus far?

In the cabinet the real/meaningful posts are of course firstly the Prime Minister - and forget about DPM because in the general case, the most senior and important minister gets the appointment – in the Australian Coalition the leader of the other party in the Coalition is automatically the DPM though they don’t use this title frequently – the Finance Minister (or Treasurer), Home Affairs, Defence, Foreign Affairs, and only in Malaysia, Education.

Tan Siew Sin was Finance Minister and a highly valued colleague of both Tunku and Tun Razak.

Well, we know no Chinese or Indian will be PM for at least another 25 years or even more, and quite frankly the Chinese don’t give two hoots, though recently I read several Indian NGOs demanded that at least the CM of Malacca should be an Indian wakakaka.

Why did I just wakakaka? Do you know who’s the current and likely still to be the next CM?

Wakakaka again and please read my October 2007 post The total humiliation of PPP - a lesson for BN parties, where I wrote: Alas, for Kayveas and most of all for his PPP members, it was hardly surprising that they were resoundingly, abjectly and severely humiliated to no ends at their Malacca annual general assembly on Monday by an UMNO vice president.

Malaysiakini reported that their guest of honour, yes, the PPP’s guest of honour, Ali Rustam, the Malacca Chief Minister who was invited to officially open the assembly, sneeringly told the PPP to get out of Barisan Nasional now if the party wishes.

He spat out while gesturing at the PPP totally gobsmacked delegates: “PPP can leave BN. All of you can leave. Either today or tomorrow. Why wait until the general election? What’s there to wait for?”

Needless to say, Ali Rustam’s ‘shock & awe’ sneaky attack on a BN component party has left Kayveas and his members totally humiliated (I need to say this word 'humiliated' again), enraged and probably in tears – in tears because as I had blogged last year, Ali Rustam had said what kaytee had predicted, though to be frank, I didn’t expect such a cruel publicly executed UMNO low kick to a helpless PPP’s groin.

And those idiots are clamouring for an Indian to deprive vicious Ali Rustam from his CM seat wakakaka.

So, other than Finance Minister, had or has any Chinese from MCA or Gerakan or one of those numerous mosquito parties in BN ever become minister of Home Affairs, Defence, Foreign Affairs or Education?

I wonder what will be the chances of a Chinese Malaysian ever becoming a minister of one of these ministries including Finance, or even Chief of the Armed Forces, Army, Navy, Air Force or IGP Police when Pakatan sits in Putrajaya as the new ruling coalition? Wakakaka.

Maybe we should go lower in status.

What about CM other than CM of Penang? Well there was somebody (can’t remember his name wakakaka) who was temporarily CM of Sabah in a bullsh*t rotating/shared CM position of Sabah which ends up with an UMNO man seemingly in permanent appointment, so we may disregard that bullsh*t.

So it’s only the CM of Penang which Chinese Malaysians may expect to be appointed … and if BN wins Penang State next (when the sun rises in the West wakakaka) we may expect that too to go to an UMNO man, probably one who (as Sakmongkol AK47 termed them) sells rancid curry wakakaka.

But does anyone know that once … yes, once upon a time long long ago … there was actually a Chinese Yang DiPertua Negeri or Governor of … wakakaka, of all places … Malacca.

From 1957 (on Independence) until 1963, Tun Leong Yew Koh was the first and only Chinese Malaysian Governor (Yang DiPertua) of a State in Malaysia.

Of course he was a MCA larng, and though born in Malaya, probably had strong connections to the Kuomintang Party of China (now Taiwan). Leong was a very close matey of Tunku, both being law students in UK. When Tunku formed his pre-Independence cabinet he selected Leong to be his Health & Social Welfare Minister, and subsequently recommended his appointment as Governor of Malacca.

We read that Leong spurned a British knighthood offered to him before Merdeka, saying: "I will only kowtow to the sovereign King of an Independent Malaya, not a foreign Queen."

Today very few Malaysians know who was Leong Yew Koh, and I suspect they include the many MCA members.

Though I asserted that not many Malaysian Chinese gives a f* about Chinese being appointed to high government position unless those appointees and/or ministers can help them (the Chinese community) in commerce and education, I have to say many Chinese Penangites have always bemoaned the fact no Chinese has been appointed as the Yang DiPertua Negeri of Penang.

One has to ask, why not?

Does it have to take only an UMNO man like Tunku to do so?

Obviously we must have a Yang DiPertua Negeri of impeccable standing. We don’t want someone with scandals like CSL wakakaka, Samy Vellu wakakaka, Anwar Ibrahim wakakaka or Hishamuddin wakakaka. And God forbid clowns like Ibrahim Ali, Hasan Ali or Apdal or even cop-biting Tian Chua wakakaka.


I personally don't mind even a non-Penangite like the legendary Lee Lam Thye but alas many Pakatan people hate him (for mindless reasons a la 'either you're with us or against us'), especially those mindless moronic Myrmidons who were still sucking rubber or plastic teats when Lee Lam Thye was already labouring away breaking his back and his old trusty (non-electronic) typewriter performing unsurpassed (even until today) sterling service for the Kuala Lumpureans, without biting cops or merely mouthing manmanlai, wakakaka.

Candidates for such Heads of States’ posts would be usually exemplary senior (retired) public servants, former diplomats or military leaders with a distinguished career, outstanding citizens, etc, or even former senior politicians (hopefully without any ‘controversies’ attached to their CV wakakaka).

Some 25 years, when Mahathir became PM, there was a fantastic candidate for the Penang YDP post, but alas, with Mahathir in control (with his BIG chip on his shoulder) that would be an unrealistic expectation not unlike what the Chinese would say ‘sai goo barng gueh’ (a rhino dreaming of the moon, or badak rindu bulan).

7 years ago I wrote of and alluded to this in my post Canada's Enlightening Example, pointing out to Canada and Australia’s excellent examples.

Even earlier, I also posted in my other blog, BolehTalk, Non-Malay Yang Di-Pertua Negeri for Penang & Malacca?

I trust under the Abdullah Bawai Islam Hadhari government, we may soon see a more equitable sharing of the position of Penang Head of State among the various ethnic groups. But I don’t want to see a BN party ‘extra’ being booted up into this post just to keep him or her out of the political arena.

The candidate must be Penang-born for the Penang gubernatorial appointment and of course Malacca-born for the Malacca equivalent. Preferably we should have a non-political person. However, a former political life, if distinguished, should not be an automatic barrier for selection. There must not be any discrimination on the basis of gender, age, ethnicity, religion, former political affiliation, profession (except for illegal ones), background (poor or rich), as long as the candidate has a distinguished career.

Who would be the likely future candidates for both Penang and Malacca?

I can straightway think of one distinguished Penangite – read here to know who. Admittedly the person is rather advanced in years, but as I have said, we shouldn’t discriminate on the basis of age – instead we should cherish the person’s experience, wisdom and profound knowledge of life.

[Unfortunately since 2005, that Star Online article referred to in my above link who (about PG Lim, the sister of the better known Lim Kean Siew) had been archived and I don't have privileged access. Please read  instead the Bar Council's The woman that is P.G. Lim]

In a Malaysiakini article Plumbing for Bersih at book launch, to launch her memoirs (that of a legal luminary, according to MKINI), we've been informed that she’s in fact 96. 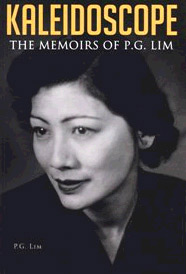 Malaysiakini reported: Pleasant surprise segued into admiration when Toh [kin Woon] listed the achievements of the Cambridge educated Lim, now 96, who broke several “glass ceilings” as one of the country’s first female political and social activists.

Toh remarked that Lim had deserted her class (meaning, social class) - she was born in London to wealthy parents (her father was from Penang and mother from British Guyana) who met while they were studying in Cambridge during the First World War - to make common cause with Malaya’s (and later Malaysia’s) working class.

Lim represented people condemned to death for sedition and espoused the cause of trade unions fighting for better wages and working conditions.

Toh’s comments were not lost on an audience aware that the fast approaching general election is being viewed as a contest between the appropriative capitalism of BN and the social democracy of Pakatan Rakyat.

But the legal doyenne whose memoirs was being lauded confined herself, in a brief video that was shown of an pre-book launch interview she had given, to terse and playful remarks on the nature of the autobiographical art and of the life she had lived.

It was a reminder that levity is an aid to longevity.

It’s a monumental loss to Penangites that we missed her leadership, probably the best Chinese Penangite candidate ever as our State’s Yang DiPertua (Dr Lim Chong Eu could have been another). Karpal Singh, when he retires, will be a marvellous Indian YDP of Penang to grace us.

I blame Mahathir for the (no doubt as I would suspect, deliberate) oversight in not recommending Ms P.G Lim, a Malaysian giant (though not an UMNO's Towering one) for the post of YDP of Penang about a quarter of a century ago.
Posted by KTemoc at 9:02 pm