Gerakan advisor and former party president Lim Keng Yaik has been gnashing his teeth and tearing off his hair when he saw his party president-successor Koh Tsu Koon deliberately avoiding his own party’s EXTRAORDINARY meeting to decide on the Penang Gerakan leadership crisis, and preferring instead to attend rival MCA’s annual general meeting.

Koh is now the laughing stock of not only BN component parties but the entire Malaysian political world. Which party president avoids a party crisis, and worse, which would do so to instead attend a rival party’s annual meeting?

Keng Yaik has been right to criticize Koh TK as an ostrich – to put it crudely, a bird which by burying its head in the sand to avoid facing reality, automatically positions its behind in a suggestive way to ... perhaps ... its UMNO master?

Others have been less restrained, insulting Koh as a boe-larm-p’ar, to wit, a capon or in Penang lingo, eam kay - wakakaka. 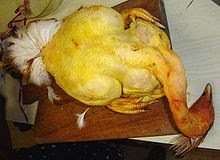 So, you now know how he had been when he was CM Penang, allowing his UMNO so-called deputy to run the entire show on top of his head.

In 2006 I posted Penangites want to trade off Koh Tsu Koon! where I not only lamented his cringe towards UMNO but compared, nay, contrasted him with MCA’s Ong Tee Keat. In that post I predicted Ong Tee Keat would be ‘ousted’ for his outspoken defiance of UMNO, unlike Koh’s perpetual servility.

How the once-mighty Gerakan has fallen. I reckon it’s the end of a road for the party, which started off with a glorious bang 40 years ago but will now end in similar fashion to another once-glorious political party, the PPP, with a whimpering fizzling-out.

In the late 60’s the most exciting party was, hard to believe today, the Gerakan Party, founded by a group of intellectuals and high profile politicians, giants like:

.. the late Tan Sri Dr Tan Chee Khoon, a former leader of the Labour Party who was respected even by UMNO as Malaysia’s Mr Opposition,

... lawyer V. Veerapan, a renowned trade unionist and also another former leader of the Labour Party, and

... Dr Lim Chong Eu, former MCA President who, it was said, was manoeuvred by Tunku out of the MCA and Perikatan (Alliance, the predecessor of BN) because the PM wanted a more compliant MCA leader whom he found in Tan Siew Sin.

In 1969 the Gerakan swept Penang by crushing the MCA in a landslide as it itself was to be similarly crushed by DAP-PKR 40 years later. It did well in both state and federal seats, commanding a significant presence in Penang, Perak and Selangor, and frightened the hell out of UMNO. Tun Razak saw it as the most intimidating and serious threat to the Perikatan. He had to do something about the Gerakan.

Unfortunately for Gerakan, Dr Lim Chong Eu as CM in an impoverished post-May 13 Penang State had to eventually take his party into a new coalition called the Barisan Nasional in 1972 on Tun Razak's urging for minimal-politicking ‘national unity’. Only the DAP, sensing the likelihood of a powerful smothering UMNO, refused to join the BN. It decision was to be proven right - just evaluate the Gerakan's continuously diminished stature since 1972 to what it is today.

When Lim Chong Eu joined the BN, many of Gerakan's founding members left in disagreement, disappointment and disgust, where then Dr Tan Chee Khoon formed the unsuccessful (single-MP only) party Pekemas, but nonetheless he was highly respected for standing steadfast and valiantly outside a corrupt and UMNO-dominated BN.

Many of our elders, like my uncles and his friends, still bemoan that if not for May 13, the truly multiracial Gerakan Party would most likely have become the ruling party by the late ‘70s or early ‘80s, with probably Professor Syed Hussain Alatas as the PM. Maybe that's why May 13 occurred.

But alas, the dreams of many Penangites of the late 60's were not to be, as we have seen how the once-glorious party had metamorphosed into its current sycophant status as

UMNO’s sweetheart (or bum boy), a tragic case of 'past midnight' and Penang’s Cinderella turning back into a ... er … kay (a Penang word best left in its Hokkien form as some sweeties may be reading this).

Mind you, Lim Keng Yaik hasn’t been entirely blameless. A MCA reject, he brought his MCA ways into Gerakan and gradually diminished (not sure whether by design or accident) the multiracial character of the party. The Malays eventually disappeared from Gerakan while some Indians hung on as convenient senatorial window dressing for Lim’s party.

Like it or not, Penangites do have a special place in their hearts for Gerakan, well, Lim Chong Eu’s Gerakan to be more correct, and weren’t all that ecstatic about the party’s power base moving from Penang to Perak when Lim KY became president.

But alas, local boy (Penangite) Koh Tsu Koon was the worst of its leaders, a man who didn’t have the heart, backbone or larm-p’ar to head a party that has since 1972 been seeking a more meaning role in Malaysian politics.

While many Penangites (and no doubt MCA and PPP's Kayveas wakakaka) will be happy to see the party close its final chapter, they also feel a certain sadness in seeing its once-fave party, a what-could-have-been, dying in the most inglorious manner.