Root of evil in Malaysian politics

Raja Petra Kamarudin of Malaysia-Today also posted the existence of a nefarious intent in The tried and tested route of history, illustrating UMNO’s modus operandi in exploiting fear, anger and ethnic prejudice to marshal the Malays, this time behind AAB.

As my blogging mate, renown blogger Susan Loone in her post Malaysia mad with arrests, 23 nabbed including teenager said: “Whenever UMNO is at its lowest and weakest points, instead of tackling business in-house, it diverts attention and attacks others. No wonder the rot in UMNO continues.”

She also concluded that “… someone wants the prime minister to look really bad. And the stupid guy (meaning the PM) just falls into their trap.”

I had similar thoughts in my Uneasy lies the head that wears a crown where I expressed my suspicion that there’s internal strife in UMNO. A creature is at its most dangerous when wounded and cornered.

But my modest post, mainly queries of what could be going on deep within UMNO, pales into insignificance when I subsequently read Raja Petra’s lavishly detailed Losing the plot, where he mentioned the current undercurrent (excuse the pun) acrimonious struggle between former PM Dr Mahathir and PM AAB.

Raja said what most Malaysians who follow politics closely would say, that the only way for UMNO to fall would be from within. As a near example of that occurring, he quoted the Mahathir-Ku Li schism and the splitting of old UMNO into new UMNO and Semangat 46. He had already alluded to the ongoing chess moves between Dr Mahathir and AAB.

And may I also add to that the 19898 UMNO split which arose after Anwar Ibrahim was chucked out of UMNO. In fact I dare say that caused more than just an UMNO split as it divided the Malay community especially when the anwaristas in UMNO went on to form KeADILan a la Semangat 46.

The only brilliant strategic move in AAB’s reign was his release of Anwar Ibrahim from prison and allowing the latter to go abroad for his spinal surgery, where in one fell swoop, he (AAB) healed the Malay divide and neutralised Anwar’s role as a magnet for opposition to UMNO.

But alas, since then, he has squandered all the goodwill, including those from the Chinese Malaysian community who had believe in him as a modern day Bao Gong.

So, battered from the shockwaves caused by a combination of rotten advice from his closest confidantes, party factionalism, chipping away of his authority from within and coincidentally a renaissance of NGO socio-political activisms (whether hijacked or not, or wannabe), the cornered rat has, as Dr Jeyakumar warned, spied remedy in capitalising on Hindraf’s melodramatic allegations and extreme demands to shore up Malay support. For added measure, he threw the harmful ISA at the harmless Hindraf leaders.

In some ways, AAB has succeeded in arousing his desired ethnocentric reactions. UMNO did get together with PAS for secret talks, though in Malaysia no political secret exists. Some Malay activists who have asserted stakeholder claims in opposition politics demonstrated very little if any sympathies for Hindraf’s struggle, even criticising the Indian-based Hindu movement as chauvinistic in character. Some ironically and most unjustly (or with extreme bias) condemned the Indian protestors as violent even after the latter including some innocent bystanders were bashed by the police.

And of course, kaytee being kaytee, I cannot help but recall Anwar Ibrahim’s advice to Hindraf not to campaign against the ethnocentric Article 153. For more, please read Hindraf H-bomb blasted veneer off opposition multiracial mask.

Talking about UMNO history of schisms, and my comment that AAB has squandered all the goodwill gained from his release of Anwar Ibrahim and a promise for clean politics (what an obscene word is his ‘clean politics’ now!), I reckon it all boils down to one issue – avarice

The 'cake of power' and all its attendant ‘icing’ aren’t big enough for divvying up to everyone's satisfaction despite a multitude of multi-billion ringgit contracts and deals, because the appetite, thirst and hunger of UMNO members have greatly inflated.

As a nation, we have certainly ‘advanced’ from the days when the Prime Minister, then Tengku Abdul Rahman, would take opportunity of his official trips to Kedah to buy cheaper goat meat there for his wife.

What would he have thought if he were to read my post Ijok - glimpses of Vision 2020? 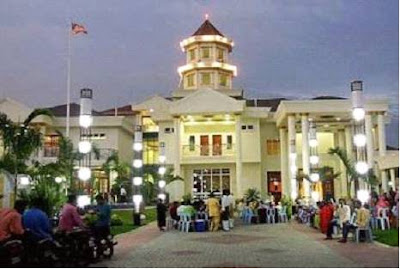 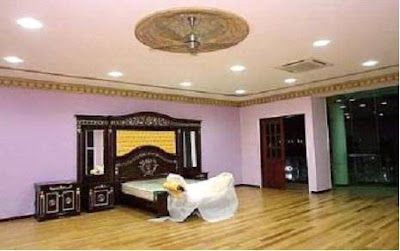 excessiveness - does one need a room of this size?